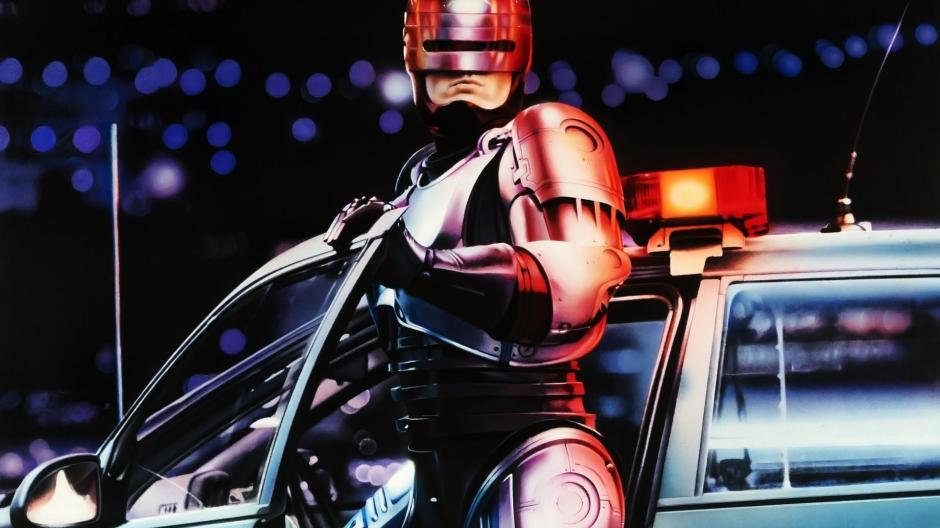 REPORTER – “Robo! Excuse me Robo, any special message for all the kids watching at home?”

ROBOCOP – “Stay out of trouble.”

What can be said about Robocop that hasn’t already been said? Probably that it’s a satirical medieval-themed romp about an enchanted candlestick. And that’s probably because it isn’t entirely accurate.

Still, I might as well throw my opinion into the endless ocean of praise it’s received since its released back in 1987, just in case you’ve already heard 17,000 people say it’s great and you’re the sort of person who isn’t convinced unless you’ve heard 17,001.

Robocop is set in a futuristic version of Detroit, where crime is high and the city is in tatters (top marks to screenwriters and probable soothsayers Edward Neumeier and Michael Miner for their spot-on prediction skills).

Hotshot cop Alex Murphy is transferred to the city to work for the DPD, the privately owned police force struggling to keep Detroit’s crime under control.

Murphy’s plan to help clean up the city goes noticeably breasts-up almost immediately when he heads out on an assignment and finds himself face-to-face with Clarence Boddicker, a crime boss who also happens to be a bit of a prick, having already killed 31 cops.

It’s therefore no surprise when Boddicker and his gang, who are a dab hand at offing officers, proceed to gun down Murphy, reducing his body to numerous tiny pieces in a most brutal firearms-based reprise of the Black Knight scene from Monty Python And The Holy Grail.

Left with little more than a head and torso, Murphy’s all but dead, which is probably just as well because unless I’m mistaken, it’s not possible to get employment as a real-life foosball character.

There’s still hope though. OCP, the corporation that runs the police department, is planning to use a massive sentry droid called ED-209 to ride Detroit of crime. Sadly, ED-209’s initial boardroom demonstration fails spectacularly when it malfunctions and pumps endless bullets into an OCP bigwig in a gratuitous shower of blood.

This leaves room for another exec, Bob Morton, to step in and suggest OCP go with his own project: Robocop. The idea is to take cops who have been killed in the line of duty and put their head inside a robotic body.

That way you’d get a cop with the invulnerability of a machine, but the mind and smarts of a former pro cop. Now, If only there was some sort of police officer who had recently been reduced to no more than a mannequin at a wig shop…

Murphy’s head is promptly plonked into its new metallic home, and Robocop is born. Well, built. Either way, it’s a second chance for Murphy, but not before his memory is almost entirely erased. Mind the word ‘almost’ there, it’s going to be important in a bit.

At first it seems making Robocop was a good idea. On just his first night on duty, he stops a newsagent from being robbed and prevents an attempted rape. Not too shabby.

The problem is, he’s starting to get his memories back. He starts remembering how he used to be a person, how he used to have a family, and how he was gunned down by Boddicker and his men. What happens next? Well, that’d be telling and that.

It goes without saying for anyone who’s seen it, but Robocop is a tremendous film. It’s one of the few 80s action movies that appeals to a relatively wide range of audience sensibilities.

But crucially, it also speaks on a more intellectual level, with plenty of commentary on the likes of business practices, the privatisation of public services and the dumbing down of TV news (the hilariously lighthearted way background news reports deal with deadly serious world incidents is sadly still relevant nearly 30 years later).

Peter Weller is also brilliant as Murphy / Robocop. Oddly, he’s at his best once he’s been robofied, as he manages to somehow deliver a deliberately wooden and monotone performance yet still show there’s a glimmer of life and part of a human still hiding away in there.

If you haven’t seen Robocop yet you’re doing yourself a great disservice. If you’re a teenager and it was released long before your time that’s fine, I understand.

But I promise you it’s as relevant today as it was back in 1987 and it’s a damn sight better than the remake that, while still entertaining enough, was missing that certain something.

Yes friends, this is the droid you’re looking for.

Robocop’s rating earns it a place in the hallowed That Was A Bit Mental Hall Of Fame. Click here to see which other films have made the grade.

HOW CAN I SEE IT?
Robocop is currently available on both DVD and Blu-ray in the UK. You can also get it as part of the Robocop Trilogy, also on DVD and Blu-ray.