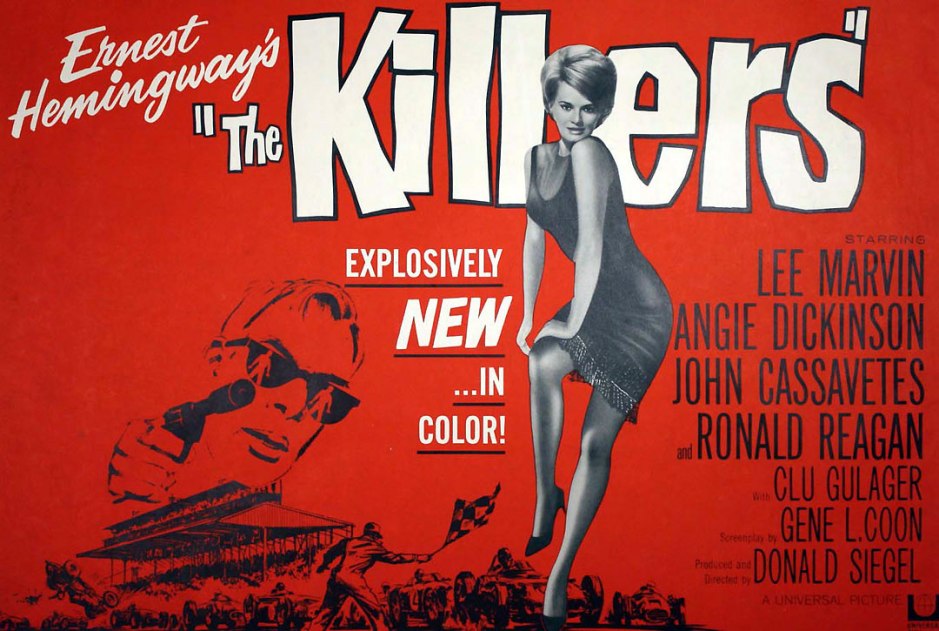 “It’s not only the money. Maybe we get that and maybe we don’t. But I gotta find out what makes a man decide not to run. Why, all of a sudden, he’d rather die.” (Charlie, The Killers)

I’ve never been a professional hitman (*taps nose*) but I’m sure if I was I wouldn’t be surprised to see most of my targets leg it as soon as they noticed their time was potentially up.

Charlie (the legendary Lee Marvin) shares my opinion. That’s why, after being hired to put a hit on a guy said to have stolen a million dollars, Charlie is curious to know why said chap didn’t try to run away before he was shot down.

Eager to know what’s going on, Charlie and his hitman partner Lee (Clu Gulager) begin a line of enquiries that see them visiting a string of friends – and enemies – of Johnny North, the man he was paid to kill.

Eventually Charlie begins to piece together Johnny’s backstory: who he was, how he got involved with a “thrill-happy dame” (Angie Dickinson) and her dubious friend Jack (Ronald Reagan), and how his relationship with both changed drastically.

To say any more would spoil the plot and I’m being more careful than usual not to do this with this review, because The Killers is so heavily reliant on its narrative and the way its flashbacks link together that to go into too much detail would make it far less engaging when you watch it (which you should).

What I will talk about though, with great pleasure, is The Killers‘ outstanding cast. Rosemary’s Baby star John Cassavetes is brilliant as Johnny North, the racecar supremo who slowly falls for the woman of his dreams.

You really want to root for Johnny – he’s a likeable guy and he’s down on his luck – and a great deal of that is down to Cassavetes’ endearing characteristics.

Meanwhile, Dickinson smoulders as Sheila, the woman Johnny falls for. Her confidence and the way she plays Johnny like a two-bit pinball machine make her one of the stronger characters in the film, and the one the plot ultimately revolves around.

Then there’s good ol’ Ronnie Reagan as Jack, Sheila’s friend. Though he doesn’t have much of a presence during the first half of the film, he soon becomes a crucial character as it reaches a climax.

Interestingly, years later Reagan said The Killers was his least favourite film, because it was the only time he played a villain and he was particularly ashamed of a scene in which he slaps a woman.

It’s a shame he feels this way, because of the films I’ve seen starring Reagan, this is easily the most impressive I’ve seen him.

By far the real star of the show, however, is Lee Marvin as Charlie. His piercing stare and deadly serious voice makes every single one of his lines sound like the most important thing you’ll ever hear, and he’s just such an intimidating character it’s impossible not to be impressed by his screen presence.

There’s a telling example of this given in one of the extras provided on the recently released Arrow Video Blu-ray of The Killers (which was viewed for this review).

Apparently Clu Gulager, who plays Marvin’s sidekick, wanted to have various affectations and quirks as he acted, to give his character a little more depth and make him more interesting.

“That’s fine, kid,” Marvin reportedly told him. “Everyone in the audience is going to be watching me anyway.” Cocky as fuck, but you’d better believe he was completely right. It’s impossible to watch a scene with Marvin in it and not be utterly focused on him.

The Killers was supposed to be the first ever made-for-TV movie, but a combination of its violent content and the recent assassination of President Kennedy meant this plan was scrapped and it was released in cinemas instead.

Looking at it now it may seem pretty tame, but bear in mind American cinema in the ’60s was still very sensitive. After all, this was only a few years after Psycho broke taboos by showing a flushing toilet for the first time on screen.

The Kennedy assasination and Reagan’s subsequent political career also combine to inadvertently make one of its scenes look oddly dodgy in hindsight.

You see, near the end of the film there’s actually a scene where Reagan’s character shoots someone (no spoilers) with a rifle from the window of a nearby building.

The parallels between this scene and the Lee Harvey Oswald / JFK incident are especially poetic these days, when you consider the scene essentially shows a future President of the United States killing a man in exactly the same way a past President was (allegedly) assassinated.

The Killers is a brilliant ’60s crime drama and is still well worth watching 50 years after its original release. It does away with any extraneous nonsense and provides a tight narrative, full of plot twists and heaving with outstanding performances from both its leading and supporting cast.

The Killers’ rating earns it a place in the hallowed That Was A Bit Mental Hall Of Fame. Click here to see what else made the grade.

HOW CAN I SEE IT?
UK readers who want to see The Killers will have to have a Blu-ray player, as the only readily available version is the recently released Arrow Video Blu-ray. It’s a cracking disc though, with over an hour of interviews and the option to watch the film in its original intended TV aspect ratio or the widescreen cinema ratio.

As for US readers, The Killers is currently out of print so you’ll have to stump up a chunk of change for the Criterion Collection DVD. As with all Criterion offerings it’s pretty definitive, with the 1946 version starring Burt Lancaster also included.