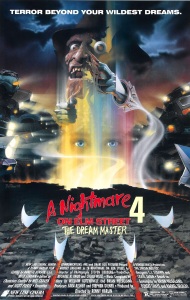 “You shouldn’t have buried me. I’m not dead.” (Freddy, A Nightmare On Elm Street 4: The Dream Master)

When A Nightmare On Elm Street 3 was released in 1987, the character of Freddy Krueger truly took off and started to become a household name.

This was partly thanks to his character’s evolution which saw him become more of an anti-hero than an outright villain.

Whereas in the first film he was a strictly sinister creation – a child murderer stalking the dreams of those whose parents killed him – by the third movie Freddy was busting out one-liners and making people scream with laughter rather than terror.

The inevitable fourth film, knocked together in less than a year, continued this trend by offering an even more wisecracking, fun-loving Freddy… with the fright factor taking another knock as a result.

However, as a shameless Nightmare On Elm Street devotee, I’m not fussed in the slightest. Hey, if you want objectivity, visit the BBC.

Following on from the events of Part 3, The Dream Master opens with surviving characters Kristen, Joey and Kincaid released from the asylum they were staying at and living back with their families in Springwood.

However, Kristen is worried, and not just because she’s no longer played by Patricia Arquette, who had fallen pregnant and had to be replaced. She’s been having dreams about Freddy’s house again, and is convinced he isn’t truly dead yet. After all, it wouldn’t be much of a movie if he was.

Sure enough, ol’ Scarface himself returns through the oddest method I think I’ve seen in a slasher film: Kincaid’s dog, who’s in his dream with him, pisses fire on Freddy’s remains, bringing him back to life.

Regardless, now he’s back Freddy has unfinished business: killing those three survivors. Kincaid pegs it and Joey soon follows but just as Freddy’s about to kill Kristen, she uses her special ability to bring her friends into her dreams, pulling new chum Alice into the mix. Still with me?

As she dies, Kristen tries to send Alice her dream-pulling abilities, but Freddy gets in the way and nicks them instead. Using Alice’s dreams, Freddy now has a way of finding and killing even more kids, starting with her other friends.

There’s a twist though, one that emerges as the film progresses. You see, Alice has her own special ability she didn’t know about: as her friends die in her dreams, she gains their skills.

So when kung fu expert Rick dies, she gets his kung fu powers. Look, I know, this isn’t exactly Argo.

The first and third Nightmare On Elm Street films are widely regarded as the best of the bunch, but I’ve got a bit of a soft spot for the fourth one too. Part of this is because its dream sequences are perhaps the most imaginative in the series.

A particularly memorable sequence starts with Alice falling asleep at the cinema and being sucked into the screen, finding herself in a rundown diner and meeting an elderly version of herself, who serves up a pizza containing little screaming heads as meatballs.

Another cleverly traps Alice and her new chum Dan in an endless loop – the classic deja vu dream many of us have – while her other friend is turned into a human cockroach. All fairly bizarre stuff, I’m sure you’ll agree.

By this point the series had gotten to the stage where the actors’ performances weren’t really that important, since it was known that one man alone was being relied on to carry the film.

Sure enough, Robert Englund once again shines as Freddy Krueger. Ditching the dark side of the character almost entirely (well, other than the fact he kills teenagers), Freddy’s got more one-liners than a Stewart Francis gig.

One poor lad falls asleep on his water bed and dreams that a supermodel is swimming around naked inside it. Up pops Freddy who kills him, asking: “How’s this for a wet dream?”

Another unfortunate young lady suffers from asthma. When she dozes off in class, Freddy becomes her teacher and, asking “wanna suck face?” gives her a kiss that sucks all the air out of her body, suffocating her.

It’s bizarre set-pieces like this that set the Nightmare On Elm Street series apart from other slasher franchises in the ’80s, which were limited to at least some degree of realism.

The likes of Friday The 13th and Halloween kept horror fans satisfied with countless gory kills, but Jason could never turn invisible and have a kung fu fight with someone, and Michael Myers could never transform into a doctor to kill someone in their subconscious while they’re sedated at a hospital.

The above is perfectly supported with some fantastic pre-CGI special effects, especially Freddy’s incredible death scene in which the souls of the kids he’s killed burst out of his chest and pull him apart.

But more than that, I appreciate that the film, like the rest of the series, relishes in the freedom Wes Craven’s original idea gives it and the sheer imagination on display. And I love that it’s clearly having a good laugh with it, with a sense of humour that’s contagious.

A Nightmare On Elm Street 4: The Dream Master‘s rating earns it a place in the hallowed That Was A Bit Mental Hall Of Fame. Click here to see which other films have made the grade.

If it’s a DVD boxset you’re after, the best one is the New Line Platinum Series set. This was released in the US in 1999 and is still in print, mainly because it’s a fantastic box set with loads of extras including a DVD game packed with loads of other interview snippets. The UK version has everything except the game and as such is still well worth the money.

It currently isn’t available as part of any major streaming service, but can be bought or rented from Blinkbox along with Parts 1-3, Part 5 and the 2010 remake.