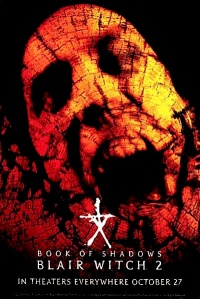 JEFF – “If you don’t believe in the Blair Witch then why the hell did you come along?”

KIM – “I thought the movie was cool.”

After The Blair Witch Project sold out cinemas and soiled boxer shorts around the world, a sequel was quickly greenlit to capitalise on its massive success.

There was one hefty problem, though. Part of what made the first film so successful was the fact it came out of nowhere.

Here was this film about young filmmakers who had gone into the woods and disappeared, and crucially it had this found-footage style that made many cinemagoers question whether what they were seeing was actually fiction.

Realising (perhaps wisely) that lightning probably couldn’t strike twice in the same place, director Joe Berlinger and the rest of the Blair Witch 2 crew instead decided to ditch everything that made the first film a success and go in a completely different direction.

The result is a film that abandons the handheld found footage technique and opts for a more traditional, big(gish) budget style, complete with beautiful stars, daft special effects and a star-studded soundtrack.

Book Of Shadows is set in an odd pseudo-reality. Imagine if the first film had indeed been released but its events were actually real: that’s the situation here.

It initially opens with various media clips from MTV, the Tonight Show With Jay Leno and the like discussing the phenomenon of the first movie, then shows us how the residents of Burkittsville are coming to terms with their sleepy little town’s newfound success as tourists come from all over the world to visit the famous Blair Witch locations.

But then we meet our five protagonists, who are planning to visit the site of the house at the end of the first film, and it quickly becomes clear that in this universe those three original filmmakers were real people who actually disappeared, and not just actors having their careers ruined in front of our eyes.

The leader of the new gang is Jeff, a troubled lad who’s just been released from a Maryland mental hospital and now runs a Blair Witch tour. His latest customers are practicing witch Erica (but she’s a good witch who practices Wicca so it’s okay), goth psychic Kim, and Stephen and Tristen, an expectant couple researching the Blair Witch for a book they’re writing.

The quintet make their way to the ruins of the house and spend the night there, after which shit quickly begins to go down.

They wake up the next morning, with no memory of what happened the previous night. Perhaps not a big surprise given that, to quote David Brent, “el vino did flow”.

They soon discover that all their papers and equipment have been destroyed, and Tristen has miscarried. After discharging her from hospital, the group decides to go back to Jeff’s ‘home’ (which is a massive abandoned factory) to rewatch their recovered footage and try to piece together what happened.

As if things weren’t bad enough, Jeff receives a call from the local sheriff informing him that a rival tour group has been found mutilated in the woods and Jeff and his chums are prime suspects.

This is the exact point where I’m sure the original shooting script has this written in it:

You see, this is the moment where things just stop making any sense at all, and the only logical explanation for any of it is “that’s the Blair Witch fucking with you, mate”.

If you’re hoping for some sort of resolution that provides a ‘eureka’ moment at the end to explain all this, you might as well be hoping that the next series of The Great British Bake-Off won’t have adverts.

Here’s the thing though. I don’t mind Book Of Shadows. Granted, it’s a complete fucking mess, and not a lot of it makes sense.

The director even knows this is the case – listen to his commentary on the DVD for a perfect lesson on what happens when a studio takes over your well-crafted movie and adds all manner of shit to it, making it incomprehensible in the process.

At one point near the end one of the characters screams “THIS IS BULLSHIT!” and it’s hard to tell whether it’s a scene from the movie or a behind-the-scenes outtake showing the actor’s response to hearing the plot outline for the first time. 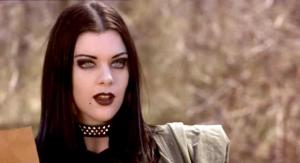 But there’s still something oddly endearing about a film that gives negative fucks about wrapping things up with a neat Hollywood ending, and instead has its audience wondering what the hell just happened.

Was it the Blair Witch? Did what happen really happen? And why is there not even a single reference to a Book Of Shadows at any point in the whole movie?

The answer is a resounding ¯\_(ツ)_/¯ and for some reason I’m totally cool with that.

I even like the bizarre ‘Secret Of Esrever’ gimmick the studio slipped into the film after shooting, in which a bunch of scenes were digitally manipulated to have secret messages and images added to them.

If you enjoyed the original Blair Witch Project and expect Book Of Shadows to follow relatively faithfully in its footsteps, you’ll be in for a massive disappointment.

Other than the opening 10 minutes or so with all the ‘look what the first movie did to Burkittsville’ stuff, the rest of the film might as well be a standard spooky horror yarn with nothing whatsoever to do with the Blair Witch lore.

Go into it expecting a cheesy B-movie other than a Blair Witch sequel, then, and you may be pleasantly surprised by the bizarre and unexplained goings-on that… um, go on.

As the credits roll you’ll still be none the wiser about whether the Blair Witch is real. But one thing you will know for sure is that Book Of Shadows is a bit shit.

If you’re happy to expect this, you may find yourself facing another mystery, one even more bewildering than the Blair Witch myth itself:

How come you’re actually enjoying this a wee bit?

HOW CAN I SEE IT?
Book Of Shadows: Blair Witch 2 was only ever released on DVD. You can buy it here. I’m keeping my fingers crossed for a Blu-ray trilogy box set once the current Blair Witch reboot leaves cinemas though.