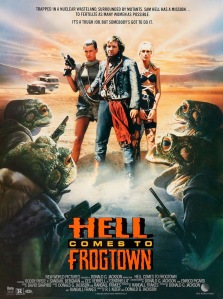 Hell Comes To Frogtown has one of the greatest premises in film history.

It’s set in the future, after a nuclear war has turned America into a sort of Mad Max/Fallout post-apocalyptic wasteland. Due to the radiation, the world’s population is either dead or sterile.

That is, except for a handful of females scattered throughout the land and one man, Sam Hell (wrestling legend Rowdy Roddy Piper).

Hell is captured by the government and told he has to travel around the country, having sex with as many of the fertile women as he can so he can re-populate the planet.

A big pair of explosive underpants are attached to Hell and he’s told that if he tries to escape they’ll explode. Suprisingly, Sam doesn’t seem too happy with this agreement for some reason.

He’s also none too pleased when he’s told that a group of these nubile, fertile young women are being held prisoner in Frogtown, an area populated by mutants who have evolved into walking, talking frog people, and that he has to head into Frogtown and rescue them.

The resulting 85 minutes is a collection of mental scenes. One minute you’re watching Roddy Piper kick the shit out of a giant frog man, the next he’s riding around in a big armoured pink truck, the next his doctor is doing a special dance for the leader of the frogs, who becomes visibly aroused (yes, complete with a noticeable froggy erection). It’s just bizarre.

Credit has to go to the film’s script, however. It’s filled with great one-liners, especially during the back end of the movie, and the over-dramatic ham acting really adds to the dialogue. Here’s one of my favourite scenes as an example:

Hell Comes To Frogtown is crazier than a dolphin filled with cheese, but it’s a good laugh and one you should watch if you’ve got some chums willing to watch.

It’s odd in that it feels like it should be in the “so bad it’s good” camp alongside the likes of Troll 2, even though its production quality is reasonably high.

One thing’s for sure however – after one watch this will definitely blast its way into your top five post-apocalyptic frog mutant films. Check out the trailer below and tell me you’re not interested.

HOW CAN I SEE IT?
Until recently, the only way to get Hell Comes To Frogtown in the UK was to buy the out-of-print DVD which was released as part of Boulevard Entertainment’s B-Movie DVD Collection series.

That all changes on 27 January when Arrow Video release a brilliant dual-format Blu-ray/DVD set featuring a new transfer and loads of extra features.

Arrow’s easily the best label at the moment when it comes to cult and horror releases and I can happily confirm its treatment of Hell Comes To Frogtown is immense. The interview with Roddy Piper in particular is brilliant. I highly recommend you pre-order it here.

As for the US, I’m afraid it’s DVD-only for now. You can buy it standalone here or get it in a double-bill with Def-Con 4 here.