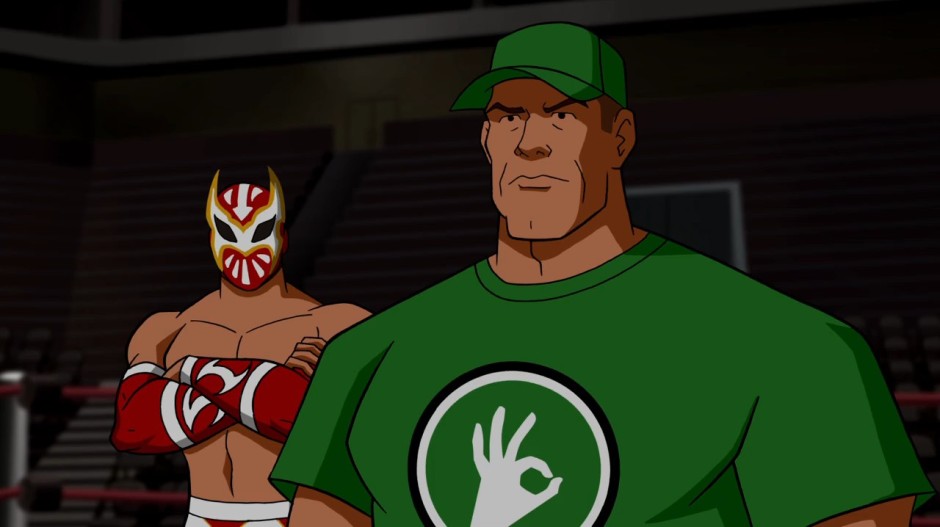 “Sin Cara believes the spirit of the beast has been stirred by Wrestlemania itself, which is why the monster is risen from the grave to have its revenge. But fear not. It is now Sin Cara’s honour and duty to continue his great great great grandfather’s legacy and protect WWE City at any cost.” (John Cena, Scooby-Doo! Wrestlemania Mystery)

Some crossovers make complete sense. The Jetsons Meet The Flintstones was the perfect fish-out-of-water scenario times two, while Freddy Vs Jason was the natural clash of two of horror’s biggest icons. Ditto Alien Vs Predator with sci-fi, and Mario & Sonic in gaming.

But sometimes you get a crossover that seemingly resulted from two darts being randomly thrown at a massive list of pop culture names and licences.

In the past this apparent method has resulted in the likes of Archie Meets The Punisher, Charles Barkley Vs Godzilla and now this, a bizarre mash-up of Scooby Doo and Vince McMahon’s World Wrestling Entertainment. And you know something? It’s half-decent.

Scooby Doo! Wrestlemania Mystery opens with Shaggy and Scooby playing a WWE video game. You know, the made-up one with a bizarre dance mini-game at the end for seemingly no reason other than to fit into the plot later on.

After he gets the highest possible score in the dance-off, a message tells Scooby and Shaggy that they and their friends have just won a trip to Wrestlemania.

This being a work of fiction (unlike the WWE itself of course, which is still real to me, dammit), Wrestlemania isn’t held in a normal arena like it is in actuality. Instead, it takes place in WWE City, an oddly massive urban paradise situated in the middle of the woods.

As well as its massive arena complete with equally enormous WWE logo on the roof, all of WWE City’s shops and restaurants are wrestling themed. It’s basically what would happen if Vince McMahon had sex with a Disney Village. Look, I don’t know how you have sex with a village – I’m the words guy, not the logistics guy.

So far so good then, but all is not as it seems at WWE City. You see, it turns out there’s a massive ghost bear prowling the city’s outskirts, maiming anyone who dares enter the surrounding woods.

It’s claimed this bear is the ghost of some sort of beast defeated by WWE superstar Sin Cara’s ancestor, and that’s why it’s seeking revenge on the WWE.

Of course, this being a Scooby Doo film, you know for a fact that when all’s said and done that bear’s going to be revealed as some prick in a mask. The question is, which prick?

There are plenty of suspects to choose from, as a bunch of WWE superstars feature in the film, lending their own voices to proceedings. The likes of Kane, Triple H, John Cena, The Miz, Brodus Clay, Michael Cole, Santino Marella and AJ Lee all star, as does Mr McMahon himself.

There are also brief cameos from older wrestling icons for the benefit of any adults watching. Jerry Lawler, Sergeant Slaughter and Jimmy Hart pop up for a short while, which is a treat.

Surprisingly, the whole thing also manages to come off relatively well without sounding too much like a shameless WWE advert.

Of course, the word ‘WWE’ is uttered with unusual frequency, there’s never a bad word said about the company and Scooby and Shaggy more or less dissolve into quivering wrecks of unnecessary excitement any time they’re near a wrestler, but for the most part it isn’t too in-your-face.

There’s even a spot of action near the end as Scooby and Shaggy take to the ring to fight against an opponent I’m not even going to consider spoling for fear of breaking your tender heart.

Scooby Doo! Wrestlemania Mystery is far more enjoyable than it probably should have been. I had the feeling it was going to be one of those films that sounded amazing on paper but ended up being a complete mess in practice once the creative types who came up with the title suddenly realised they had to work a storyline around it.

Instead, it’s a competent little film that should keep the young ‘uns (and young at heart) entertained, though naturally if they’re a fan of the WWE they’ll get far more out of it.

HOW CAN I SEE IT?
Scooby-Doo! Wrestlemania Mystery is available on DVD in the UK and on both DVD and Blu-ray in the US.