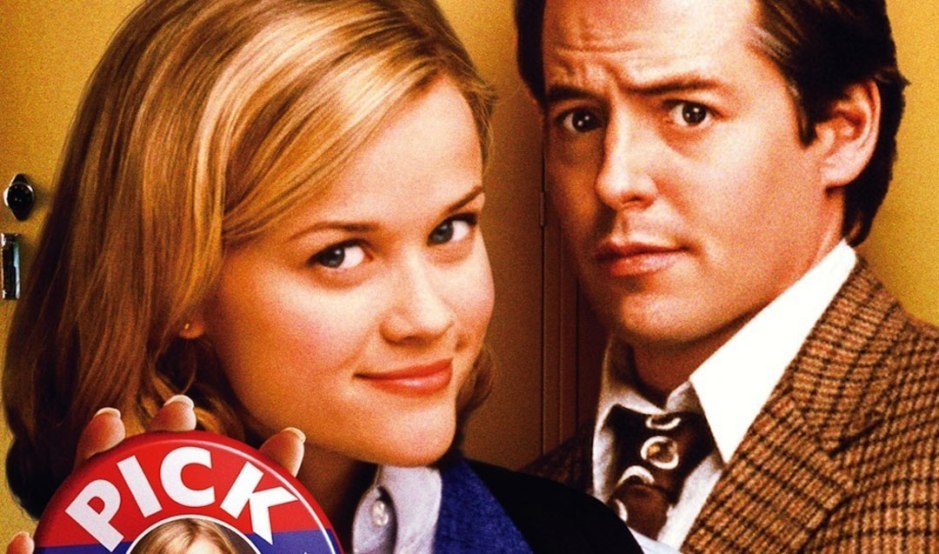 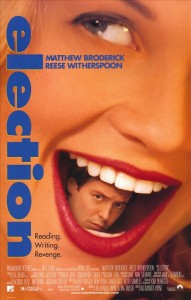 “Dear Lord Jesus, I do not often speak with you and ask for things, but now I really must insist that you help me win the election tomorrow because I deserve it and Paul Metzler doesn’t, as you well know.” (Tracy Flick, Election)

With Reese Witherspoon recently being nominated for a second Academy Award for her performance in Wild, I thought it would be a good time to review my favourite of her films.

Writer/director Alexander Payne is perhaps best known for his Oscar-winning Sideways or his Oscar-nominated Nebraska.

Back when both films were still a twinkle in his eye, though, he wrote and directed Election, a brilliantly sharp satire about classroom politics.

It stars Ferris Bueller Matthew Broderick as Jim McAllister, a high school teacher loved by pupils and colleagues alike. Teaching is more than just a job to him, it’s a massively rewarding way to educate, inspire and prepare his students for adult life.

Having said that, even the greatest teacher in the world will still have an annoying pupil or two, and for Jim that dubious distinction goes to Tracy Flick (Witherspoon).

Tracy is that know-it-all, want-it-all arsehole everyone had in their school: the one who answers all the questions, joins all the extra-curricular clubs and, in this case, takes student elections far too seriously.

For Tracy, becoming student body president is everything and so when election time comes around again she’s there early doors on day one, campaigning straight away with posters, pin badges, cupcakes and like.

Jim isn’t having it though, because he knows Tracy’s secret side. A year earlier, she seduced and dated another teacher, Jim’s friend. The teacher was fired, and Tracy was let off the hook.

Not willing to see her stand unopposed for president – and concerned his own urges might lead to a similar situation if he’s made to work alongside her more – Jim encourages dumbass jock and all-round nice guy Paul Metzler (Chris Klein, pre-American Pie) to also throw his name into the ring.

Complicating matters further is Paul’s lesbian sister Tammy who, jilted by her hetero friend who fell out with her and started going out with Paul to spite her, decides she’ll also run for president just so she can disband the entire system and fuck things up. Naturally, she becomes a popular candidate.

At first, then, Election‘s premise seems like your standard teen flick plot: three students with wildly differing personalities run for president, with the big question being who will win.

But then things start to go downhill rapidly for Jim, and instead the film reveals its main focus: the downfall of a once great man who gives in to temptation.

Falling for his fired friend’s ex-wife, Jim gives in to temptation and cheats on his own wife with her. Who then subsequently finds out.

And, determined to ensure Tracy doesn’t win the election, he gives in to the temptation to rig the vote when it becomes too close to call.

Suddenly the viewer is presented with a dilemma: who’s actually the protagonist here? Almost everyone in this film is at least a bit of a prick.

You’ve got a teacher who cheats on his wife and tries to sabotage something a student’s worked so hard on.

You’ve got a manipulative student who uses her popularity to get ahead in life while hiding her hidden past in which she ruined another man’s life (and in a particular scene in which she discusses it with Jim it’s clear she knew what she was doing).

You’ve got an arsehole principal who ignores the students suggesting the election’s been rigged and blindly stands by his employee because his word is apparently more reliable.

In fact, the only decent main characters in the film are the jock (even though he’s as dumb as an envelope) and his anarchic sister, but by the time you realise this you’ve already spent most of the film rooting for the wrong people.

This is all thanks to Alexander Payne’s brilliant script. Making liberal use of voiceovers (Jim and all three candidates take turns to narrate the story) we’re given numerous different, entertaining points of view of the same situation.

The result is an engaging narrative that jumps between cynical (Jim), arrogant (Tracy), hateful (Tammy) and charmingly naive (Paul), but never dull.

Despite its teen-friendly setting it also choose not to shy away from some of the nastier sides of high school life, with even a rogue c-bomb thrown in there for good measure (a rarity in American cinema).

Performances throughout are more or less spot-on but Witherspoon shines brightest of the bunch. The viewer spends a great deal of the film trying to decide whether their feelings for Tracy verge more on the side of scorn or sympathy, and that’s thanks to Witherspoon’s perfect delivery of every line, action and nuance.

Election is a teen high school film that’s far more satirical, cynical and venom-laced than the sort of thing you’d expect from, say, a John Hughes movie. Prepare for nastiness and you’ll have a brilliant time with it.

Election‘s rating earns it a place in the hallowed That Was A Bit Mental Hall Of Fame. Click here to see which other films have made the grade.

HOW CAN I SEE IT?
Election is only available on DVD in the UK, whereas in the US you can get it on either DVD or Blu-ray. In terms of streaming, it was recently added to the US version of Netflix, and can also be bought or rented on Blinkbox in the UK.