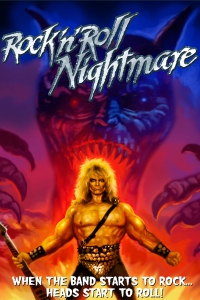 Also known as: The Edge Of Hell

“You killed no one, Bub. Or is it less familiar to call you Beelzebub? Or do you prefer Abaddon? Or, as the Hindus called you, Shaitan? Or, as you are known to answer to, Ahriman? Belial? Apollyon? Asmodeus? Because, you see… I do know you.” (John Triton, Rock ‘n’ Roll Nightmare)

Well, now. Where to begin.

If you aren’t aware of Jon Mikl Thor, his Wikipedia page describes him as “a bodybuilding champion, actor, songwriter, screenwriter, historian, vocalist and musician”.

Having now watched Rock ‘n’ Roll Nightmare, which was both written by Thor and starred him in the leading role, I’m almost tempted to edit that page and remove “actor” and “screenwriter”.

From 1976 Thor was in a Canadian heavy metal band named… well, Thor. A decade later the band broke up and he decided to get into acting instead.

Rather than going down the usual route of finding an agent and auditioning for roles, Thor fancied himself as something of a jack of all trades and so decided to write a script for a movie that he would both star in and produce.

The result is Rock ‘n’ Roll Nightmare, one of the most charmingly terrible and batshit films I’ve seen in a long time.

The movie opens with an unbearably long sequence in which John Triton (Thor) and his band Tritonz are driving in a van (it turns out this sequence was shot later when it was discovered the film’s runtime was too short).

Eventually the van pulls up at an isolated farmhouse, where Tritonz plan to spend the next couple of weeks to record their new album. The barn’s been transformed into a recording studio, you see.

It quickly emerges that all is not well though, because it seems the farmhouse is constantly being haunted by an evil force, one that may actually be the devil himself.

Shot with a budget of only $100,000, Rock ‘n’ Roll Nightmare is fantastically shonky in every category.

The quality of acting ranges from merely ‘bad’ to ‘for every second I continue watch this, countless pieces of my brain are eroding into dust’.

This is thanks to the four band members (including Thor himself) and their female companions, one of whom is apparently meant to be the sex-bomb female band member who drives all the male fans crazy but is actually rougher than a hedgehog’s arse.

The ‘worst actor’ award quite clearly goes to Jim Cirile though, who plays Stig. He’s a New York actor who tries to give his character an Australian accent but ends up sounding like a deaf person doing a Downton Abbey impersonation.

This being a movie written by and starring a heavy metal singer, it should come as no surprise that Rock ‘n’ Roll Nightmare is saturated with Thor’s music.

The action stops a number of times throughout so that Tritonz can perform a song in their barn, and even when they aren’t practicing there’s almost always a radio somewhere in the background to keep a constant bed of Thor music on the go.

It’s certainly a decent enough distraction from all the z-grade special effects being unleashed (you’ve never seen so many fake foam heads), and the copious helpings of frankly mediocre nudity.

Said skin-showing culminates in one of the most unnerving shower sex scenes you’ll ever see, where you get frequent glimpses of Thor’s spotty bodybuilder arse as he darts his tongue into his unfortunate co-star’s mouth like a lizard playing a special insect-based version of Whack-a-Mole.

All of this pales in comparison, though, to the film’s final act, which contains the most fucking insane twist ending in the history of cinema.

Spoilers follow, but trust me: even after I tell you what happens there’s a chance you still won’t believe me.

After the demon who possesses the house works its way through the other band members and their lady friends, only Thor is left. The demon reveals itself to be the Devil himself, but Thor has a surprise for him too.

Stunningly, it emerges that Thor is actually an archangel with magical powers, and he conjured up all the other band members and women as illusions to draw the Devil out of hiding.

He then proceeds to strip down to the tiniest bodybuilding outfit imaginable and wrestles with what’s clearly a plastic-looking demon doll for about 10 minutes, until he finally defeats it with the immortal words: “I’ll see you again, old scratch.”

Oh, and while this is all happening, a bunch of smaller demons who look like penises with faces look on with concern. Because of course they do.

I genuinely can’t decide whether to recommend Rock ‘n’ Roll Nightmare to you.

I’m happy I got to experience it, if only so I can tell people I’ve seen both the worst shower scene ever and the oddest ending ever.

But you have to go through so much shite to get the good stuff that you really have to have a high level of B-movie tolerance to get the most out of it.

Watch it alone and you’ll struggle. But get a group together and give it a go, and you should manage to have a good time with this one.

Rock ‘n’ Roll Nightmare is mental enough to make it into TWABM’s special Proper Mental List, a section dedicated to the very maddest films featured on the site. Click here to see what other insanity it joins.

HOW CAN I SEE IT?
This’ll no doubt stun you but Rock ‘n’ Roll Nightmare isn’t available in the UK. You’ll need to import the US DVD instead (but only if you have a multi-region player, mind). You could probably find the whole thing on YouTube if you looked hard enough but I couldn’t possibly direct you to it because that would be dodgy.

SHOW ME THE TRAILER:
Um, there isn’t one. So here’s a clip of Thor being attacked with rubber starfish.