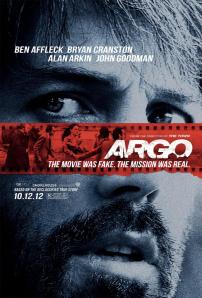 “Okay, you got six people hiding out in a town of what, four million people, all of whom chant “death to America” all the livelong day. You want to set up a movie in a week. You want to lie to Hollywood, a town where everybody lies for a living.

Then you’re gonna sneak 007 over here into a country that wants CIA blood on their breakfast cereal, and you’re gonna walk the Brady Bunch out of the most watched city in the world?” (Lester, Argo)

Regular readers of this site will have gathered by now that I don’t often go for the heavier stuff. Life’s serious enough as it is without having even more terorrism, war and courtroom drama thrust in your eyeholes, so that’s why I’m generally more Motel Hell than Hotel Rwanda when it comes to film taste. Still, I do appreciate a good film no matter what genre, so when Argo gathered a lot of attention at the Oscars I thought “Ar, go on then” (sorry).

It’s based on the real-life story of the ‘Canadian caper’, an extraordinary event in which a man was sent into Iran and tasked with getting six American diplomats back to the US while an anti-American revolution was ensuing in the background.

You see, years prior America had been backing Mohammad Reza, an Iranian shah (king) who had made life miserable for Iranians for many years. When the Iranians revolted the shah fled and America allowed him to travel there for medical treatment. Iran wanted him back so the entire country could kick the living pish out of him, but the US refused, so the Iranian people went apeshit, started massive street protests and stormed the US embassy, taking 52 of its workers hostage as they tried to destroy any incriminating files.

Six workers escaped unnoticed, though, and sought refuge in the Canadian embassy building (in real life they actually stayed at the British embassy too, but that was omitted from this film). While the Canadian ambassador kept them hidden in his house, he and the CIA (though mainly the CIA, according to this film – more on that later) came up with a plan to get them back to the States undetected.

The plan was Argo, a fake science fiction movie set up by the CIA to act as cover. After hosting a fake press event and posting fake ads for it in movie magazine Variety (to create a convincing alibi should anyone be questioned), CIA operative Tony Mendez (Affleck) was sent to Iran to find the Canadian embassy and tell the six what was going on. The story was that all seven would pose as Argo’s film crew, on a location scouting exercise to see if it was worth shooting in Iran (so to speak).

Mind you, as the film shows, there are just a few problems with this plan. The first is that in order to prove they were location scouting, the group actually need to go out into Iran’s busiest marketplace and walk around, taking photos, without being spotted or causing an incident. The second is that if they manage this and get to the airport, they’re likely to be heavily grilled so their story needs to be watertight.

Finally, the Iranians have set up a sweatshop to put together the shredded papers found at the US embassy, and they’ve started working on the documents that contain the staff’s names and photos. Before long, the missing six’s faces are going to be known to the Iranian police, making a return to America impossible. And you thought flying with Easyjet was a nightmare.

It could be argued that at two hours in length, Argo is technically an hour and a half too long. I’ve essentially just told you the whole story, all that remains is to see whether they get through the marketplace and the airport without incident and that’s the film done and dusted, so in theory it could have been crammed into a short half-hour TV drama. In doing so though, it would have lost a lot of what makes it so outstanding, primarily its tension.

Ben Affleck’s name alone has been a running joke among ‘knowing’ filmgoers (partly fuelled by the Team America song explaining in no uncertain terms why he’s terrible) but I’ve always liked him, and Argo shows he knows what he’s doing behind the camera as well as in front of it. Every shot is meaningful, every nervous glance tells a thousand words, and every anxious moment of suspense builds the tension ever tighter until the whole bloody thing’s about ready to burst.

During the final twenty minutes I was dangerously close to breaking into a sweat, something that’s never happened to me while I’ve watched a film (although The Sexbendables came close*).

All the cast are flawless, to a man (or woman). Affleck is eminently likeable as Mendez (though my obvious man-crush on him may sway my opinion somewhat), John Goodman and Alan Alda are hilarious as the Hollywood producers who help with the fake movie, Bryan Cranston is brilliant as Mendez’s supervisor, and the six actors playing the would-be escapees are believable as a terrified group, uncertain if this ridiculous plan will work. They also look remarkably similar to the real-life  group of six, as evidenced during the end credits where the real-life and movie characters are shown side-by-side.

The only real niggle I have with Argo is something I didn’t even know until I read up more about the actual incident after watching the movie. While the film seems to make out that the plan is essentially the brainchild of the CIA, in reality – as then-president Jimmy Carter has since said in an interview – it was more the case that Ambassador Taylor at the Canadian embassy in Iran was responsible for 90% of the operation.

Changing history to make things seem a little more “America, fuck yeah” is a sneaky move (as does one that paints Iran in a very negative picture), even in a film that opens the country up to criticism at the start.

Its tinkering with the facts aside, Argo is a breathtaking film filled with enough tension that by the end of it you’ll be too scared to go to the shops in case you’re ID’ed for beer and end up cracking. Go see now.

*Disclaimer: The Sexbendables is not a real film, though with every day that passes I wish a little more that it was.

HOW CAN I SEE IT?
Argo was released a couple of months ago. UK peeps, here’s the DVD

. It’s too new to appear on LoveFilm or Netflix, but Americans can stream it from Amazon Instant Video here