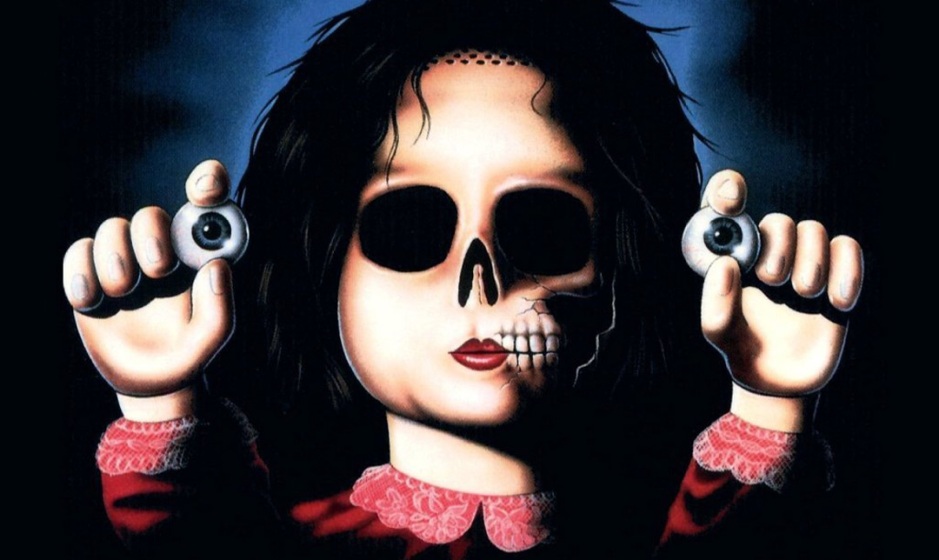 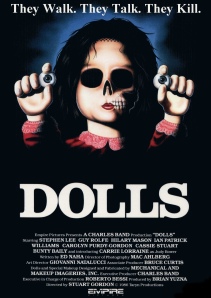 RALPH – “You know, I can remember every toy I had as a kid.”

GABRIEL – “And they remember you, Ralph. Toys are very loyal, and that is a fact.”

This may appear to be your fairly bog-standard review of a cheesy ’80s horror film, but for me this review is a confrontation of my childhood fears and a firm “up yours” to many a sleepless night.

You see, when I was a young sprog of around five or six, I used to go with my dad to the local library to rent videos. Usually I’d end up with something suitably child-friendly but for at least a year there was a cardboard standee in the corner that used to scare the living piss out of me.

The offending display simply showed the poster image you see to the side of this text. The word ‘Dolls‘, along with an image of a doll holding its eyeballs in the air. It was also accompanied by the UK VHS tagline: “They want to play with you”.

We never rented Dolls, but that image alone was enough to terrify me. I couldn’t sleep for months thinking about that doll. It was one of the reasons that, ironically, I despised horror films when I was young.

Years later my dad tried to make me watch Clint Eastwood’s critically acclaimed war film Hamburger Hill, but when we started watching it there was a trailer for Dolls at the start of the video and I broke down, refusing (in my young and innocent way) to watch the film in case it had anything more to do with Dolls in it.

So now, as a man of 30 years of age, I’ve finally won my 25-year battle with Dolls and watched the film that made me a nervous wreck for so much of my childhood. And, as is usually the case in stories like these, it turns out it’s tame as fuck.

It tells the tale of Judy, a young girl going on holiday with her dad and stepmother, neither of whom are particularly fond of her and would much rather she wasn’t there.

When their car breaks down in a dark country road during a massive rainstorm, the trio run to a nearby mansion in the hope that someone there will be able to give them shelter.

Luckily for them, the mansion is owned by a kind old couple, who used to make dolls back in the day. Judy’s parents are as disrespectful and thankless as you can get, but Judy is delighted by the couple’s generosity and is happy to have someone want to look after her for once.

Before long the group are joined by three more people seeking refuge from the rain – friendly portly chap Ralph and two British girls, who are secretly robbers planning to steal Ralph’s wallet and leg it when the rain goes off.

As you’d expect, it isn’t long before things start getting a little unnatural. The audience is informed of this long before the mansion’s visitors are, with shots of the dolls turning their heads to keep an eye on their new guests.

That night, one of the English girls can’t resist exploring the house to see what she can steal.

Not too chuffed with their owners’ hospitality being betrayed like this, the dolls spring to life and dish out some pint-sized punishment, taking her up to the attic and turning her into a life-sized doll.

Its therefore up to Judy and Ralph to not only stop the dolls before everyone pegs it, but to convince Judy’s parents and the remaining English girl that the dolls are indeed alive.

Dolls is a silly film, with impressive special effects for its budget that make up for the generally low standard of acting. It’s also got a charming little musical score by the fantastically named Fuzzbee Morse.

Without wishing to spoil too much more, the final twist in which it’s revealed what’s actually making the dolls alive is just batshit crazy.

Crucially, it’s also the moment I realised how silly my fear of this film had been, that the dolls I’d been scared of all these years were in fact something that was, quite frankly, pretty fucking dumb.

This revelation aside, I’d recommend you give Dolls a watch. At a brisk 77 minutes it’ll whizz by pleasantly quickly, and it’s got some decent set pieces that, daft ending aside, should make you smile.

HOW CAN I SEE IT?
Dolls is only available on Blu-ray in the UK, having recently been released by 101 FIlms. It’s a decent quality transfer, offering a commentary by director Stuart Gordon. In the US, you can only get it on DVD.