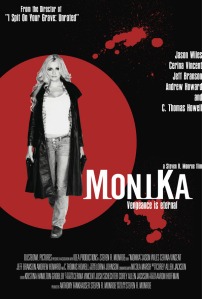 MONIKA – “That would appear to be the case.”

It’s said that during the filming of Star Wars, Harrison Ford turned to George Lucas and, frustrated by its flowery script, moaned: “You can type this shit George, but you sure can’t say it.”

The same accusation can be aimed directly at MoniKa, which has some of the least realistic dialogue I’ve heard in a while. It didn’t bother me though, because hokey script aside it’s a decent little film.

When we’re introduced to the protagonist, Reagan, he’s lying hungover in his bedroom. A call from his friend Double (who’s a famous actor: in the film, of course, not real life) sets the ball rolling when it’s suggested Reagan should fly to Nevada to stay with him for a while and “have some fun” with the sister of a lady friend he’s started getting frisky with.

Off Reagan goes to Nevada, then, but before he manages to find Double he encounters said sister, Monika. She suggests they go to the local bar to try and find Double and her sister, but when it turns out they aren’t there the couple instead start getting to know each other.

One thing leads to another and the two go back to Monika’s motel room to do the no-pants dance. Reagan is smitten, and he’s convinced things are finally starting to look up for him. The end.

Only kidding, that would be a shite ending. Instead, Reagan wakes the next morning to find Double and Monika’s sister. The latter is in a state of shock, and the reason why is a doozy: her sister – the one Reagan was smuggling his sausage inside last night – was shot dead the day before. Whaaaaaaaaaaat.

Not entirely sure how he could have dated and mated with a corpse, Reagan isn’t completely convinced that all is as it seems. He goes off on a hunt to find Monika, and things get a little crazy when he actually does.

You see, it turns out Monika is still sort of alive, but it’s only her ghost. She explains that when she was alive she had stolen money from a dodgy gang, and without that money the gang is going to take out their frustration on Monika’s sister.

Reagan needs to help Monika deal with the gang, then, before her soul can finally rest in peace. But it’s a bit weird because, unlike most other movie ghosts, everyone can see and interact with her. It’s an odd premise then, but an interesting one when handled well, which it is for the most part.

Monika (Cerina Vincent, who once played the yellow Power Ranger) is a curious character. She’s attractive in an unconventional way, making it easy to see why Reagan would be smitten by her even if we don’t necessarily feel the same way.

She’s compelling to watch in that she knows everything (the whole business with the gang and the money) and yet, at the same time, she doesn’t (she has no clue why she’s seemingly a ghost).

Speaking of the gang, they’re undoubtedly the weak point of the film (other than the aforementioned dialogue). The numpty who’s involved with Monika is bad enough but the boss, played by Andrew Howard, is perhaps the worst British gangster cliché I’ve ever seen in a film.

He may be played by a genuine Brit – Howard is from Cardiff – but it’s unclear why he keeps switching between Cockney and American accents at random.

That script, though… Jesus. As with Ford’s Star Wars quandry, I have no doubt that written down in a screenplay (or, even better, in a novel) the dialogue would have seemed very clever and thoughtful. But something happens to it between there and the screen, and when the needless hyperbole starts streaming out of Monika and Reagan’s mouths it’s about as realistic as Sweden’s chances of winning the World Cup (they didn’t qualify).

Right at the end (no spoilers, don’t worry) the film comes dangerously close to closing on a brilliant twist.

The final scene is a bit of a rollercoaster: at first you think you’ve been hit with one of the biggest, most clichéd cop-outs in film history, but then there’s a genunely clever twist that, had it ended there, would have been a perfect way to conclude.

Instead, not content with one shit twist and one clever one, it decides to try the shit one for a second time before rolling the credits. Infuriating doesn’t begin to cover it.

Get past its niggles – the overly flowery dialogue, the varying acting ability, that bloody triple ending – and MoniKa is a decent effort with a lovely art style and a brilliant soundtrack. Those with a relatively high tolerance for ball-dropping should check it out.

HOW CAN I SEE IT?
MoniKa was recently released on DVD in the UK by 4Digital Media. You can buy it here. It’s not available to buy in the US as yet.