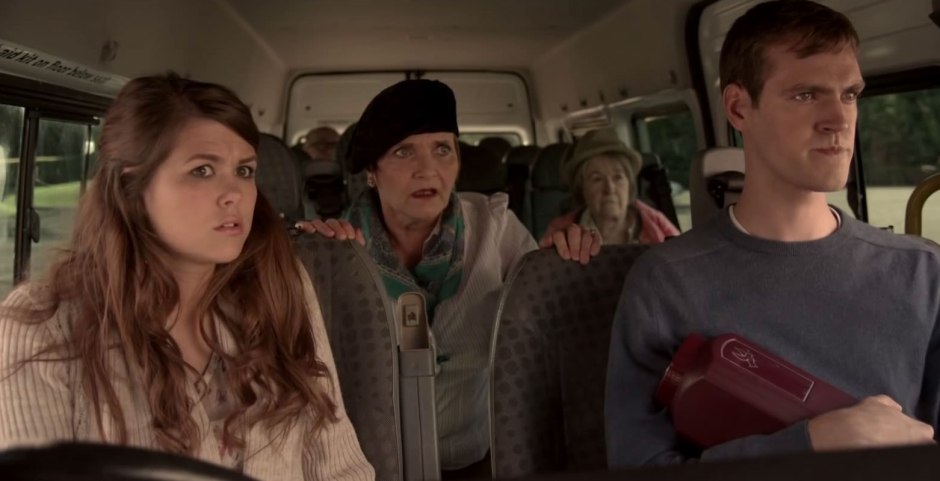 “My granddad had to move in here. I couldn’t leave him here. He’s my granddad.” (James, Where Do We Go From Here?)

Here’s a disclaimer: I’m friends with writer/director John McPhail, the man behind such lovely short films as Just Say Hi and V For Visa.

Here’s another: I’m one of the 264 people who contributed to the crowdfunding project for Where Do We Go From Here?, his first feature-length film.

And here’s a final one: disclaimers are shite.

You see, I feel the need to tell you the above so that some clever dick doesn’t come across this review, get suspicious and realise I have a connection with the film.

But it’s shite because, friendship and funding aside, I adore this wee film with all my heart.

You probably don’t believe me when I say that. And I get that. It’s understandable.

You’ll probably think I’m exaggerating when I say Where Do We Go From Here? has an opening five-minute sequence that will wrench your heart in a way that only Up has managed to achieve to this date.

You’ll no doubt think I’m fibbing when I tell you every single actor and actress is perfectly cast, not least of all leads Tyler Collins (Alaskan but with a surprisingly perfect Scottish accent ) as James and Lucy-Jane Quinlan (English and with an unsurprisingly perfect English one) as Jen.

You’ll undoubtedly sneer “aye right” as I gush about the heartwarming story in which James – who not only works at a care home but lives there because its elderly residents are his only friends – decides to take control of his life.

You’ll be certain I’m lying when I explain that James’s plan to bust out three of the old folk and, together with his crush Jen (who works at the home as a nurse), head off on a road trip to give them one more thrill, is a thing of beauty.

You’ll disregard my words as nonsense when I say the subsequent adventures they get up to lead to some hilarious moments, including a dangerous rumour at a 75th birthday party and the best use of a Speak & Spell since E.T.

You’d be forgiven for accusing me of nepotism when I insist John McPhail’s writing is spot on throughout, perfectly nailing the comedic glory that is Scottish patter while also finding just the right tragic words to give our heart a dead arm when we least expect it.

You’ll roll your eyes when I say Quinlan nails the role of Jen, especially early in the film when she’s expected to maintain our interest while still being coldly standoffish. She’s a success.

You’ll be convinced I’m spouting pish when I claim James’s three elderly chums – the compulsive liar Joan (Alison Peebles), the far-from-talkative Malcolm (Richard Addison) and the bloody lovely wee Nancy (Deirdre Murray) – are a delight, each given their own fair share of winning our hearts.

You’ll likely go on Twitter and call me a fraud when I praise Maryam Hamidi, who’s brilliant as the nasty care home manager Miss Thompson. Every time she chews the scenery you can tell she’s thoroughly enjoying every huge bite.

You’ll stroke your chin suspiciously when I declare the soundtrack – most of which was written and performed by lead actor Collins – a thing of beauty and something I really hope manages to find its way onto my iTunes somehow in the future.

You’d be perfectly within your rights to murmur “yer baws” when I say some of the shots of Scotland’s countryside are beautiful, and likely to have anyone seriously considering a trip up north.

And you’ll doubtless accuse me of talking out of my arse when I promise that this film will make you laugh, make you cry and make you crave popping candy.

But here’s the thing: if you do think all this, that’s your problem. If you decide I’m exaggerating when I say that this is one of the most charming, endearing, deflating and uplifting films I’ve seen in years – and certainly one of the best to come out of Scotland – then it’s your loss.

All I know is that as the credits rolled and I saw my name listed as one of those 264 crowdfunding contributors, I couldn’t have been prouder that it was attached to such a beautiful wee piece of work.

Where Do We Go From Here?’s rating earns it a place in the hallowed That Was A Bit Mental Hall Of Fame. Click here to see what else made the grade.

HOW CAN I SEE IT?
Where Do We Go From Here? is currently touring the festival circuit so it might be tricky for you to see it at the moment. Given its success so far though I’m confident it’ll get a distribution deal so when it does I’ll edit this review to let you know.