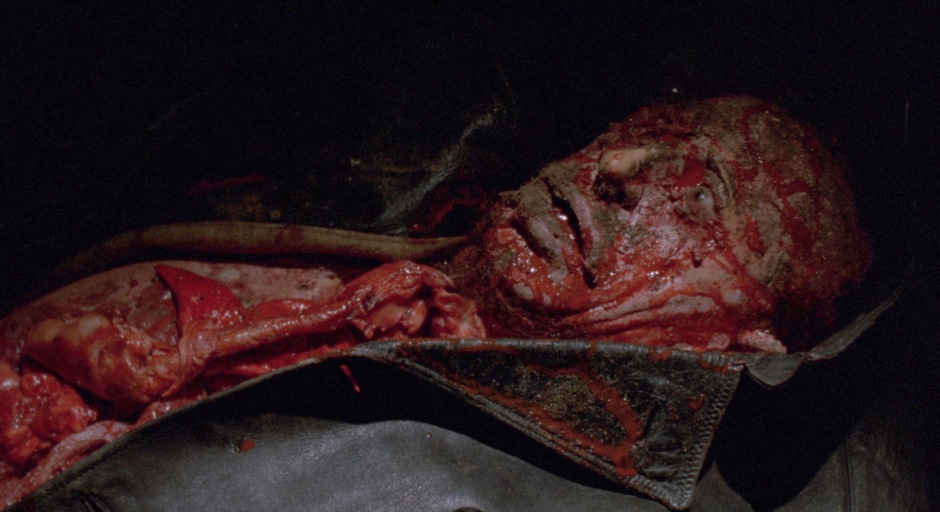 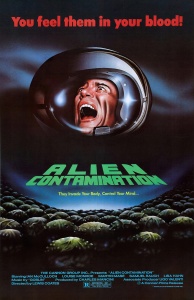 “Help! Let me out! There’s an egg!” (Stella, Contamination)

I’ve got a lot of time for Italian horror from the late ’70s and early ’80s. This was a fruitful period for low-budget horror, mostly thanks to the countless Italian rip-offs that were churned out in next to no time.

No film was safe from the Italian ‘homage’: when Jaws came out, a bunch of killer shark (and piranha and whale) films were released within a matter of months. Following Dawn Of The Dead, you couldn’t move in Italy for cheapo zombie flicks.

Meanwhile, Contamination – in case you couldn’t tell from the poster – was inspired by Ridley Scott’s Alien.

In fairness, it’s pretty different. Director Luigi Cozzi (who also wrote the screenplay under the pseudonym Lewis Coates: I see what you did there) sold Contamination to distributors with the original title Alien Arrives On Earth, though perhaps a more accurate name would have been Alien Eggs Arrive On Earth Then Explode A Bit.

Eventually the name was changed by producer Claudio Mancini, who had been working on a film called Contamination which was going to be a rip-off of Jane Fonda movie The China Syndrome. This other Contamination was scrapped, so Mancini decided Cozzi’s film would adopt the title, even though there’s no actual contamination in the film.

Set initially in New York, Contamination opens with a large ship drifting into the harbour with no crew on board. A group of cops is sent aboard to investigate, where they find various gruesome corpses and a load of crates which are said to be containing coffee, but are in fact holding a bunch of mysterious glowing green eggs.

It soon becomes clear what caused the crew to die: if you disrupt the eggs they explode, splattering anyone nearby with a toxic liquid. This liquid is so harmful to humans that seconds after they come in contact with it, their stomachs blast wide open in a massive explosion, blowing their guts all over the place.

One of the cops, a snarky sod called Tony, manages to escape the boat unharmed and finds himself detained by the military. There he’s questioned by Colonel Stella Holmes, who’s curious about these eggs of which he speaks.

Stella somehow comes to the conclusion that these eggs have come from Mars, and so sets about finding Commander Hubbard, one of two astronauts who previously went on a mission to explore the planet. Still with me? Good, because I might lose you soon.

After Hubbard is found, the three decide to fly to Colombia (where that non-existent coffee came from, you see), where they discover that the eggs are being distrubuted by the other astronaut, thought to be dead, who’s having his mind controlled by a massive alien cyclops intent on taking over the Earth. See, I told you it was different to Alien.

Contamination is mental, and I like it. The acting is fantastically woeful, the dubbing brilliantly bad (most low-budget Italian films of the era shot without sound and dubbed dialogue later in a studio to save money) and the gore effects delightfully over-the-top.

The number of exploding chests in this film surely has to approach double figures and each is so unnecessarily gory that, as shallow as it sounds, you never get bored of seeing it.

And then there’s the final act featuring the Cyclops, one of the worst (and therefore best) creatures I’ve seen in a film.

You see, Cozzi wanted to animate the creature with stop-motion but the studio shot down his plan and decided to make a big rubbish animatronic one instead. Despite Cozzi’s protests that this dopey-looking big prick could barely even move, budget won out over vision and the result will have you grinning like a goon.

It’s incredible to think that Contamination was once banned in the UK as one of the 72 films on the Video Nasties list, purely thanks to the numerous exploding chests. It says a lot about how society’s changed that these days the film is available uncut in Britain with a mere 15 certificate plonked on it.

Like so many films on That Was A Bit Mental, Contamination is best watched with a group of like-minded shit film fans. The pace drops pretty severely in the second act, so you may need chums to help get you through this lull and reach the brilliantly dumb Cyclops showdown. It’s worth it.

HOW CAN I SEE IT?
Contamination was released  on dual-format Blu-ray and DVD last month by Arrow Video, both in the UK and the US. As is typical for Arrow releases, the quality of the picture transfer is incredible, making the film look far better than it probably ever deserved to.