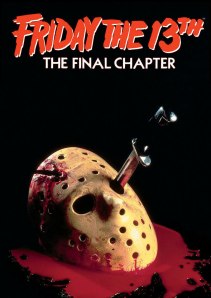 Oh, you poor, deluded fools. To think there was once a time when the fourth film in the Friday The 13th series was supposed to be the last one ever.

Of course, hindsight tells us this couldn’t have been further from the truth – Jason would go on to star in a further eight movies – but for now let’s treat The Final Chapter as the concluding part it was seemingly intended to be.

Following on from the end of the third movie, an apparently dead Jason is carted off to the local morgue where he rests with his victims. Predictably, it’s not long before he’s up and at them again, killing a couple of doctors on his way out of the building.

Jason sets off for Crystal Lake but he isn’t the only one headed there – and if you think I’m referring to anyone other than a group of sexually active teenagers then you really haven’t gotten the hang of how this franchise works yet.

Yes, another bunch of dick-swinging dudes and dudettes (including a young Crispin Glover) have rented a house at Crystal Lake, with the aim of partaking in all manner of alcohol consumption and numerous games of Hide The Sausage.

Watching on enviously is Trish Jarvis (Kimberly Beck), who lives in the house next door with her mum and brother Tommy (a pre-Goonies Corey Feldman). Trish wants to join the party but her mum’s having none of it, predicting with soothsayer-like accuracy that it’ll only lead to trouble.

Let’s not piss around any further – even if you haven’t seen the film before there are no prizes for guessing what the next 50 minute-chunk consists of (except for maybe a badge saying Captain Obvious). A grand total of twelve deaths are doled out by Jason in The Final Chapter, each clearly attempting to outdo each other in originality.

One poor sod has his neck sliced and broken with a surgical hacksaw. Another is thrown out a window, landing on the roof of a car three storeys down (and blowing out its windows in a spectacular and slightly unrealistic fashion). And, as ever, the token ‘impaled from below’ scene returns, this time with an unfortunate lass getting speared from underneath a raft.

As for poor Crisin Glover, he gets a corkscrew slammed into his hand then a meat cleaver lodged in his face. Thankfully, before this happens he manages to make his mark on cinematic history with one of the worst dances ever committed to celluloid. Observe.

The Final Chapter once again tinkers with the genre’s now-staple ‘final girl’ act by having two survivors. Both Trish and her little brother Tommy are the last ones standing by the end of the film, and while having two survivors ultimately didn’t work well in Part 2 this time it’s a lot more effective given that Tommy is so young and more vulnerable than his sister.

If you want to get all arsey and academic about it, The Final Chapter offers an interesting change in the perception of the female ‘heroine’ character. The films before it presented the idea of the final survivor being a teenage girl – a traditionally weak character (according to the movies, not me) – who realises she has to fight and finds inner strength to defeat what seems like an unstoppable foe.

This time another level in the hierarchy is added in young Tommy, and the film says: “You thought teenage girls were weak? Try a nine-year-old boy on for size”. Despite being the stereotypical ‘final girl’, then, Trish is no longer the most vulnerable character and as such her role in the final battle is merely to act as a decoy, having a half-arsed struggle with Jason while the real ‘final’ character, Tommy, prepares to confront the odds and delivers the final blow.

Either that or I’m reading too much into it and someone just really wanted to see Corey Feldman shave his hair off and swing a machete around (which does actually happen).

Which brings us neatly to the inevitable twist ending (spoilers for the rest of this paragraph!). Yes, despite the title claiming this was indeed the final chapter, the filmmakers still couldn’t resist ending on an “or is it?” note by suggesting that while Jason was indeed dead, young Corey Feldman had gone a little mad after killing him and could potentially go on to continue killing.

Thankfully, this odd ending wasn’t followed up on and the idea was scrapped by the time the inevitable Friday The 13th Part V: A New Beginning went into production. That’s not to say Part V didn’t introduce another new idea that would prove to be even more controversial… but that’s for another time.

Friday The 13th: The Final Chapter is a good entry in a series that had more or less nailed the slasher formula by the fourth film. The ending is the only truly unsatisfying aspect, the rest is standard slasher fare that should pass the time well enough with a group of mates.

HOW CAN I SEE IT?
Friday The 13th: The Final Chapter is available to buy on standalone DVD. Here’s the UK version and here’s the US version. Alternatively,

If you’re craving a more overall Friday The 13th experience you have three options. In the UK your only main option is this DVD box set, which contains DVD versions of Friday The 13th Parts 1-8.

This same DVD box set is also available in the US, though by far the best option is the recently released Friday The 13th: The Complete Collection Blu-ray set. This is only available in America but I can confirm it’s region-free (I bought it myself). it’s also currently the only way you can get The Final Chapter on Blu-ray.

Did you enjoy this review? There are 100 more just like it in That Was A Bit Mental: Volume 1, the first TWABM ebook. Get it today!