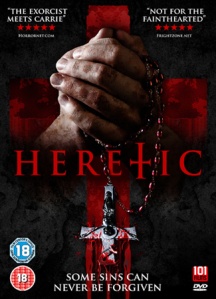 TOM – “Yes you can. You did when we asked for your help. I came to you, I confessed to you. And so did she. And what did you do? Three Hail Marys and a Go Fuck Yourself.”

I don’t think I could be a priest. One of the reasons for this is I haven’t been to a chapel in years (I’m fairly sure one of the requirements is you have to do that every now and then), but another is that I couldn’t be trusted to keep my parishioners’ confessions a secret.

“What’s that? You’ve been fiddlng the dog? Um, say a Hail Mary and… um, hang on… what? No, I’m just texting… someone. It’s unrelated, I promise.”

Father James Pallister has problems with confession too, but not for the same reasons I would. His problems begin when 15-year-old Claire confesses that she’s pregnant and he refuses to condone an abortion.

Visiting her house later that day, James finds Claire lying in the bath with her wrists slit. After she dies, James leaves the village and vows never to return.

Unlike most priestly vows though, James has to break this one when Claire’s stepdad also commits suicide (hmmm, wonder why he did that) and he agrees to come to the funeral.

Now an alcoholic, James doesn’t want to be around any of his friends in the village. Fellow priest Will keeps trying to get him to talk about the incident, a girl called Suzie keeps trying to chat him up and another, Melissa, is also pregnant and looking for both an abortion and James’s blessing. Leave the bloody guy alone, eh?

Walking home drunk one night, James sees the bloodied Claire standing at the entrance to her house. Following her inside, James finds himself locked in the house and unable to leave. Cue all sorts of spooky shit as the ghost of Claire and a mysterious man in black start putting the willies up him (not like that).

I tend to watch a film completely ‘cold’ if I can, with absolutely no knowledge of the plot or production. I’ll then read up on it after it’s finished. Usually when a horror film’s low-budget I can tell fairly easily.

It often looks too ‘clean’, the actors tend to be a bit pish and it’ll try one or two set-pieces which invariably fall on their arse. Heretic is so adept at avoiding these telltale signs that I was certain there had to be a relatively big budget behind it.

I was surprised and impressed, then, when I watched the film again with DVD commentary and discovered that the total budget from pre-production to release was just under £30,000. In Hollywood film budget terms, that would probably barely pay for someone to do Scarlett Johansson’s eyeliner.

I mention this incredibly low budget not to mock, but to applaud. Heretic is one hell of an achievement given the financial limitations placed on the crew, and one of the finest British horror films I’ve seen in a while.

For example, all the outfits in the film were bought in Primark (except the priest’s outfit: that was Asda Living), then sold on eBay after shooting had finished to earn back some money for post-production.

If you’re looking for a comparison, the ultimate low-budget film The Blair Witch Project apparently cost around $60,000 (£36,000) to make, after post-production.

Andrew Squires is an interesting lead actor. I’ll admit, at first I didn’t really take to him but that’s probably more because he reminds me of James Blunt than anything. Over time though his natural, realistic performance grows on you, especially later in the film when he gets to show off his personality a little more (though the less I say about that the better)

With a cover like the one you see above and promises of a ghost girl, the natural question you’ll probably have is how scary it is. The answer is the annoyingly non-committal “quite scary, but not really”. There’s a constant tension running through the film with long periods of silence keeping you on edge, waiting for the inevitable moments where shit goes down and a loud musical sting makes you jump.

Thankfully Heretic doesn’t resort to these tactics too much, except for one odd scene in which the screen goes completely black for a couple of beats before a loud scream and a pair of scary eyes force your heart up your lungs. For the most part the scares focus more on imagery, only using sound to build tension by making the background noise progressively louder rather than constantly going “boo” every couple of minutes.

In all, there are probably only three or four genuinely scary sections in the film, but that’s okay because Heretic isn’t trying to be The Exorcist (despite what the quote on the DVD cover tries to convince you). The focus isn’t on the creepy girl, it’s on the troubled priest, and the ‘horror’ isn’t so much the hauntings going on in the house as those going on in his mind.

Interspersed throughout the film are flashback scenes filling in more of the story and shedding more light on James’s dark secrets. Forget the scary bits, these are the most involving scenes in the film, paced perfectly to slowly reveal more plot information one nugget at a time and keeping you wondering what really happened to Claire and her stepdad all the way up to the final twist.

Heretic is an impressive British horror film. The quote on the DVD cover is exaggerating a tad by claiming it’s “a cross between The Exorcist and Carrie” – it’s not really in the same ballpark, other than the fact it’s got a priest in it and a girl with blood on her frock – but for a low-budget film that punches far above its financial weight it’s a fun ghost story that’s worth a watch.

HOW CAN I SEE IT?
Heretic was recently released on DVD and Blu-ray in the UK. I’d highly recommend picking it up if you’re a budding indie filmmaker because the commentary by director Peter Handford and producer Bethany Clift is one of the most informative ones I’ve listened to, giving countless tips on how to shoot films on a low budget. You can get the DVD here and get the Blu-ray here. Sorry Americans, it isn’t out in your neck of the woods yet.