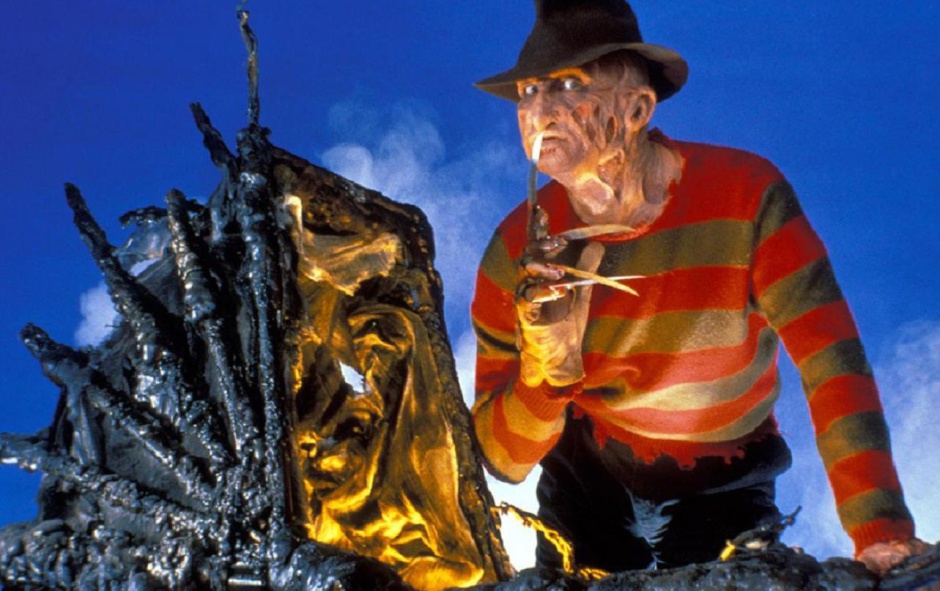 AMANDA KRUEGER – “Your birth was a curse on the whole of humanity. I will not allow it to happen again. You brought me back to give you life, but now I must take yours.”

I’ll tell you something, that Freddy Krueger lad doesn’t fuck around, does he?

Wes Craven’s original classic A Nightmare On Elm Street was released in 1984, yet by the time 1989 rolled around the series had already reached its fifth film.

Naturally, churning out movies at a rate of nearly one a year can’t be good for the quality of a franchise: not that New Line Cinema cared, of course. Freddy was guaranteed profit.

The process eventually reached a head with film number five, The Dream Child. It offered far more visual spectacle than any other entry before it but, crucially, made far less sense too.

Alice, the dull-as-a-5w-bulb survivor from the fourth film, is trying to get on with her life after ‘defeating’ Freddy a year earlier.

She’s started going out with Dan, her brother’s meathead pal who also survived Part 4, and all is well in her life. Hooray!

However, it turns out Dan’s a bit too handy with his giggle stick, as Alice soon finds out she’s pregnant. OH NO SHE’S DOOMED. Also, Freddy’s back and that.

You see, Alice has a new bunch of friends, each with their own vices. Greta is a supermodel-in-training who’s terrified of eating in case it affects her future career. Yvonne wants to get into the Olympics as a diver. And Mark is obsessed with reading and illustrating comics.

One by one, Freddy starts killing Alice’s chums in their dreams. And, as is the Freddy way, each of them dies in a way related to their obsession.

Cue Greta having her fear of eating used against her, as she’s force-fed until she dies. Yum! Meanwhile, Mark is sucked into a comic book world where he’s made of paper, and is shredded by a superhero version of Freddy.

And, in the only genuinely cool death in the film, motorbike-loving Dan is offed when Freddy actually turns him into a human motorbike (look, it makes sense when you see it) and forces him to crash into a truck.

How can all this be happening? Isn’t Freddy supposed to be dead? My beautiful brains, they’re crying in agony.

Well, remember when I told you Alice is pregnant? Turns out that since the foetus is in some sort of perpetual sleeping state, Freddy is able to enter its dreams at any point and reach Alice and her friends that way.

It’s novel, I’ll give them that. It’s also easily solved – abortion – but let’s not let a simple solution get in the way of a good complicated plot.

Things continue to get progressively odder. Alice’s friend Yvonne heads to the asylum where Freddy was born to try to free his mum’s soul (she was a nun raped by 1000 insane maniacs, you see), because side-plot.

Meanwhile, Amanda somehow enters some sort of upside-down MC Escher dream labyrinth, a bit like the one in… well, Labyrinth, where she has to fight with Freddy while protecting a five-year-old version of her unborn son. Look, I don’t know anymore.

I love the entire Nightmare On Elm Street series – I’ve stated this numerous times on this site in the past – but The Dream Child is just fucking silly.

The final 20 minutes is such a convoluted mess of ideas and bizarre random happenings that eventually you just have to turn your brain off and accept the madness into your head.

What’s that? The five-year-old turns Freddy into a Freddy foetus while Alice absorbs her kid’s energy again? Okay, whatever.

In fairness, The Dream Child does have one thing going for it: it looks fantastic. The ridiculous story makes for some genuinely impressive sets, especially the aforementioned labyrinth, and it’s easily the best-looking entry in the main series.

But it’s all just so confusing that unless you’re prepared to just sit slack-jawed in front of your screen while a parade of abstract ideas dances in front of you, you might be a little frustrated.

Incidentally, special mention has to go to the soundtrack, of which one track (Bring Your Daughter To The Slaughter by Bruce Dickinson) won a Razzie award for Worst Original Song and another (Let’s Go by Kool Moe Dee) was nominated.

If it’s a DVD boxset you’re after, the best one is the New Line Platinum Series set. This was released in the US in 1999 and is still in print, mainly because it’s a fantastic box set with loads of extras including a DVD game packed with loads of other interview snippets. The UK version has everything except the game and as such is still well worth the money.

It currently isn’t available as part of any major streaming service, but can be bought or rented on Blinkbox along with Parts 1-4 and the 2010 remake.