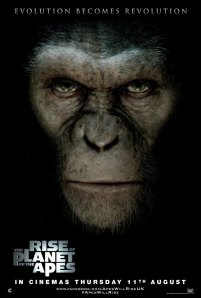 “Ape alone… weak. Apes together… strong.” (Caesar (in sign language), Rise Of The Planet Of The Apes)

It’s always dangerous messing around with the classics. When you take a film as well-loved as Planet Of The Apes and try to give it a modern twist, the results can piss off a lot of people – just ask Tim Burton. As a prequel rather than a remake Rise Of The Planet Of The Apes takes a different approach, albeit one that could still upset a lot of fans if it’s handled badly. Thankfully, they needn’t worry – it’s a fantastic movie that in no way sullies the name of its predecessor.

The film follows Will (Franco), a scientist working on a drug that he believes will cure Alzheimer’s disease by repairing the brain. After trying it on apes, Will finds that the drug does more than simply repair, it improves, making its recipient smarter than they were before they even had the disease.

When one of his test monkeys dies, leaving behind a baby, Will takes the baby home and discovers that its mother’s enhanced brain has passed down genetically to its son. Calling the ape Caesar, Will decides to keep him as a pet and monitor his progress over the years as he gets smarter, learning sign language and essentially acting like a young human boy.

To say any more would spoil a movie that you really need to discover for yourself, but that so much of the film is spent following Caesar’s development over the years is a telling sign that Rise Of The Planet Of The Apes is more emotional and intelligent than your typical summer blockbuster. You care for this ape, you’re upset for him when things are looking bad and, while we all know the ‘rise’ of the apes will ultimately result in the end of the human race as the dominant species, such is the power of this film that you almost sympathise with our so-called enemy.

If ever there was a man who could reignite the debate over actors winning awards for motion capture roles, that man is Andy Serkis. Having previously played such memorable motion capture characters as King Kong and Gollum, Caesar is his most impressive performance yet. Within ten minutes of Will taking Caesar home you forget you’re watching a CGI ape and start to completely believe it – an achievement very few CGI characters manage to accomplish. The scene later on where he reacts to the realisation that Will is leaving him for a while is heartbreaking, and his interactions with other simians later in the film are utterly believable.

It’s one scene in particular however that steals the show. I refuse to give it away (you’ll know it because it happens right after the obligatory “damn dirty ape” line), but it sent a chill up my spine I haven’t felt for years. There was such a sharp intake of breath among the audience I watched the film with that if there had been more people in attendance we might have been able to suck the screen off the wall.

I strongly recommend you see Rise Of The Planet Of The Apes. You don’t have to have seen the original film to ‘get’ it, it works perfectly well as a standalone movie. Of everything else I’ve seen this year, this one blows it away in terms of sheer emotion alone. And now, as is a fitting way to conclude a review of an incredible film, I end with a poor joke – you’d be (monkey) nuts to miss it. Sorry about that.