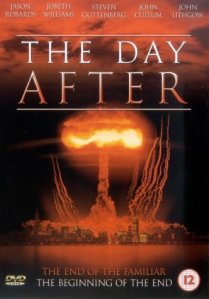 DR OAKES – “Do you have any idea what’s going on in this world?”
DR LANDOWSKA – “Yeah. Stupidity. It has a habit of getting its way.”

The threat of nuclear attack is something that has remained ever-present for the past 70 years. The technology may keep improving, and the potential enemy may keep changing, but whether it’s the Japanese, the North Koreans, the Americans, the Cubans, the Iraqis (ha!) or – in the case of The Day After – the Russians who are the would-be obliterators, much of the world lives its day-to-day life with the constant underlying knowledge that at any point another pissed-off country could press a button and that’d be that.

The Day After was an ambitious and brave TV movie that attempted to convince all who watched it that nuclear war shouldn’t be the ultimate answer (which sort of goes without saying, but some people are a bit daft). It shows the build-up, the result and the aftermath of a fictional nuclear attack on Kansas City. END_OF_DOCUMENT_TOKEN_TO_BE_REPLACED