“You have gone where it is forbidden and released the evil. You must confess.” (The Sentinel, The Basement)

The Basement was a cheapo Super 8 film shot over 22 days in 1989 and “abandoned almost as quickly,” its director of photography Michael Raso recalls.

Rather than putting together the finished film, writer/director Tim O’Rawe decided to move to LA instead, leaving all the shot footage with Raso with the simple message: “Good luck.”

The Basement sat (appropriately) in Ruso’s basement, garage and storage units until finally, in 2010, a small DVD publisher called Camp Motion Pictures decided to take the film, give it a new audio mix and re-edit and finally release it.

The result is a hilariously bad movie with easily some of the worst acting I’ve ever seen, and considering the utter shite I’ve watched over the years that’s saying something. END_OF_DOCUMENT_TOKEN_TO_BE_REPLACED 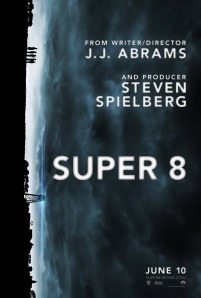 “Stop talking about production value, the Air Force is going to kill us.” (Cary, Super 8)

I’ve complained a few times on That Was A Bit Mental that they don’t make films like The Goonies or The Monster Squad any more – films where children act realistically, talk over each other, swear from time to time and are in genuine danger throughout their adventure. Super 8 is proof that, though rare, these films can still exist in modern cinema.

Set in 1979, Super 8 tells the story of a group of 13-year-olds who meet up on occasion to shoot a low-budget zombie film using their Super 8 movie camera. While filming a scene near a railway line they manage to catch film of a train speeding past them, colliding with a truck on the line and causing the mother of all train crashes. Running over to the truck they find their biology teacher behind the wheel, who cryptically tells them that they and their families are all going to die if they tell anyone what happened. Little do they know that the train contained a huge alien life form – one who’s now free, not too chuffed at the way it’s been treated, and well up for a shitstorm.

Put bluntly, this film is superb. The first half-hour is charming as you instantly fall in love with all the kids in the group (not in that way you maniac). Their dialogue is completely believable and you completely buy into the idea that they’re a bunch of close friends, in particular the main character Joe and his chunky chum Charles (the director of the kids’ film). The introduction of Alice (the wonderful Elle Fanning) makes things even more entertaining as you see this group of young teenage boys swooning over her but still trying to act cool. It’s all just so genuine.  END_OF_DOCUMENT_TOKEN_TO_BE_REPLACED