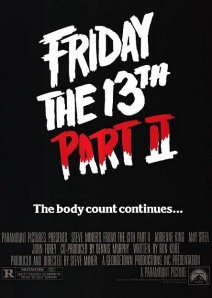 It’s common knowledge among horror fans that Jason isn’t actually the killer in Friday The 13th, and it’s in fact his mum who wanders around coating the forests of Camp Crystal Lake with teenage blood. Eager to cash in with a sequel but realising they couldn’t pull off the same trick twice (not to mention the fact that Mrs Voorhees was decapitated at the end of the first film), Paramount decided it was time to finally introduce Jason himself.

Thanks to the events of the first film, Camp Crystal Lake is still condemned and nobody’s allowed to go there. As luck would have it though, the training centre is located just a machete’s throw away from the Crystal Lake site. Hmmm, I hope nothing happens to anyone as a result of this.

After a fan-pleasing return from Crazy Ralph – who once again turns up to deliver an eerily prophetic warning and once again is dismissed – the would-be counsellors meet at the training centre and proceed to tell the obligatory campfire backstory of Jason and his mum.

What happens after this is essentially a re-do of the first film as one by one a total of eight victims are offed in various gruesome ways. One couple makes the slasher film mistake of having sex and the two are promptly impaled together mid-coitus as a result. A skinny dipping incident results in a machete-aided throat slice. Even poor old Crazy Ralph finally gets what’s coming to him.

By far the most memorable kill in Part 2 however is that of Mark, the unfortunate wheelchair-ridden lad who’s just about to get some female action for the first time. Heading out to the cabin’s porch to get some fresh air before the deed, Mark gets a machete plonked unceremoniously through his head before having his wheelchair kicked down the stairs, rolling him downhill and into the lake. Say what you will about Jason, but at least he’s an equal opportunities destroyer.

Speaking of Jason, Part 2 does indeed mark his first main appearance as the killer. He’s not quite the hockey mask wearing icon most know him as by this point, though (the mask doesn’t make its debut until Part 3).

Instead, in order to hide his disfigured face, Jason wears a slightly less menacing pillowcase over his head for the majority of the film. He’s still an intimidating figure thanks to the sheer bulk of the stuntman playing him (the fantastically named Warrington Gillette), but it’s certainly still the least terrifying portrayal of one of horror’s most famous (hidden) faces.

The main problem with Part 2 is its final third. After killing off eight people in quick succession the film leaves us with Jason, two survivors, and another 25 minutes or so left to go. The result is a lengthy chase scene that goes on a little too long for my liking, even though it’s interspersed with interesting moments (such as the heroine Ginny dressing up as Jason’s mother to try and confuse him).

The token twist ending is also nonsensical, in that it doesn’t actually tell us what the ending was (spoilers for the rest of this paragraph). Whereas the first film’s twist (the surviving girl, sitting in a canoe in the middle of Crystal Lake, is pulled under by a young Jason) is easily dismissed as a dream, this time it’s not so easy to do so.

After seemingly killing Jason, Ginny and her fellow survivor Paul head to another cabin. There, a maskless Jason bursts through a window and attacks Ginny, at which point we fade to white. The next thing we see is Ginny being helped into a stretcher, as she explains she has no recollection of what happened to Jason or Paul.

Call me entitled, but after watching a chase scene for 25 fucking minutes I expect to see what happens at the end of it, not just be told “we don’t know how it finished, sorry.”

In a way, Part 2 is a victim of the original’s success. Without knowing if they had a hit on their hands, the makers of the first film were able to make a movie that didn’t have to cater for the possibility of a sequel. They had a killer (Mrs Voorhees) who was killed fairly convincingly, and the twist ending with the little kiddy Jason coming out of the lake was little more than a Carrie-style dream ending to get the audience chatting as they left the cinema. It was a nice way to end a one-off film and had it not been so popular then it would have been a perfectly fine standalone story.

When the first Friday The 13th became an unexpected success and a sequel became necessary though, not only did the ‘proper’ Jason have to be created but his death had to be left ambiguous to prevent future complexities when making a third film, or a fourth, or (as eventually happened) a tenth. Hence the Part 2 ending in which Jason appears to create a final scare then just fucks off without any explanation as to where he went.

As the series progressed the filmmakers got used to the balance of giving us a satisfying Jason ‘death’ while still leaving the possibility of a follow-up in place. This effort lacks the former, making the latter feel jarring.

Friday The 13th Part 2 has a strong first half as far as ’80s slasher films go. The characters are relatively well-rounded and their personalities are distinct enough that they don’t just feel like generic bags of meat ready to be butchered in a variety of ways. The kills are also inventive enough given the genre was still in its infancy at this point, and the screen debut of Jason marks a classic milestone in horror cinema. The final 20 minutes are a bit of a slog though and the ending is just a piss-take, meaning while it may be iconic it’s by no means the finest of the Fridays.

HOW CAN I SEE IT?
Friday The 13th Part 2 is available on both DVD and Blu-ray. Here be links if you want to buy it – UK DVD

. If you’re craving a more overall Friday The 13th experience you have three options. In the UK your only main option is this DVD box set

, which contains DVD versions of Friday The 13th Parts 1-8.

This same DVD box set is also available in the US

, though by far the best option is the recently released Friday The 13th: The Complete Collection Blu-ray set

. This is only available in America but I can confirm it’s region-free (I bought it myself when I was in New York recently), so if you’re feeling particularly flash with the cash you can import it. This set contains all twelve movies in one box for the first time, including Freddy Vs Jason and the 2009 reboot.

Did you enjoy this review? There are 100 more just like it in That Was A Bit Mental: Volume 1

, the first TWABM ebook. Get it today!