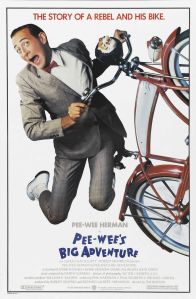 Though he was something of a household name in America during the 1980s, Pee-wee Herman was never really that famous in the UK. This is no doubt because his much-loved children’s show Pee-wee’s Playhouse was never given the national exposure as it was in the States, instead relegated to an early-morning spot on then-obscure satellite channel Nickelodeon in the early days of Sky. The Americans loved him though, and that’s why he was popular enough to spawn two films (this and Big Top Pee-wee) with a brand new third one on the way courtesy of Judd Apatow.

Pee-wee’s Big Adventure tells the story of man-child Pee-wee Herman (Paul Reubens) and his quest to find his missing bike. Pee-wee is obsessed with gadgets and gizmos, and his house is littered with all manner of weird and wonderful inventions, but it’s his special red bike that he holds dearest to his heart, much to the annoyance of his rich neighbour Francis. After heading into town and popping into a local joke shop Pee-wee returns to discover his bike has been stolen. Heartbroken, he vows to find out who’s responsible and bring them to justice.

If you’re new to Pee-wee Herman, the character may at first seem a little odd. From his squeaky voice to his bizarre array of laughs, you’d be forgiven for feeling a little confused as you watch him brush his teeth with an oversized toothbrush then completely cover his face with sticky tape. His childish sense of humour soon grows on you though, and by the time he’s cracking schoolboy-level “I know you are but what am I” jokes you’re guiltily chuckling away with him.

The film is essentially a series of set-pieces as Pee-wee finds himself travelling across America to find his bike in Texas (after being told it’s in the basement of the Alamo by a hack psychic). One minute he’s hitching a ride with a murderer fugitive on the run, the next he’s watching the sunset inside a giant dinosaur with a waitress while her huge fiancé waits angrily outside, the next he’s performing a dance number in a bar full of Hell’s Angels in an attempt to win them over and avoid a kicking.

As Tim Burton’s directorial debut Pee-wee’s Big Adventure is missing much of the dark and gothic imagery that his later work would become synonymous with, but there are still the odd scenes that are clearly Burtonesque. The sequence in which Pee-wee dreams of his bike being stolen by a bunch of evil clowns and then dunked in a pool of lava by a massive robot is one such example of future Burton shining through.

The film’s final twenty minutes are brilliant slapstick humour as Pee-wee finds himself being chased by guards through Warner Bros Studios and causing trouble in all sorts of movie sets and film shoots. It’s a brilliant, hilarious final act that gives the impression that the film’s just thought “fuck it, let’s go mental”.

Despite its age and its deliberately childish sense of humour, Pee-wee’s Big Adventure is a hilarious film that still manages to hold its own. As the first ever Burton-Elfman collaboration it’s worth seeing for that alone, but even if you couldn’t care less about that this is a treat. Perhaps if more people in the UK had seen Pee-wee’s Big Adventure or his TV show then his character would have been more successful in the UK, but as it is, it’s merely a cult favourite on these shores and one you should certainly check out if you fancy a laugh.

WHERE CAN I SEE IT?
Criminally, Pee-wee’s Big Adventure has never been released on either DVD or Blu-ray in the UK. You can always try importing the Region 1 DVD

or the Region A Blu-Ray

from Amazon but you’ll need a region-free player to watch them. It also can’t be found on either Netflix or LOVEFiLM. A tricky one to find, then, but worth the hunt. You can watch it on YouTube Video On Demand for £2.49, mind.