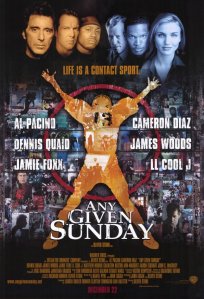 “Life’s a game of inches, so is football. Because in either game, life or football, the margin for error is so small. I mean, one half a step too late or too early and you don’t quite make it. One half-second too slow, too fast and you don’t quite catch it. The inches we need are everywhere around us. They’re in every break of the game, every minute, every second. On this team we fight for that inch. On this team we tear ourselves and everyone else around us to pieces for that inch. We claw with our fingernails for that inch. Because we know when add up all those inches, that’s gonna make the fuckin’ difference between winning and losing.” (Tony D’Amato, Any Given Sunday)

Pacino plays Tony D’Amato, an aging coach who’s trying to lead his team, the Miami Sharks, to glory one last time. Standing in his way are Christina Pagniacci (Diaz), the daughter of the team’s late owner (and Tony’s friend) who doesn’t believe in tradition and wants to move the team to another city, and the team’s doctor (Woods), who’s been giving players illegal injections to keep them playing, despite the risks to their health.

Tony’s players have their own issues, too. His quarterback (Quaid) is also feeling the pangs of old age and fears his career is coming to an end, his wide receiver (LL Cool J) is annoyed he’s not being thrown the ball enough and believes it could affect his sponsorship contracts, and the rock in his defence (played by real-life American footballer Lawrence Taylor) has injured his neck and is one bad tackle away from permanent paralysis at best, death at worst.

And then there’s Willie Beamen (Foxx), a cocky young third-string upstart who comes into the team after two shock injuries and decides he doesn’t want to be a team player. He starts running different plays to the ones Tony picks and while the Sharks start to win games and the fans love Beamen, his teammates begin to resent him. As you’d imagine, the whole situation is one big time bomb waiting to go off.

It’s a testament to Oliver Stone’s abilities that while Any Given Sunday clocks in at a hefty 150 minutes none of it feels like filler. Whether it’s in-fighting between players, tense arguments between Tony and Christina, the behind-closed-doors conflicts we’re shown with some of the players and their families or any of Pacino’s numerous lengthy and motivational speeches, every scene is captivating.

Best of all though is the game sequences. You will never see any sport filmed in such a dramatic, impressive way as Stone uses slow motion, close-ups, point-of-view shots, montages and music to perfection during sequences that can often be long (up to 15 or 20 minutes at times) yet still never feel long enough. Sometimes he’ll raise the bar even further and show something out of the ordinary, like a game taking place in torrential rain (it might sound like I’m taking the piss but it’s genuinely some of the best cinematic rain ever, up there with Road To Perdition and Breakfast At Tiffany’s) or a shocking injury (detatched eyeball, anyone?). These game sequences are clearly the highlight of the film and are breathtaking.

It’s rare that you get a film where every single actor is at the top of their game but that’s what you get here. Pacino is enthralling to watch, Foxx is likeable and hateable all at once, Diaz comes across as the complete bitch she’s supposed to be and the rest of the team are completely believable.

It even has you questioning certain values throughout, particularly when Foxx calls Pacino out on an “inspirational” speech he gave to him earlier in the film, about how he had to block out the crowd and imagine he was back at home, playing with his friends in the ghettos. At the time it simply seems like Pacino is trying to connect with him and we don’t give it much thought, but when Foxx brings it up and accuses Pacino of being patronising you can’t help but agree with him. Even decent people have flaws, it seems.

Naturally, if you understand the rules of American football you’re going to get the most out of Any Given Sunday because the game scenes will make a lot more sense and without understanding what’s going on the tension will be lost on you at times. Even if that’s the case however you should still give this a go because it’s still an incredible character study and remains one of my favourite sports films more than a decade after I first saw it. If you’ve never seen it (or even heard of it), check out the trailer below to see how amazing it looks.

WHERE CAN I SEE IT?
You can get Any Given Sunday on DVD here or on Blu-ray here. Both versions claim to be the “Director’s Cut” but in reality the theatrical version (which has never been released on DVD) was five minutes longer.