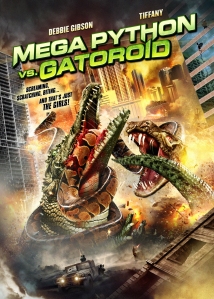 “The pythons aren’t at the top of the food chain. I am. And I say we’re gonna take care of this problem, right now.” (Terry, Mega Python Vs Gatoroid)

Okay, enough is enough. A message to all low-budget filmmakers – it’s now time to stop using cheap CGI companies to make your special effects. These SyFy-financed creature feature films (see also Dinoshark and and Sharktopus) have been coming thick and fast for a couple of years now and the effects are somehow managing to get worse. In the latest of these 90-minute brainfarts Mega Python Vs Gatoroid, there are moments where CGI is used seemingly for the sake of it, even though real-life props would have been cheaper and more realistic.

Anyway, we’ll come back to that in a bit. Mega Python Vs Gatoroid stars ’80s music starlets Tiffany and Debbie Gibson in a movie that actually has them fighting more than the titular superbeasts. It’s set in the Florida Everglades, where a surprising number of alligators have been turning up dead. It soon emerges that the reason for this is some mutated giant pythons that were freed from a research lab, released into the wild and began to lay eggs.

Terry O’Hara (Tiffany), the local ranger, gives the go-ahead to legalise python hunting in the area while activist Dr Nikki Riley (Gibson), who freed the pythons in the first place, campaigns to stop people killing the animals. Eventually the pythons start getting so big that Terry decides to make the controversial decision to inject some dead chickens with steroids then chuck them in the river so the alligators will eat them and grow. And you thought “Gatoroid” would be a half-alligator, half-hemmorhoid.

Naturally, there’s a lot to be said for a film that lets you finally tell people “yes, I watched a movie with a scene in which that woman who used to sing I Think We’re Alone Now injects uncooked chickens with steroids”, or even “have you ever seen a film where Mickey Dolenz from the Monkees is stepped on and crushed by a 30-foot alligator? I have”, but I can understand why that may not be enough for some people. Thankfully there are also a few sub-plots dotted around to keep things varied.

Most entertaining are the trio of hunters led by Robert Shafer (better known as Bob Vance of Vance Refridgerations from the US version of The Office), who wander round the forests with their shotguns while giving their best redneck “yeehaw” impressions. Then there’s Dr Diego Ortiz (Martinez), who spends most of the film telling an uninterested Tiffany that they need to destroy all the six-foot alligator eggs in caves around the area. And of course the rivalry with Tiffany and Gibson continues to simmer throughout the film, until it comes to a head with a ridiculous catfight that many 30-year-olds would have killed to see in the ’80s when they were rival popstars.

So what’s not to like? The “special” effects, that’s what (oh, they’re special alright). I make no exaggeration when I say the CGI – in particular the giant pythons – are so badly rendered that it genuinely looks like something out of a video game on a high-end PC. It’d be acceptable for gaming, sure, but in a movie alongside real life actors? It looks atrocious.

As previously explained, it’s worse when the CGI is used as a replacement when props would have worked better. I can just about understand using the CGI for the snakes and alligators while they’re alive, but when a large python is dead and you’ve got an actor lying underneath it you should really be using a big rubber prop. It’s cheaper and when the actor interacts with it (he struggles to try to get out from under it) it looks realistic because, well, it is. It’s a physical object.

Instead, here you have a man who was filmed struggling with nothing on him at all and then had a cheap-as-fuck CGI snake placed over him, sloppily animated to look like it’s moving as he does. There’s even some horrible glitching at times, where his hand goes through the snake when he moves. Just get a rubber one, seriously.

This continues throughout the film. When a snake attacks a dog near the start it looks like something out of Tekken. The climactic scene looks like it should have a “Player 2 press Start to join in” message at the top-right of the screen. And there are so many bad bluescreen scenes that they might as well have filmed the whole thing against someone’s bedroom wall and superimposed the actors over old episodes of The Crocodile Hunter.

In terms of general entertainment Mega Python Vs Gatoroid is one of the better SyFy-funded movies out there, though that’s not saying much. The atrocious video game-quality CGI is some of the worst I’ve seen, however, to the extent that it takes away from the otherwise cheesy fun on offer (watch the trailer below and you’ll see what I mean). Just stick Tiffany’s album on Spotify and play Tomb Raider instead.

WHERE CAN I GET IT?
If you live in the UK, Mega Python Vs Gatoroid currently isn’t on DVD or Blu-ray but it’s on SyFy and SyFy HD a hell of a lot at the time of writing. If you live in the US and want your own copy on a shiny disc you can get the Blu-ray by clicking here

and get the DVD by clicking here