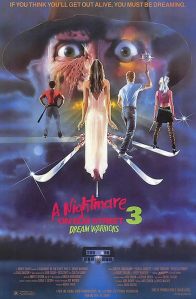 “Let’s go kick the motherfucker’s ass all over dreamland.” (Kincaid, A Nightmare On Elm Street 3)

After New Line Cinema ballsed up the sequel to its biggest-grossing hit with an unintentionally homo-erotic film that tore apart the mythology the original took great pains to create, it was decided that the third Nightmare movie would right the wrongs of Freddy’s Revenge and provide the true sequel Freddy fans wanted the first time around.

Back came Wes Craven, then, who had been shunned for the second film. Craven wrote a first draft of the script then moved on to a different project, but not before also convincing Heather Langenkamp, who played Nancy in the original film, to return. The combination of Craven’s story and Nancy’s return laid the groundwork for what would ultimately prove to be the best of the Nightmare On Elm Street sequels.

With Elm Street exhausted of teenagers, Dream Warriors moves its setting to a psychiatric hospital where a fresh batch of potential teenage victims are housed. While each of these teens is in the nuthouse for their own personal reasons – one doesn’t talk, one self-harms, another is a drug addict – they also share a common problem: they’re all being stalked in their sleep by Freddy Krueger.

Naturally, the staff aren’t having any of it, and the kids are getting annoyed that their pleas are going unnoticed – that is, until Nancy joins the hospital as a group therapist.

After finding out what they’re all going through, Nancy explains to the teens that they’re the last of the Elm Street children – the kids of the parents that burned Freddy alive – and that he wants to kill them so he can finally get his revenge once and for all. Nancy teaches the group that they’re in control of their own dreams, and that as long as they keep that control they can give themselves any special powers they want to help them defeat Freddy. And so they set about preparing to take on Freddy in the dream world.

The reason Dream Warriors is the best of the Nightmare sequels is because it marks the final high point of the series just before Freddy’s popularity exploded and the Nightmare movies descended into self-parody and MTV jokes. This is the first film where Freddy starts wisecracking as he offs his victims but the actual plot is still somewhat serious – the backstory telling how his mother, a nun at an asylum, conceived him after she was accidentally locked in a room with a hundred maniac inmates and raped over and over verges on the obscene – and ensures the film remains a firm member of the horror genre as opposed to the black comedies its sequels essentially were.

The deaths are also among the most varied and memorable in Nightmare lore. One telly-addicted victim pegs it when her TV sprouts a Freddy head and arms, picks her up and slams her head into the screen, while another nearly meets her end at the hands (well, gums) of a giant Freddy snake which looks not unlike a huge penis. Not that I noticed, I’m just saying.

By far the most talked-about scene in the film however is the puppet suicide. One of the patients builds puppets as a hobby and so Freddy uses this against him by ripping his veins out of his wrists and feet and turning him into a giant puppet, using the veins as strings and operating him from above. To everyone else it looks like he’s just sleepwalking, but in his dream Freddy is in control, leading him to the top floor and chucking him out the window in what appears in the real world to be a suicide.

Even the film’s ending is effective, as some characters you expect to live don’t make it and Freddy’s demise actually makes some sense given his religious bloodline. It’s an appropriate end, and had the series finished there it would have been a fitting way to draw a line under things and atone for the poor second film. Of course, it didn’t quite happen like that, but that’s for another time.

If you want to watch only the best films in the Nightmare On Elm Street series then watch the first, skip the second and definitely check out Dream Warriors. It’s second only to the original movie in terms of plot and creativity while also presenting a Freddy that, while more charismatic, is still somewhat scary. In short, it was the last truly fantastic film in the main Nightmare On Elm Street series.

Usually I end my reviews with the film’s trailer but the Nightmare On Elm Street 3 one was only a sort of teaser trailer, effective though it may be:

So to give a better idea of the movie I found this fan-made trailer which is actually really well-made and gives a fantastic sense of what the film’s all about. I really recommend it because it goes some way to explaining why I love this film so much. Enjoy!