What’s the oddest thing you’ve ever found in a sewer? What’s that? You don’t do raking around in sewers? Oh. Right. Um, me neither.

But if I did, chances are I probably wouldn’t come across odd little mutant baby things. That’s what one sewage treatment worker finds at the start of Hideous!, another low-budget grotfest from indie horror studio Full Moon.

The man hands over said mutation to Belinda Yost, a woman who specialises in selling mutations to collectors. Which is one hell of a niche market, but let’s go with it for the sake of the film. END_OF_DOCUMENT_TOKEN_TO_BE_REPLACED

“You’re history, you little pervert! No, you’re archaeology, as in old garbage!” (Anna, The Creeps)

Full Moon Pictures is one of my favourite B-movie horror studios. Established in the 1980s, it was well-known among horror fans for its cheesy low-budget efforts.

Some, like Puppet Master and Subspecies, were so popular they went on to spawn their own multi-sequel franchises. Others, like Dollman – in which an intergalactic bounty hunter crashlands on space only to realise he’s ten inches tall – weren’t.

Full Moon continues to this day, and while most of its recent output retains all of the cheese, it leaves out most of the charm. Titles like The Gingerdead Man and Dangerous Worry Dolls sound like they should be superb slices of low-budget larks (well, they do to me at least) but ultimately they end up in the TWABM Hall Of Shame.

A great example of how it used to be is The Creeps, a Full Moon pishfest that was given a DVD re-release this week. END_OF_DOCUMENT_TOKEN_TO_BE_REPLACED 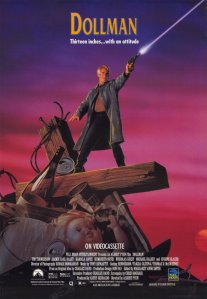 OVERWEIGHT KID – “That’s a Kruger blaster! The most powerful handgun in the universe!”

While Full Moon Features is still going these days, it’s probably fair to say that most of the stuff it puts money into is utter shite. The likes of Dangerous Worry Dolls, Gingerdead Man and Killjoy, while entertaining to those who get a kick out of watching bad movies, just can’t cut it overall. This wasn’t always the case though – back in the late 80s and early 90s Full Moon Productions (as it was known then) was a powerhouse in the world of low-budget, straight-to-video sci-fi and horror. Film series like Puppet Master, Subspecies and Trancers were much-loved by genre fans at the time, and the Videozone making-of features at the end of each tape (long before DVD, mind) helped gain Full Moon a cult following of fans. Dollman was one of the films Full Moon released during that time period, and it’s easily one of the silliest.

Dollman opens on a planet many light years away with its hero Brick Bardo coming face-to-face with his nemesis, the criminal Sprug. On this planet if you commit a misdemeanour and are caught you have a body part removed as punishment, so when you consider Sprug is just a head on a floating platform, it’s obvious he’s a nasty bugger. Still, that doesn’t stop him jumping (well, rolling) into his spaceship and trying to leave the planet, with Brick following in hot pursuit. The two ships crash-land on Earth (the Bronx, to be precise), so Brick has to find a way to repair his ship and get back to his own planet before Sprug finds him. There’s just one thing – on Earth, Brick is only thirteen inches tall.  END_OF_DOCUMENT_TOKEN_TO_BE_REPLACED