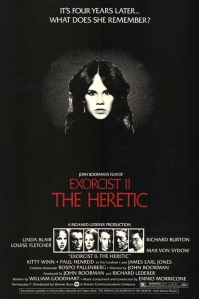 I’ve said plenty of times before that The Exorcist (and its subsequent Director’s Cut) is one of the greatest movies ever made. It’s terrifying, it’s spectacular, it’s faith-challenging and it’s supremely acted. In a way then Exorcist II: The Heretic is even more impressive, because it takes one of the finest films ever and follows it up with a sequel so brain-achingly bad it’s without doubt the biggest drop in quality in film sequel history.

Set four years after the events in Georgetown, 18-year-old Regan MacNeil (Linda Blair again) is now living in New York with her mum’s friend Sharon (Kitty Winn, also returning from the first film) while her mum is off making another movie. Regan claims she doesn’t remember any of the events of the first film, but she’s being monitored by a psychiatrist anyway. The psychiatrist, Dr Tuskin (Louise Fletcher) reckons Regan’s suppressing those memories and she wants to try hypnosis to free them.

Meanwhile, a priest called Father Lamont has been assigned by the Church to investigate the death of Father Merrin at the end of the first film, so he visits Regan to try to get answers. So far, so normal. But this is still only the first ten minutes or so. Then it gets bad.

It’s said that when Exorcist II had its premiere, the audience were fine with it until the “synchroniser” was introduced. At this point the audience burst into hysterical laughter and the film could never win back their respect. It’s little wonder why – it’s the exact moment all the accolades and reputation earned by The Exorcist are flushed down the toilet and the series turns into hokey sci-fi mumbo jumbo. END_OF_DOCUMENT_TOKEN_TO_BE_REPLACED

Of course, even if it hadn’t been admitted that much of Faces Of Death was fake, these days it’d be much easier to tell anyway. The film originally gained notoriety and popularity in the early days of VHS, where people would rent and copy the taboo tape, passing it around their friends and constantly degrading the already fuzzy picture quality in the process. This made it easier to believe all the footage was real, because the detail lost in the tape quality would be filled in by the viewer’s subconscious and made “realistic” in their heads.  END_OF_DOCUMENT_TOKEN_TO_BE_REPLACED 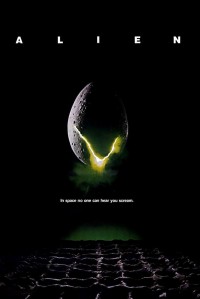 “We’ll move in pairs. We’ll go step by step and cut off every bulkhead and every vent until we have it cornered. And then we’ll blow it the fuck out into space. Is that acceptable to you?” (Ripley, Alien)

It speaks volumes of Alien‘s masterful construction that 33 years after its initial release it’s still one of the most effective sci-fi/horror hybrids ever made. While many sci-fi films of its era look dated beyond belief these days, Alien‘s unique style and pacing ensure it still holds its own (and usually comes out on top) among today’s similar offerings.

It tells the story of the Nostromo, a mining ship that intercepts a strange SOS signal from a nearby planet. Waking from hypersleep, the crew of the Nostromo land on the planet to investigate. There they find a deadly parasite that infects a crew member and uses his body as a host to infiltrate the ship, at which point it begins systematically killing the rest of the crew.

The key to Alien’s scare factor is Ridley Scott’s clever use of the “Jaws technique” – by showing as little of the monster as possible, Scott has the viewer filling in the blanks themselves, adding what personally scares them and making something much worse than could ever possibly be shown on-screen.

When the Alien is eventually revealed however, it’s to the credit of Swiss surrealist artist HR Giger that his creation is still terrifying in full view. Its long head and extending teeth are as close to a killer penis as you can get, and as the crew members are offed one by one and the film’s heroine is slowly revealed to be Ripley, you can almost hear the amateur psychologists in the audience feverishly scribbling down “inherent fear of penetration” in their mental notebooks.  END_OF_DOCUMENT_TOKEN_TO_BE_REPLACED

“You know Macumba? Voodoo. My granddad was a priest in Trinidad. He used to tell us: “When there’s no more room in hell, the dead will walk the earth.” (Peter, Dawn Of The Dead)

While once-legendary horror director George A Romero has let his talents go a little wayward recently, the man will always be best known for his Dead trilogy. No film series has inspired more amateur horror filmmakers than Night Of The Living Dead, Dawn Of The Dead and Day Of The Dead. They were the first contemporary zombie movies, the films that wrote the rulebook and laid the foundations on which countless zombie movies, comics and video games in the decades since have built upon. While Night Of The Living Dead was the film that started it all off and created the modern zombie as we know it, its sequel Dawn Of The Dead is the film that many argue is the best of the trilogy. I’m inclined to agree.

Taking place a short while after the events of Night Of The Living Dead, the original spate of reports of the dead coming to life has now escalated into a full-blown epidemic in which zombies roam the streets and buildings of Philadelphia. Two workers at a TV station realise things are starting to get out of hand and, as they try to escape a building being overrun by zombies and SWAT team members, they meet two soldiers who also think it’s time to bail. They head to the roof, “borrow” the TV station’s helicopter and go in search of a place where the locals are decidedly less bitey.  END_OF_DOCUMENT_TOKEN_TO_BE_REPLACED