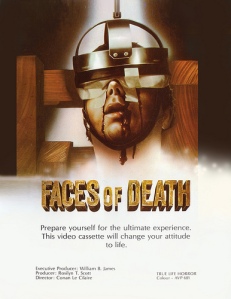 Of course, even if it hadn’t been admitted that much of Faces Of Death was fake, these days it’d be much easier to tell anyway. The film originally gained notoriety and popularity in the early days of VHS, where people would rent and copy the taboo tape, passing it around their friends and constantly degrading the already fuzzy picture quality in the process. This made it easier to believe all the footage was real, because the detail lost in the tape quality would be filled in by the viewer’s subconscious and made “realistic” in their heads.

Nowadays, with the film available on DVD (in some countries at least), it’s much clearer to tell which of the footage is genuine and which is scripted, hokey bullshit. Many of the film’s more famous scenes – the murderer on Death Row getting the electric chair, the orgiastic cult who eats each other’s organs, the game warden who’s eaten alive by an alligator, the rescuers recovering the mangled corpse of  a man who’s fallen down a cliff, the bear attack, the man setting himself on fire, the restaurant where a live monkey has its head caved in and its brains scooped out – are exposed as quite obviously fake with the benefit of added clarity.

However, it also makes the real stuff much easier to see, and it’s this stuff that’s truly hard to stomach and makes Faces Of Death one to skip. The first half an hour is easily the worst, opening with footage of actual open heart surgery and continuing on to plenty of graphic footage of animals being killed. We see an illegal dog fight taking place, followed by a dying lion bleeding to death. We see an African tribe cutting open a cow and draining its blood into a pot. We see a chicken being beheaded, then we see slaughterhouse workers cutting cows’ throats open in kosher killings. We also see seals and alligators being clubbed and skinned.

Other real (stock) footage is harrowing to watch – a section on the Nazis shows lots of Holocaust footage, with emaciated bodies being carted around and dumped in graves, while newsreel footage of cholera victims in India, suicides, dogs with cancer and police gathering the brains and various other remains of road accident victims and San Diego plane crash corpses produce a continuous stream of shocking imagery.

Faces Of Death can try to chuck its moral messages around all it wants, but it’s clear they’ve simply been shoehorned in there to justify showing the footage. The simple fact is that regardless of how much of it is fake, the fact that much of it is real footage of humans and animals being killed means this is a film that truly lives up to the video nasty name, and one of the very few nasties that I believe should be banned in its uncut form in the UK. We may live in a time now where graphic death footage can be found online by those who really want to see it, but the act of putting some of it in a film, adding fake scenes to boost its running time and making money off it leaves a bad taste in my mouth. Avoid.

WHERE CAN I SEE IT?
Despite its shocking real-life content, Faces Of Death is available to buy in a near-uncut state in the UK.  The only shots missing are the dog fight scene and the start of the restaurant scene where the customers bash a monkey’s head in (since the brains are fake the actual bits where the brains are eaten are still in there). If you’re really morbidly curious and you have to see it, you can get that cut DVD here or import the uncut German DVD (which was the version I watched) here. If I were you though, I’d just watch the below clip from the excellent Video Nasties: The Definitive Guide DVD documentary instead.

If you enjoyed this review and would like to read more, here’s a complete list of reviews on That Was A Bit Mental complete with brief descriptions. Thankfully, very few of them involve eating monkey brains.