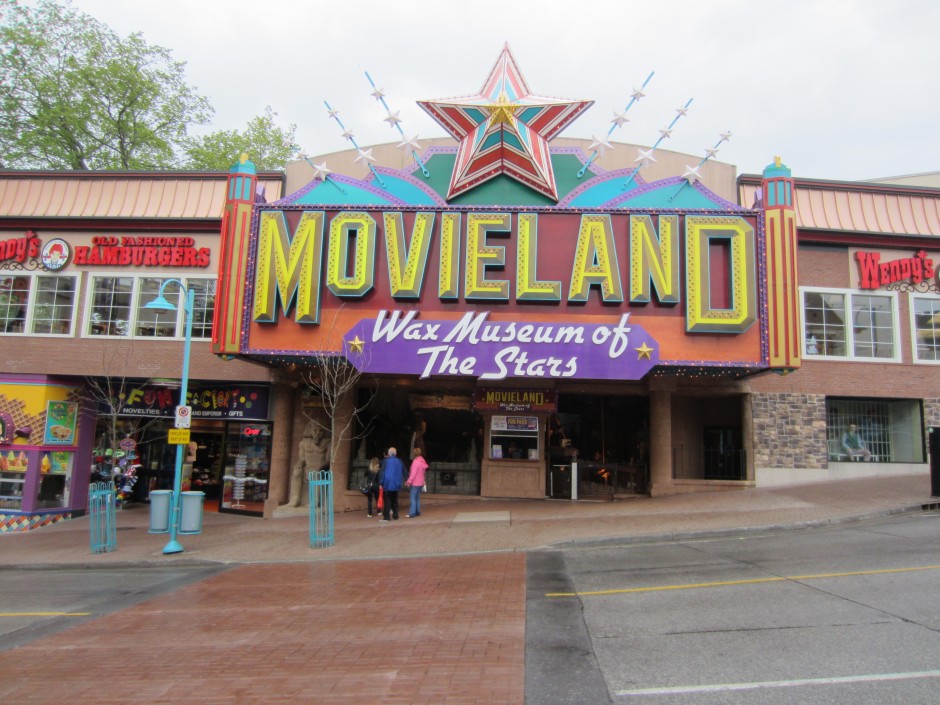 I love shit places. This should already be clear to you if you read about my previous trip to Popeye Village in Malta. So when I travelled to Canada in 2013 to visit my then-fiancée’s family and was told of the cheesiness that could be found at Niagara Falls, a trip to said Falls was arranged post-haste.

Let’s get the obvious stuff out the way first – Niagara Falls is amazing to see. Check this shit out (click the pics to embiggen): 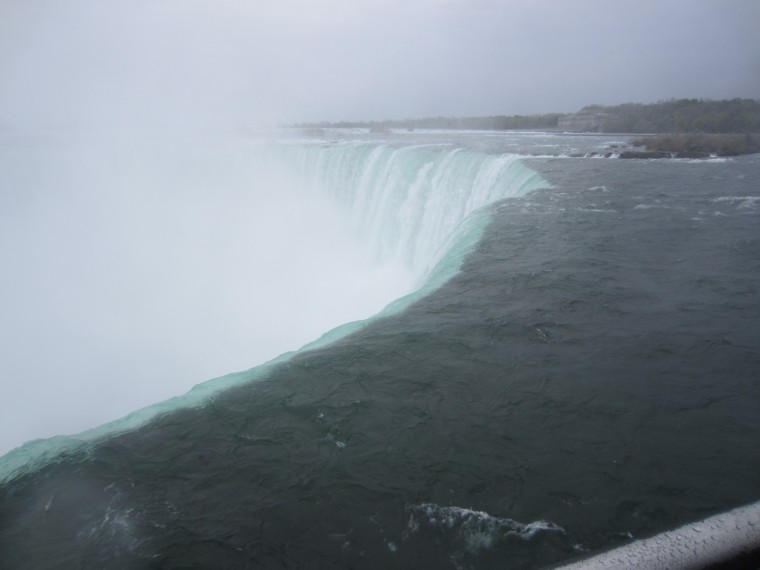 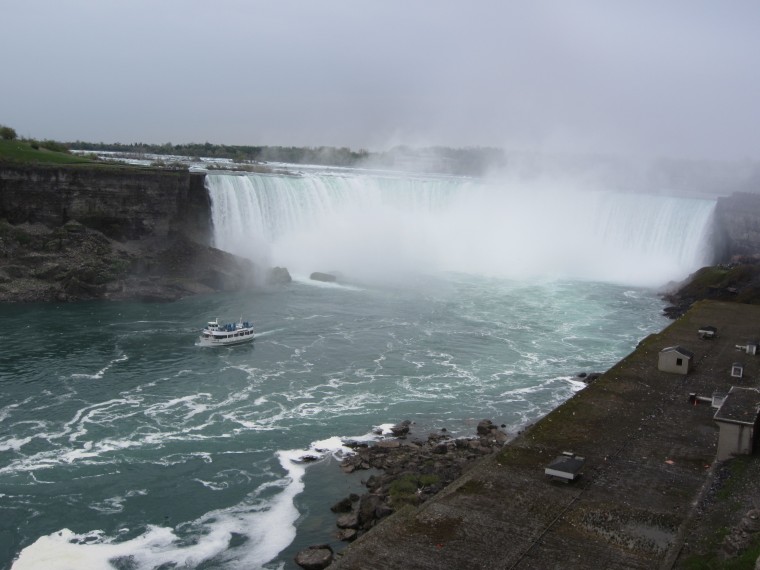 If I’m being honest though, as impressive as that was, it was something else that I fell in love with at Niagara. On the way to the falls I saw a novelty street filled with loads of cheesy shops and attractions, including Movieland: Wax Museum Of The Stars™. 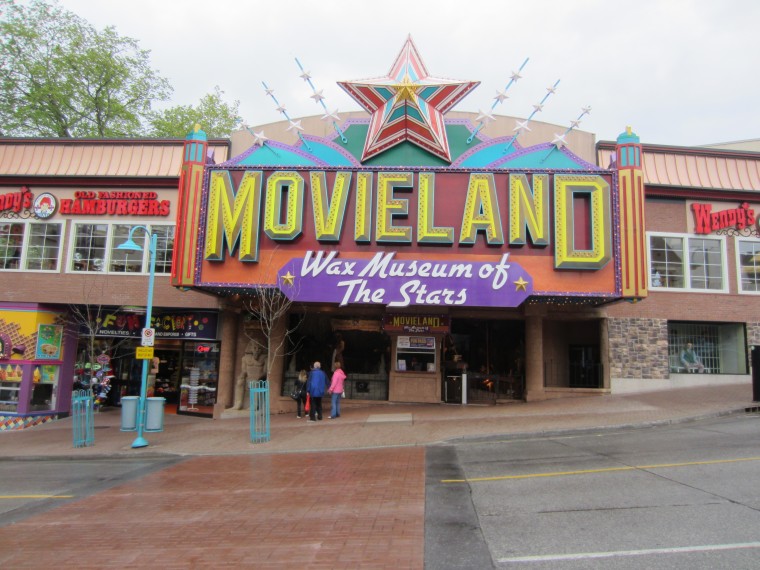 As I’d hoped, Movieland’s wax creations are of varying quality, and with all respect to them the majority of them aren’t very good.

In fairness, whoever decorated the place did a great job, because the environments the waxworks are placed in are much better than those in Madame Tussaud’s in London in my opinion, but obviously it’s the waxworks themselves that are the star attraction and it’s here where Movieland struggles.

Still, that doesn’t mean I didn’t have great fun – fun I will now transmit to you via the medium of photography. As ever, click on the pics to see them in all their grisly detail. 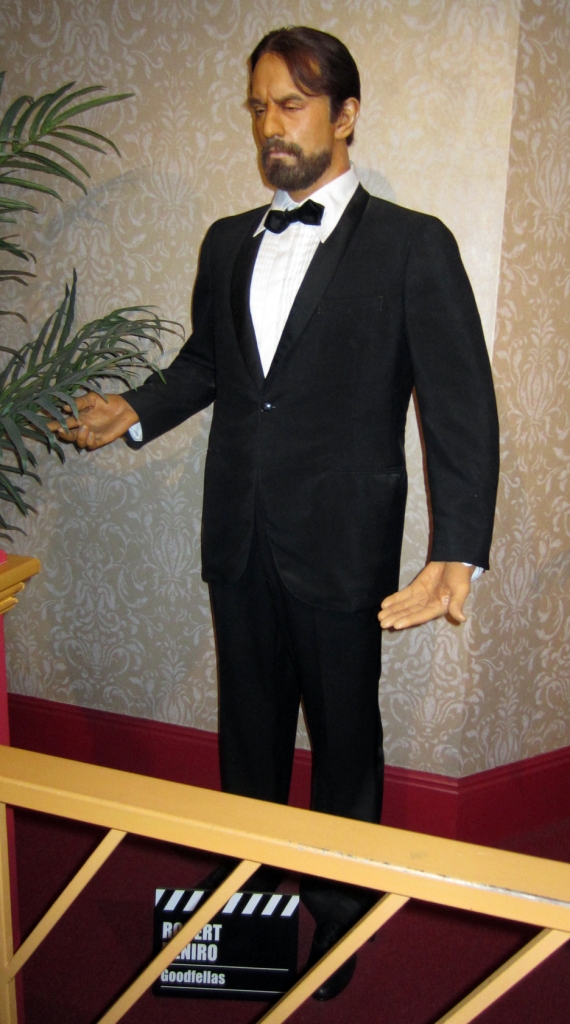 This is apparently Robert De Niro. He is unhappy because he’s just realised the plant he’s been put in charge of tending to is a bad fake. Wait until he realises he’s a bad fake too: shit is likely to go down. 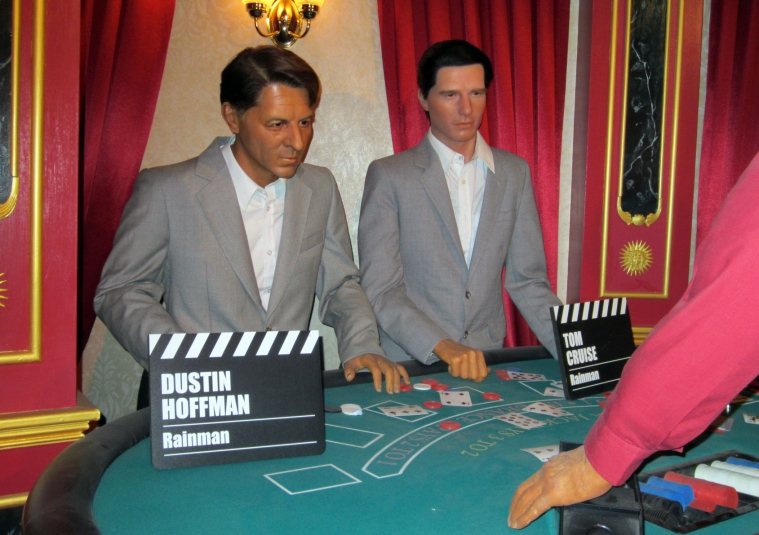 What’s that? You don’t recognise Dustin Hoffman and Tom Cruise from the hit motion picture Rain Man? Then you, sir or madam, are an ignoramus.  You should also recognise their Primark suits. 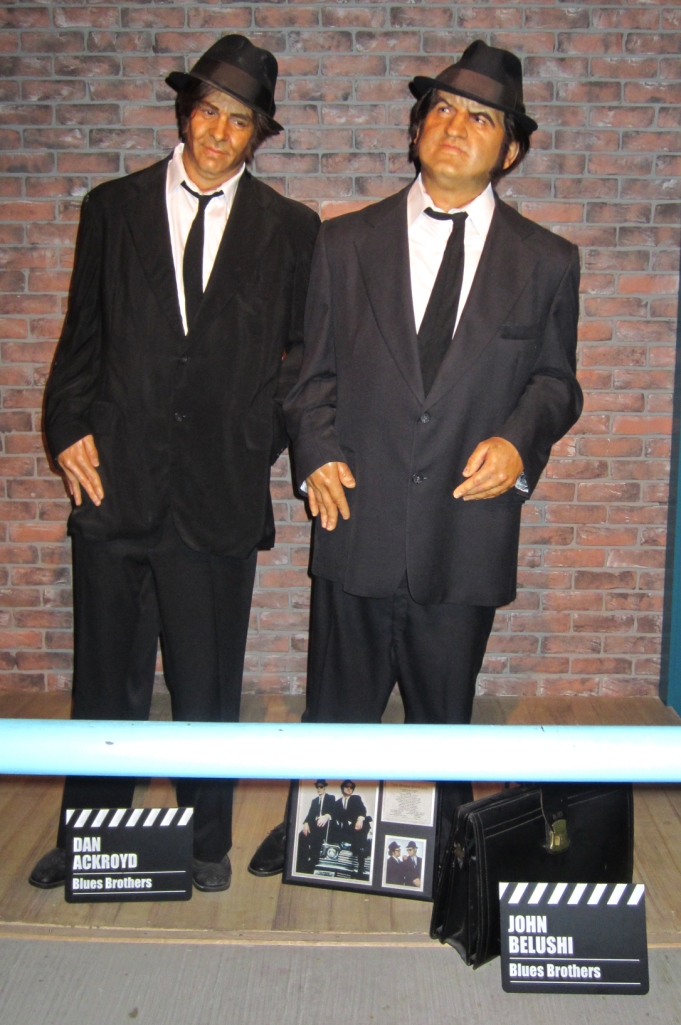 The Blues Brothers are “on a mission from God”. Presumably part of that mission involves finding out where the real Dan Ackroyd is, and who replaced him with a homeless person from the 1930s. 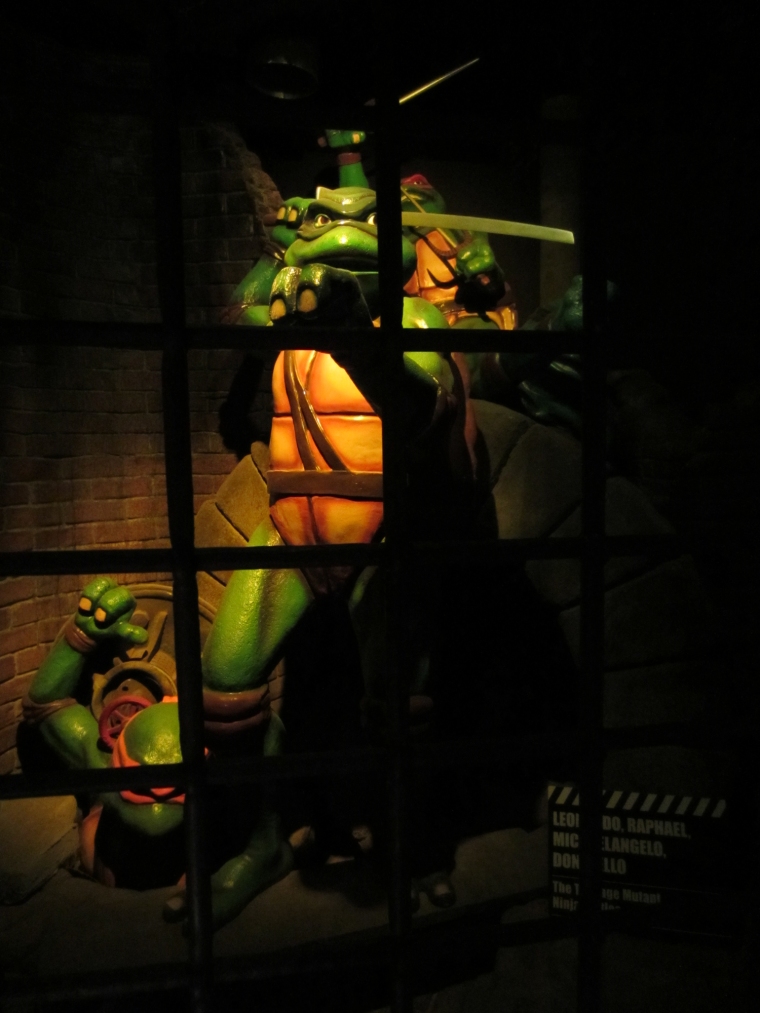 I’ve put this one in to show that, in fairness, not all the waxworks at Movieland are bad. Indeed, pretty much every waxwork of a non-human character is brilliant (with one exception that we’ll get to later). It’s just a shame they can’t do people properly. 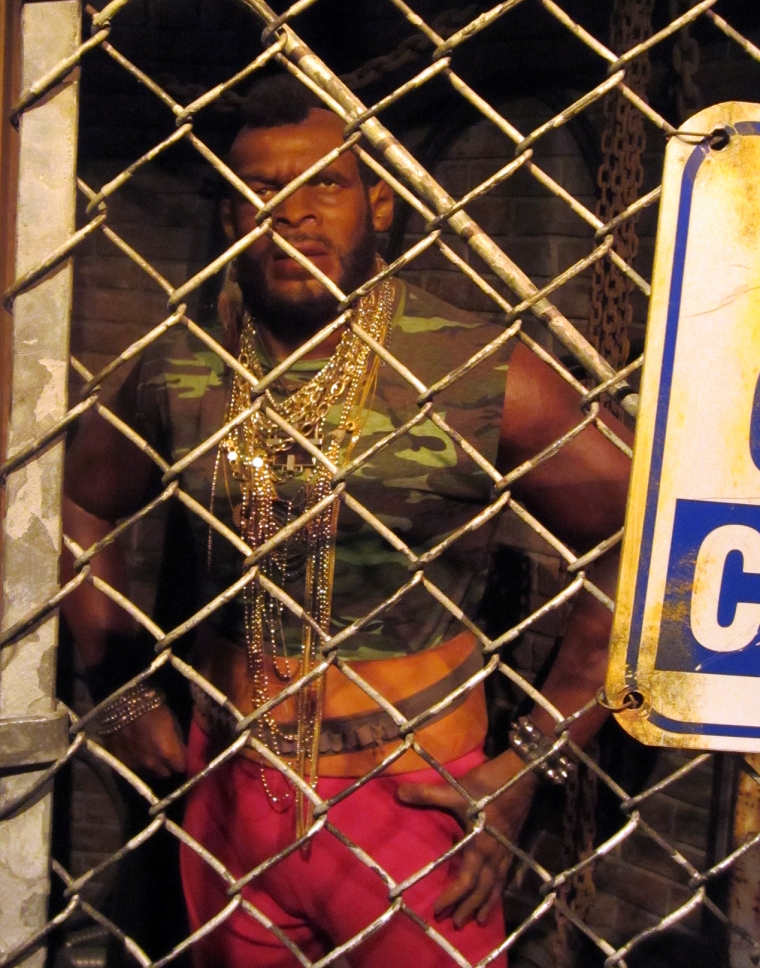 Yes, this is definitely Mr T and not just a generic-looking muscular black man with a mohawk and a dodgy beard. I PITY THE FOOL who created this waxwork! HAHAHAHAHA! Seriously though, I pity him. 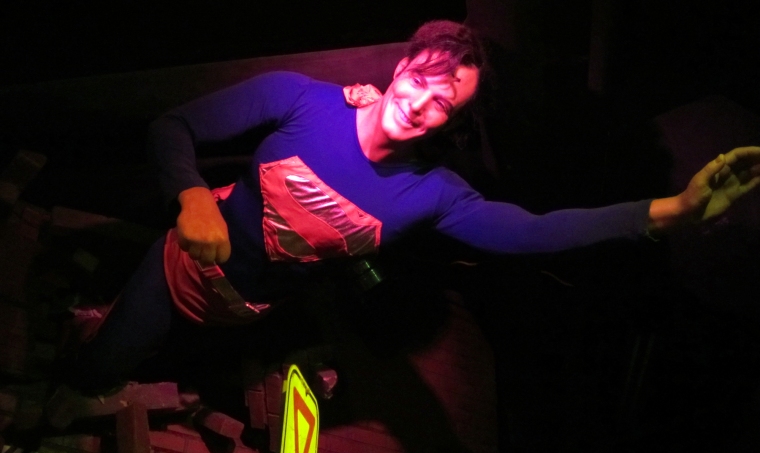 I bet you didn’t know Hugh Grant once played Superman, did you? How could you have forgotten? He was easily the most delightfully awkward Superman I’ve ever had the pleasure of watching. 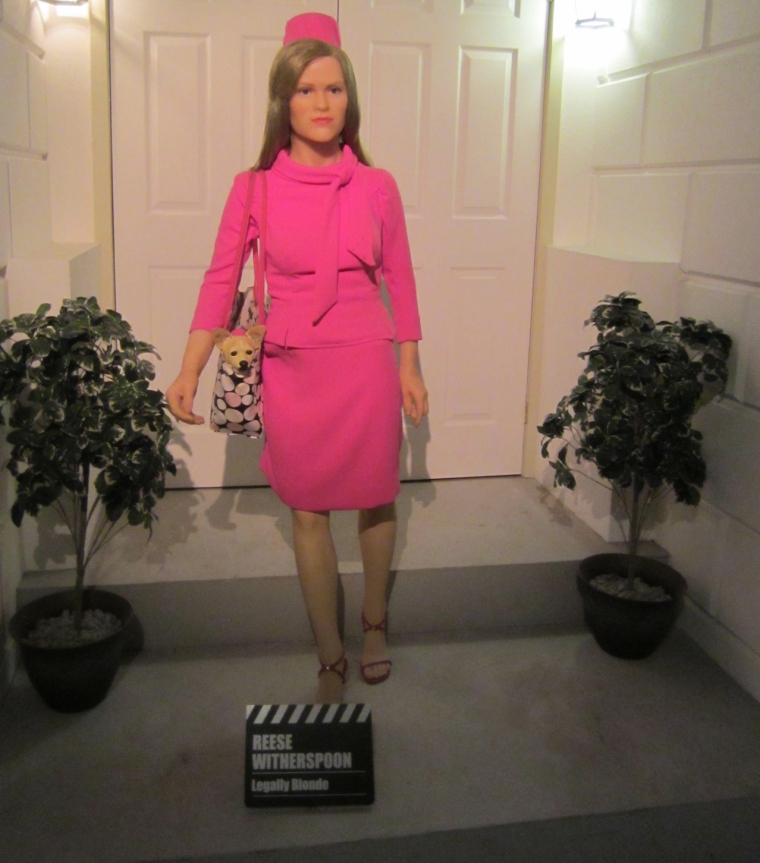 Thank Christ for those name cards, by the way. When I first saw this I was surprised that Lady Penelope from Thunderbirds was so popular in Canada, then when I realised it was supposed to be Reese Witherspoon I simply shook my head and tutted angrily as a single tear rolled down my cheek. 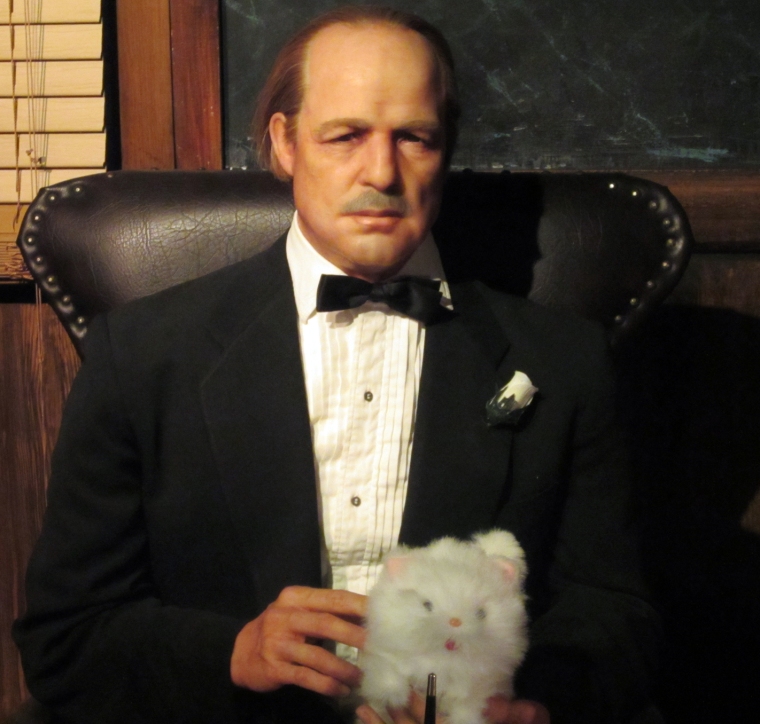 Ah, it’s Marlon Brando in his most famous role, Don Corleone from The Godfather. Except this is clearly from the Director’s Cut, in which Don Corleone has a full head of hair and he strokes one of those yappy toy cats that do backflips. Still, at least the Al Pacino can’t be much worse than this. 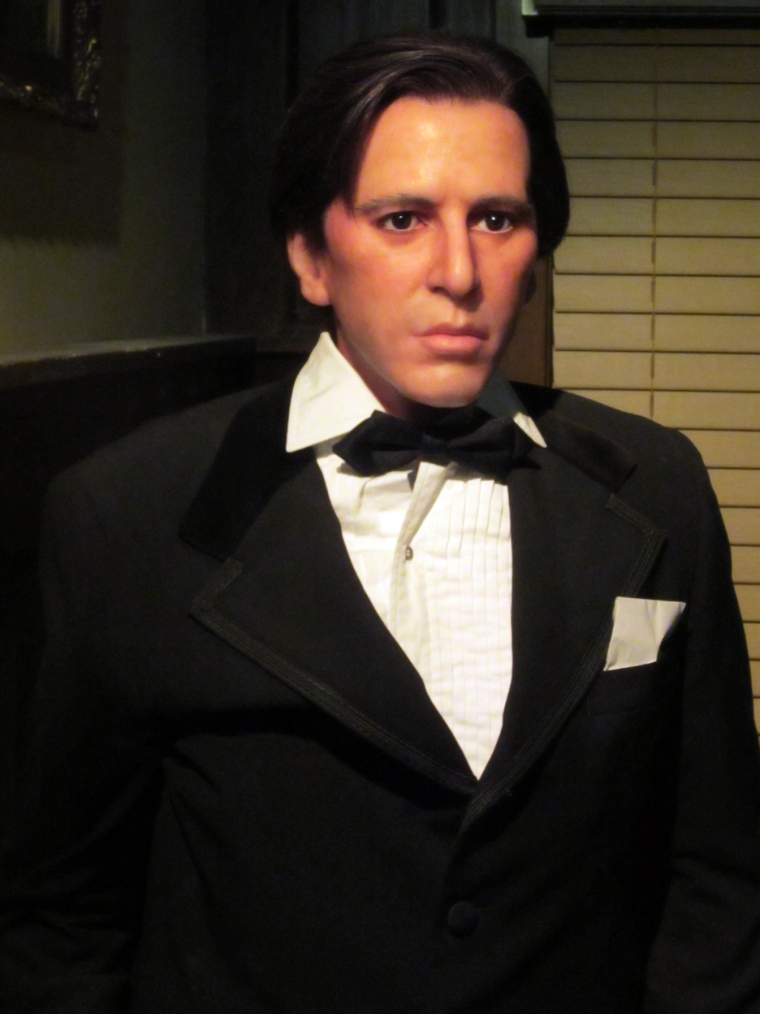 Oh, Jesus Christ. It looks like a cross between Rob Brydon and Richard E Grant. Who in God’s name sculpted this, took a step back, studied it in all its dubious glory and thought “yup, that’s Pacino alright”? 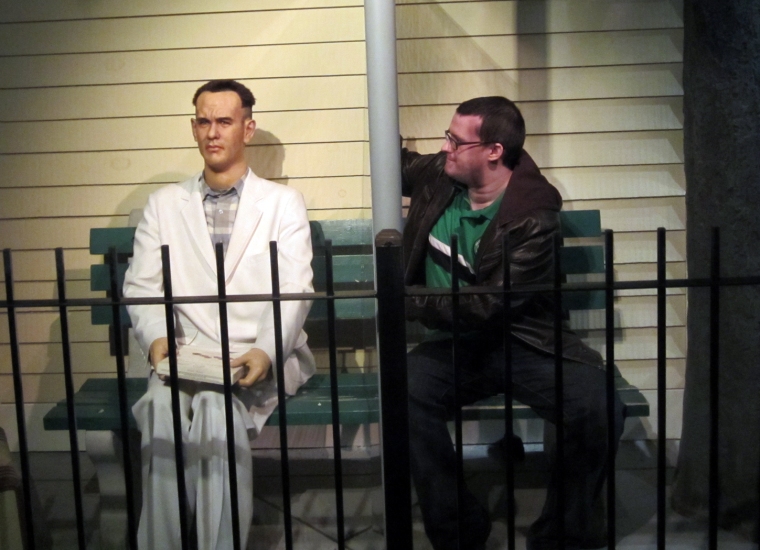 I didn’t get this bit. It’s clearly Tom Hanks as Forrest Gump, and it’s actually one of the better waxworks of a human character at Movieland. But why in the hell did they put a big pane of glass through the middle so you’re not able to properly sit on the bench next to him and pose for photos? I know you’re probably thinking: “It’s to protect the waxwork, Chris.” But if that’s the case, then…

…you would think the California Raisin version of the Obamas would have been protected too. After all, surely a powerful political figure is far more subject to abuse than some simpleton from a film released nearly 20 years ago?

Remember when Ray Romano was in Happy Gilmore? It’s somewhat odd that this waxwork of Adam Sandler looks more like Tom Cruise than the Tom Cruise one did. Someone needs to rethink their career. 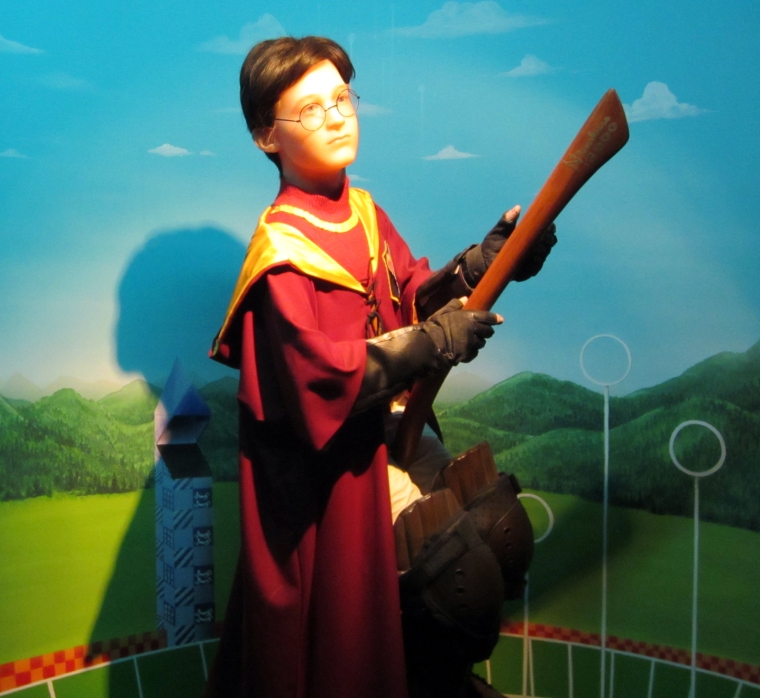 You could probably argue this one doesn’t look like Daniel Radcliffe by saying: “This is the Harry Potter from the books, not the movies, so his look is down to their discretion.” And then I’d point out the place is called Movieland, and your argument would die on its arse. 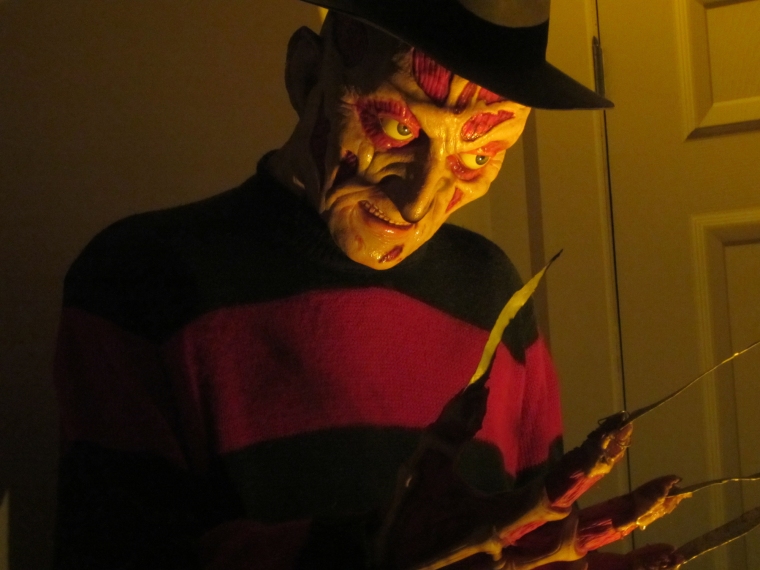 This is based on the Wes Craven’s New Nightmare version of Freddy Krueger, as opposed to the standard A Nightmare On Elm Street version which may explain why his makeup isn’t what you may be used to. It doesn’t mean he doesn’t still look like a complete nerdlinger though, mind you.

That’s funny, I didn’t realise JLS were so popular in Canada that one of them could feature in Movieland. He clearly looks sad because his fellow bandmembers aren’t there with him. 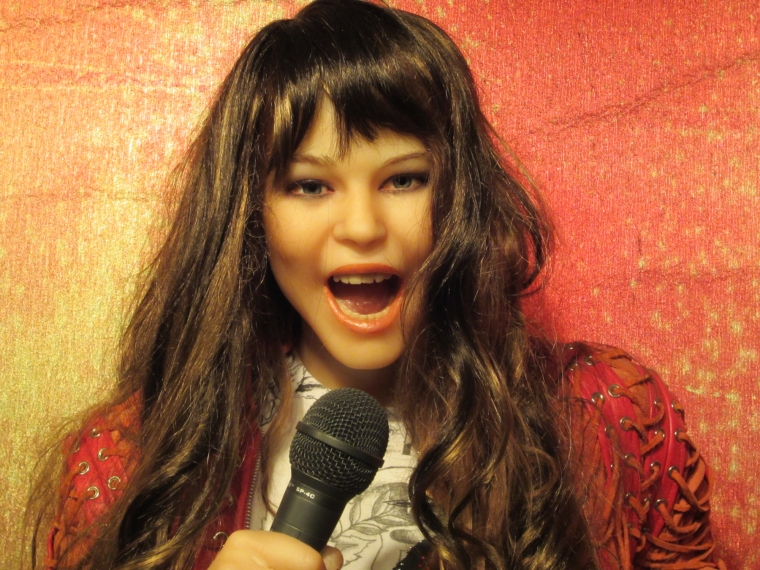 This is probably one of the worst waxworks in Movieland. Believe it or not, this is supposed to be Miley Cyrus as Hannah Montana, and not Joss Stone.  This does not in any way share any properties with Miley Cyrus, other than the fact that she occasionally holds a microphone and she too has eyeballs. 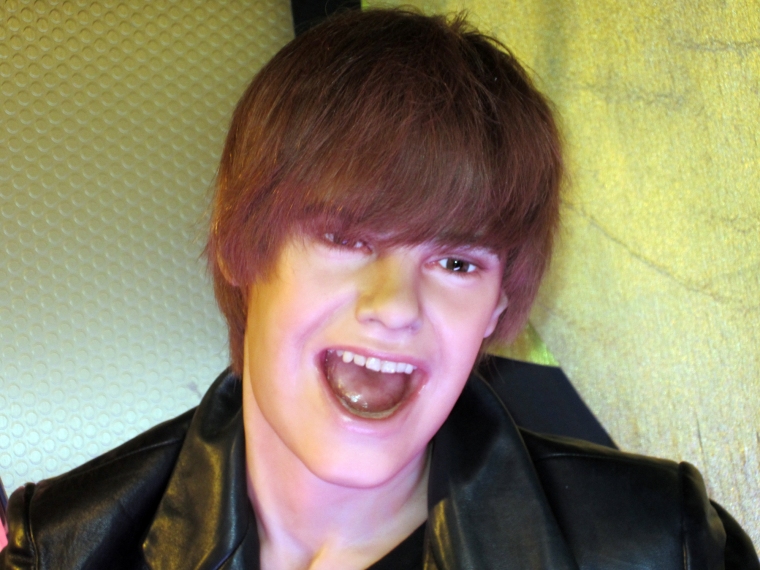 “DUUUUUH HEY DOOODZ.” Actually, let’s not make fun of him. Movieland is clearly so ahead of the times that it’s already predicted a future where Justin Bieber has developed some sort of brain disorder and his naturally good looks have been horribly eroded due to months of electro-shock therapy taking their toll.

I have to admit, I cried openly when I saw this. I have to give Bieber’s teenage fans some credit because they were crying when they saw it too. Those young ladies have their heads screwed on with regards to their hero’s future brain trauma and clearly understood the gravity of the situation. 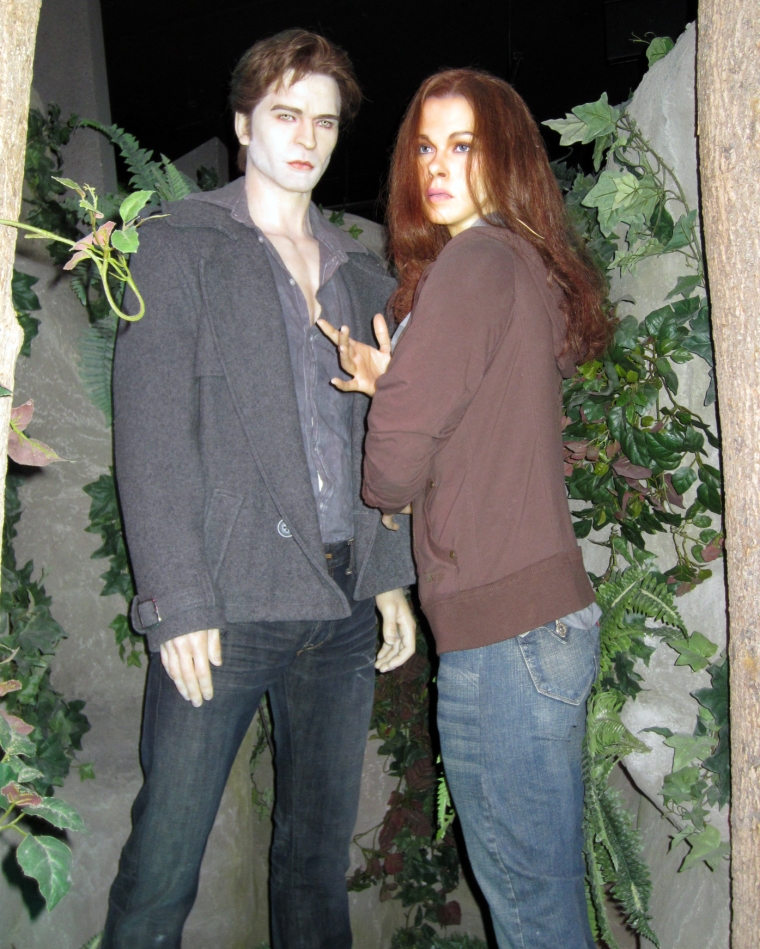 Okay, they’ve got R-Patz down reasonably well here, but remember what I said before – they’re only good at doing non-humans. Take one look at who I’m presuming is Kristen Stewart and not some random Twilight fan and Movieland’s “who are ya” policy blasts back into full force. I’m not surprised she looks confused – apparently one of Edward’s other vampire skills is the ability to twist her hand into an unnatural pose. And finally, the worst of the bunch: 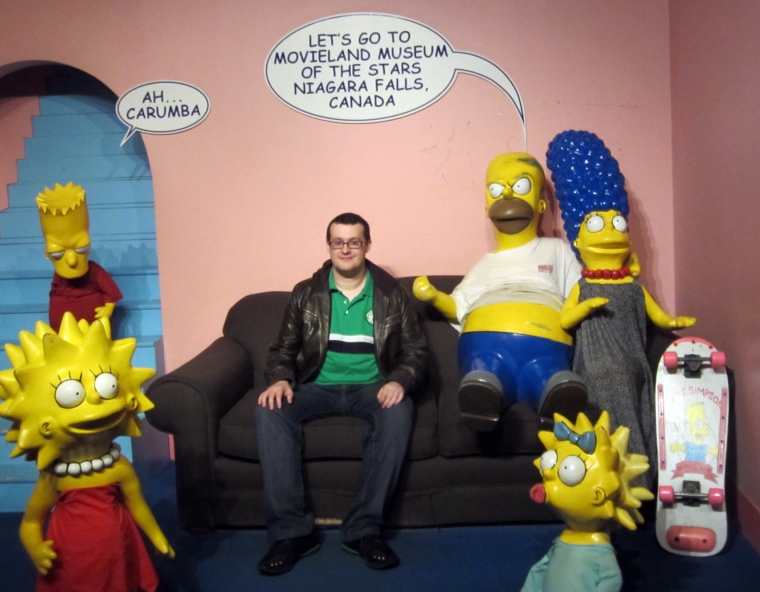 For once in my life, I’m struggling to find the words necessary to sum this up. Bart is sadly exclaiming “ah carumba”, presumably so disappointed that he only has one arm that he’s forgotten how to say one of his own catchphrases properly.

Lisa looks like Linda Blair from The Exorcist, Maggie’s head is enormous, and as for Marge and Homer… oh dear. I haven’t seen every episode of The Simpsons ever created but I’m pretty sure Homer’s never said that, and if he did the response would presumably be Marge saying “let’s not bother Homer, it’s fucking balls mate.”

So there you have it, that was Movieland. Despite all the above I still recommend you go there if you visit Niagara Falls, just so you have extra ammo in your arsenal when you’re at a pub with your friends playing What’s The Shittest And Greatest Place You’ve Been To. Handily, Movieland fits neatly into both categories.