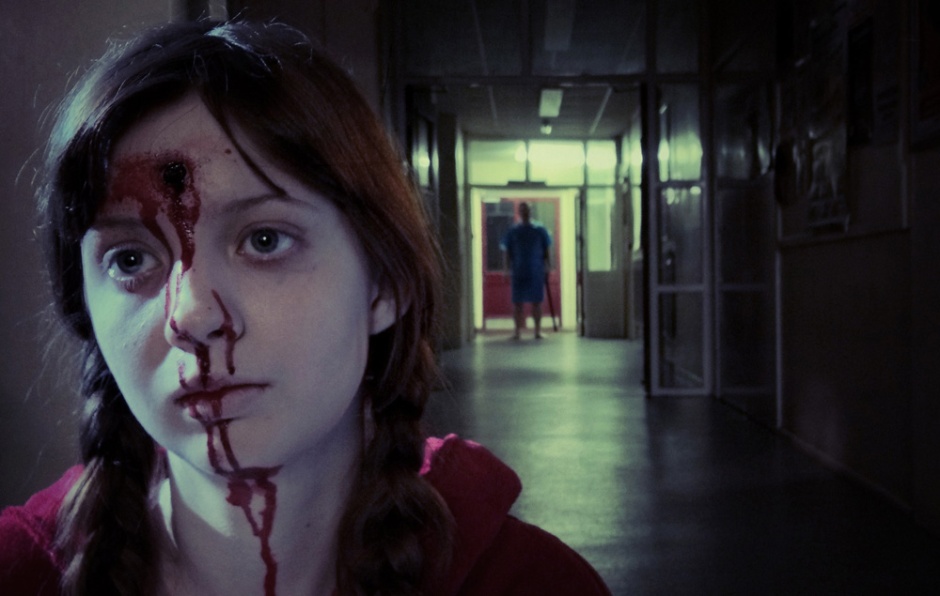 DELANEY – “It always hangs in the air. No matter how much we bleach the floor, there is always that smell of death.”

In December 1975, George and Kathy Lutz moved into 112 Ocean Avenue, a house in Amityville where thirteen months previously, a man had shot and killed six members of his family.

The Lutz family left the house after only a month, claiming they had been terrorised by evil paranormal forces living there. A book entitled The Amityville Horror was released two years later and the story went on to spawn a number of movies.

The Amityville Asylum is the eleventh movie to use the Amityville story as part of its plot, but in reality this review’s already discussed it more than the film does.

What we actually have here is a low-budget film shot in Wales, with a bunch of British actors trying to sound American while wandering around a spooky asylum and a tenuous link to the Amityville story shoehorned in to make the film a better sell.

Lisa (Sophia Del Pizzo) takes on a cleaning job at an asylum. After meeting her co-worker Delaney (Lee Bane) she’s taken on a tour of the facility.

This entails meeting each patient, getting an impressively detailed rundown of their entire backstories (from a man who’s only another cleaner, mind), and being told how to use the cleaning equipment.

In fact, the scene in which she’s shown all the different types of cleaning products and how to use them all goes on for a mystifyingly long time, to the extent that I ended up thinking “this HAS to end up becoming a plot point later on”. Nope. Just a long scene on how to use bleach.

As time goes on at the asylum, Lisa is subjected to a number of disturbing incidents. One night she sees a young girl wandering the halls. On another night, upon spotting a supposedly mute and catatonic elderly patient also roaming the hallways, said patient tells Lisa she’s going to die.

Worst of all, another patient – this one a resident in the dodgily-titled Ward X – claims to have supernatural powers, somehow knows Lisa’s mum died and mocks her for it. All very unsporting, I’m sure you’ll agree.

Each time something happens, Lisa informs Delaney and the asylum’s orderlies, but they don’t believe her, until eventually things get a little odd and, quite frankly, the plot becomes a complete mess.

If I can be blunt for a second, I’ve had shites that were scarier than The Amityville Asylum. The so-called ‘creepy’ bits pass harmlessly by and the parts that are meant to be shocking twists are about as harrowing as getting the hiccups.

Incredibly, it also has the balls to try the tired “you’re telling me X? But that can’t be true because Y” twist – the oldest trick in the book – twice in the space of twenty minutes.

What’s that? You saw a little girl in the hallway? But the youngest patient we have here is 20. DUM DUM DUMMMM. And what? The old woman who doesn’t talk just spoke to you? But she died last night! DUM DUM DUMMMM.

I’m sorry? Your film’s called The Amityville Asylum? But it’s got fuck all to do with Amityville! DUM DUM DUMMM(B).

Eventually, the film does reveal its tenuous (and ridiculous) link to the Amityville series. It turns out the asylum was built on the grounds of the demolished Amityville house and as such the so-called ghosts that haunted it are now in the asylum.

Um, except in real life the Amityville house still exists, making this a load of bumwash that’s just jammed the Amityville story in for some extra notoriety.

Shite plot and atrocious ending aside (there are something like three different attempts at a twist in there, each one randomly ditched and replaced with another like an indecisive shopper trying on dresses), it’s horribly shot too.

Sometimes the camera will go out of focus halfway through a shot, and that’s during dialogue scenes where there’s no real excuse for it. Other shots are even more distracting, particularly when the camera is placed behind a door, or a table, or a wall in an attempt to give a sort of ‘voyeur’ feel that ends up more like an ‘I can’t see half the fucking screen’ feel.

There’s even a character in there who can’t fucking pronounce ‘Amityville’ properly, choosing to go with “ah-MITTY-ville” instead of “AH-mittyville”. Fuck me.

The only saving grace, and the only thing that rescues this film from an infamous ‘half a Trevor’ score on TWABM, is Sophia Del Pizzo in the lead role of Lisa.

Her American accent’s about as accurate as my Indian one (let’s just say I’m never allowed back in Tandoori Palace again), but that aside she really does try to polish a turd. She puts in a believably ‘normal’ performance – and I mean that in a good way – and I’d love to see her in something good in the future.

But this definitely isn’t it.

The Amityville Asylum‘s low rating earns it a place in the notorious TWABM Hall Of Shame. Click here to see what other pishfests made the grade (or, indeed, failed to).

HOW CAN I SEE IT?
The Amityville Asylum is only available on DVD. You can get the UK DVD here and get the US DVD here.