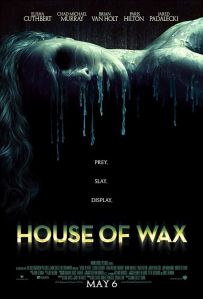 I’ve had my own experiences with real-life atrocious wax museums in my life – the Movieland museum in Niagara Falls springs to mind – but at least I wasn’t turned into a wax model while I was there. Mind you, I’d have probably made for a more accurate Mr T than the one that featured there.

The original House Of Wax (1953) was a cracking, eerie film about an insane waxwork artist (played by Vincent Price) who turned real people into wax models. That concept – humans as wax models – is the only thing other than the title to remain in this remake. What’s been learned in the ways of suspense and film-making in the 52 years between each film? Not much, it seems.

The 2005 version of House Of Wax starts off, as so many generic teen horror films do these days, with a bunch of annoying students on a road trip. This time they’re heading to “the biggest football game of the year” (because presumably “The Superbowl” was trademarked) and decide it’s best to cut through the countryside roads to get there. As night draws near, they decide to camp out in the middle of nowhere.

Except it’s not quite the middle of nowhere because there’s an odd town nearby with a waxwork museum as its main highlight. When the group wake up the next morning and find the one of their two cars has been sabotaged they split up – some of them take the working car to the football game, the others stay behind to try and fix the car, ultimately finding the creepy town and House Of Wax in the process.

Cue the appearance of a pair of fucked-up twins (both played by Brian Van Holt) who have a habit of turning people into wax models. In fact, there’s something about the entire town that doesn’t quite feel right, but I’m wary of straying into spoiler territory so I’m not going to wax lyrical too much (WAX! HAHAHAHAHAHAHA! Look, shut up, I haven’t done this for a while).

House Of Wax provides an interesting mix of expected and surprising moments. It was expected that Paris Hilton would be about as good at acting as she is at finding a boyfriend who ensures what happens in the bedroom stays in the bedroom, and she doesn’t disappoint with a performance about as thrilling as sitting a book in the window for six months and watching the sun fade the colours out of it. However, the level of gore is surprising given the MTV-gen audience Miss Hilton’s presence was clearly aimed at.

Fingers are cut off with pliers, someone’s decapitated, there’s a graphic neck-stabbing, a face is peeled off… you might be surprised by how graphic the film is at times, especially considering its BBFC 15 certificate. Fair play to the film-makers then for not being afraid to push the limits.

Hilton aside, the rest of the cast are adequate enough though it’s only really Cuthbert as the lead heroine and Van Holt as the twin villains who stand out as above average. Perhaps the most interesting character of all is the House Of Wax itself – it’s dripping (literally at times) with atmosphere.

House Of Wax is an adequate enough slasher and the final confrontation in the house is impressive, though with a runtime of nearly two hours it’s a tad too long. Only really a must-see if you desperately want to see Paris Hilton die a grisly and graphic death – which, to be fair, some people probably do.

HOW CAN I SEE IT?
House Of Wax isn’t available on any streaming service at the time of writing, so you’re going to have to go down the physical disc route. UK readers can get the DVD for a couple of quid here

or, if it’s HD you’re after, you can get the Blu-ray here

. Both include a few extras including an alternate intro with a nice face-smashing scene and some frothy behind-the-scenes shit about how they made the film with “very few optical effects” (supported – perhaps by a mischievous editor – with a before-and-after pic of a scene that’s almost entirely CGI). US readers can get the DVD here

and the Blu-ray here