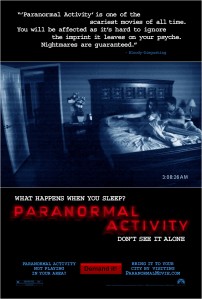 MICAH – “What if we just get this Ouija board and we find out what it wants and then we give it what it wants? Then it’s gone.”
PSYCHIC – “Because what it probably wants is Katie.”

You wake up in the middle of the night. In the darkness you can just about make out a black shadow standing at the door. It doesn’t move. It’s just standing there, watching you. You close your eyes but when you open them again the shadow is still there. In a panic, you slowly reach down to the side of your bed, being careful not to take your eye off the shadow, and grab your phone, turning it on. What little illumination it provides is just enough to dimly light the room and reveal… a coat, hanging from the door. Relieved, you lie back down again and close your eyes, but something lingers in your head that maybe, just maybe, the coat was a trick and the real monster is still quietly and invisibly watching over you.

If you can relate to this sort of thing and have experienced similar moments before where you’ve nervously studied shapes in the dark to figure out what they are, then Paranormal Activity may quite frankly scare the shite out of you, despite what the “big men” say.

You know the sort of people I mean – the ones who pipe up any time The Exorcist is mentioned, just so they can sound tough and say “Exorcist? Ha, that wasn’t scary at all… in fact, I laughed all the way through it”. Deep down you know that either they’re lying, they didn’t allow themselves to get so emotionally involved with it or, as is increasingly likely these days, they didn’t watch it in the right conditions. And it’s the latter that’s crucially important when watching Paranormal Activity. But more on that later.

The film follows Katie and Micah (the actors used their real names), a couple who have just moved into a new place having been together for three years. One day Katie decides to tell Micah that when she was younger she experienced some paranormal goings-on involving ghosts and the like, and that she’s getting concerned because odd little things have now started happening in their house, such as the lights flickering and whatnot. Rather than getting an electrician in, the excited Micah decides to go and buy a video camera so he can document everything and pretend to be a ghost hunter. As the days pass, these incidents become more regular and more extreme, until it becomes clear that the otherworldly being that hassled Katie when she was a young’un has followed her to her new home and is kicking the haunting up a notch.

As you may have guessed by the whole video camera thing, Paranormal Activity is one of those “found footage” jobbies in the style of The Blair Witch Project, Troll Hunter and Cannibal Holocaust in which it’s claimed that the people in it are completely real and the events actually happened. It opens with a message of thanks to the parents of the two lead characters for their co-operation, and closes with a simple copyright message with no credits whatsoever as if to suggest nobody “worked” on it and it’s just some footage that a couple shot themselves.

This isn’t the case, of course, but Paranormal Activity is so well put together you’d have to really be paying attention to the camerawork to realise this, meaning the vast majority of viewers don’t because they’re too busy watching Katie and Micah.

Indeed, it’s Katie in particular who truly helps Paranormal Activity feel authentic. Since Micah’s the one doing the filming for the most part it’s Katie who takes up the majority of screen time and she does a wonderful job. It may sound like an insult that she never seems like she’s doing much acting, but it’s actually the best compliment I can pay her – it’s very easy to believe she’s just a normal, scared young woman instead of an actress playing the role of one, and it’s this believable performance that gives the film that crucial authenticity.

The other thing handled masterfully in Paranormal Activity is the film’s structure and pace. Fairly early on the film makes its intended pattern clear to the audience – there’ll be daytime scenes where Katie and Micah interact with each other and build our emotional investment in them, followed by night scenes where spooky shit will happen, followed by more daytime scenes where Katie and Micah discuss what happened the night before. This may seem like a boring, rigid structure but it’s actually cleverly designed to focus your attention on other things.

In fact, the whole film is laid out in a way to make sure your attention is fully directed at what it wants you to be looking at. At night the camera is put up on a shelf and overlooks the whole darkened bedroom, and since it’s quickly made clear that “night = ghost time” then your entire attention is focused on every tiny aspect of the room – you’ll scrutinise every shadow, every hard-to-make-out shape, every slight movement for signs of ghostly presence.

Suddenly you feel like you’re back in your room, squinting at that black shadow on the door again. This time though you don’t have your phone to make things clearer, meaning you have to keep squinting in the dark. And when you’re concentrating that hard your senses are heightened, meaning when something does happen – and unlike Blair Witch it does actually happen regularly, be it in the form of a moving door, footprints appearing on the floor, bedsheets moving or even loud roars and bangs coming from downstairs – the fear is greatly amplified.

Later, just as you’re getting used to the film’s “daytime is fine, night-time is scary” routine, it shakes things up and creepy stuff starts happening in broad daylight. A Ouija board bursts into flames, a photograph smashes itself, and it slowly dawns on the audience that everything they thought they knew was wrong – after setting its own rules and waiting for us to accept and trust in them Paranormal Activity has broken them, betraying our trust and leaving us uncertain all over again. And that’s genius.

It’s not a perfect film – Micah isn’t a very likeable character and while his attempts to wind up the demon and his decision to use a Ouija board against Katie’s wishes are obviously there to advance the story, it does make it harder to feel sympathetic towards the far more likeable Katie as you feel she’s bringing it on herself a little by putting up with his bollocks.

The ending (the main theatrical one at least) is also a little disappointing, making use of CGI right at the end to go for a cheap scare that wouldn’t be out of place in one of those annoying “screamer” YouTube videos. For a film that so expertly delivers its suspense slowly and progressively throughout, it’s a shame that it resorts to cheap tactics right at the end for a generic Hollywood-style “final scream”. That said, it does have two other endings (one involving the police and another with a throat-slitting) which can be found online and don’t really fare much better, so maybe this is just a film that can’t really be concluded in a satisfying manner (I’d love to hear your suggestions though, comment below if you have any better ideas on how it should have ended).

If you’re going to watch Paranormal Activity, please do yourself a favour and watch it under the optimal conditions (as I was saying earlier). If you watch this film with a group of mates at a party or if it’s just on the telly in the background and you’re not really paying attention, the impact will be lost. This is a film that requires your full attention and really needs you to be studying every centimetre of its screen during the night scenes, so in order to get the most out of it you need to have a completely silent environment, the lights completely off and the sound up high enough that you can hear the slight buzz from the camera during the night scenes. Watch it like that and you will be terrified, no matter how much you lie about it to your pals afterwards.

WHERE CAN I SEE IT?
Due to its huge worldwide success, Paranormal Activity can be found dirt cheap these days on DVD and Blu-ray. Unlike The Blair Witch Project, this film was shot on a hi-def video camera so Blu-ray does make a difference. You can get the DVD here and the Blu-ray here. If you’re a LOVEFiLM subscriber it can also be streamed free online as part of your package.