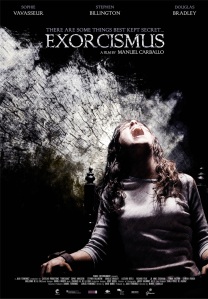 Typical bloody teenagers, eh? They mess around with their pals, they take drugs, they get possessed by the devil and try to kill their family members, they go to nightclubs… wait, hang on a tick. That doesn’t seem right.

Well, it’s certainly the case at least for 15-year-old Emma (the believable Sophie Vavasseur), who has started slipping into odd little episodes where she starts acting like a proper fanny then waking up and wondering what’s happened. Her parents take her to a psychiatrist but, suspiciously, he has a heart attack while having a session with her. Later she tries to kill her brother before snapping out of it and coming to her senses.

Well, she is possessed. Sorry if that seems like I’m spoiling things, but the film doesn’t really keep you in suspense for too long either. In fact, it’s only about half an hour in when she starts levitating in front of her family, leaving the audience in no doubt that these aren’t just teenage mood swings she’s having.

This makes for an oddly-paced film in which the cat is let out of the bag far too early and a struggle then begins to keep an exorcism interesting for another hour. This is handled by the priest’s strange decision to perform the exorcism over a number of small daily sessions, in between which Emma is free to leave the house and hang out with her mates, during which dodgy incidents inevitably occur.

The film’s various oddities and silly plot points aside (Emma’s brother is sent to stay with his aunt so he can stay away from her during the exorcism, but it soon turns out the aunt just lives next door and he ends up talking to her anyway), it’s refreshing to see an exorcism story taking place in a normal London suburb with normal British teens involved. The young actress playing Emma, Sophie Vavasseur, puts in a solid performance and while things do eventually get a little silly when she starts slipping into her devil voice she does the best she can with the lines she’s given and generally plays the lead role just right.

As the story progresses, Exorcismus chucks in more twists than a Curly Wurly, making sure that while you may know Emma is definitely possessed you’re still not entirely sure what’s going to happen. While none of these twists are exactly ground-breaking – it’s unlikely that the final revelation will shock you to the core – they at least retain your interest until the film’s end.

Despite being from the same Spanish production team as the fantastic .REC films, Exorcismus isn’t exactly going to be the sort of film that sticks long in your mind after you’ve seen it. The familiar location will make it interesting for British viewers, the lead actress does a good job and fans of possession films will be interested in the different ways this film takes the subject. It’s not terrific by any means but it’s a decent little flick. Oh, and a word of warning – if you’re tempted by this one because you’ve heard that Doug “Hellraiser” Bradley is in it, don’t get too excited, because he only pops up for literally one scene near the end.

WHERE CAN I GET IT?
Exorcismus is available on DVD and only costs a couple of quid new on Amazon UK, so if you fancy giving it a go you can get it by clicking here

. If you bleed stars and stripes, on the other hand, you can get the US DVD right here

If you enjoyed this review and would like to read more, here’s a complete list of reviews on That Was A Bit Mental.