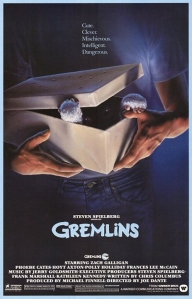 “I warned you. With mogwai comes much responsibility. But you didn’t listen.” (Old man, Gremlins)

When it comes to Christmas presents, some people like to keep it simple. A few DVDs, a book or two, maybe some flowers or the ever-reliable box of Quality Street. Not so with Randall Peltzer’s dad. A dodgy inventor by trade, Randall decides that this Christmas he’s going to surprise his son Billy with something he’s never seen before in his life. While on a trip through Chinatown selling his wares, he comes across just the thing – a mogwai.

After naming it Gizmo, Randall gives Billy the mogwai while also passing along three very important instructions given to him by the shop owner – keep it away from bright lights, don’t get it wet and, above all else, don’t feed it after midnight. It’s like taking care of a fat goth, basically. Anyway, guess what happens next?

That’s right. After getting Gizmo wet and discovering it makes him multiply and spawn loads more mogwai, Billy’s clock dies and he accidentally feeds these new mogwai after midnight, causing them to turn into evil monsters called Gremlins.

At the time, Gremlins was a revelation. The creature effects were incredible, its sense of humour was the exception rather than the rule and it gained a large following, and for good reason. These days, sacrilegious though it may be to say it, Gremlins suffers from the same problem as Child’s Play in that it spends too long revealing what we already know. Whereas the sequel, Gremlins 2: The New Batch, kicks off the action fairly early into the film, the original spends a lot of time faffing around with the rules, letting us get to know Gizmo and only revealing the monsters at the end of the second act.

What’s more, moments that would have been hilarious at the time are merely smile-inducing these days, with the exception of the fun bar scene in which the Gremlins smoke a lot of cigarettes and generally take over the place.

If you’ve never seen it and have somehow managed to avoid the whole integration of its ‘three rules’ in popular culture then Gremlins is worth a watch because it’s still a fun movie, albeit one whose structure has been mimicked and refined many times by other films over the years. Otherwise, if you already know the deal with the Gremlins and you don’t want to spend the first 50 minutes waiting for the other characters to catch up with you, it might be worth skipping straight to the sequel first.