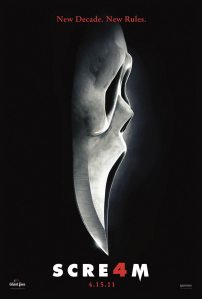 “All there are now are remakes. It’s the only horror studios green-light. I mean, there are still rules, but the rules have changed. The unexpected is the new cliche.” (Charlie, Scream 4)

What’s more, the clever post-modern ideas made popular by Scream – that the characters in the movie reference the rules and situations in other horror movies – are now freely imitated in many of today’s films, with almost every slasher these days containing one wisecracker going on about how you’re never supposed to say “I’ll be right back”, how the black guy always dies first and so on and so forth.

Scream 4, then, had an uphill battle to be relevant in this new all-knowing, self-referential, nudge-nudge-wink-wink horror landscape, one the Scream series itself essentially created in the first place. It’s impressive, then, that writer Kevin Williamson and director Wes Craven have taken these decade-old characters and ideas and brought them into the 2010s so convincingly, giving them more modern sensibilities but still keeping the elements of what made the original trilogy so popular in the first place.

And so the usual “what’s your favourite scary movie” spiel continues, with newer films added to the killer’s trivia repertoire and more graphic threats made over the phone. The killer is made harder to identify now because it’s revealed early on (when someone calls their friend to trick them) that there’s a voice-changing phone app, one that potentially anybody could be using. The film geeks this time are a couple of horror nerds who screen annual movie marathons of the eight Stab films.

And yes, those classic ‘rules’ once again return, but this time updated for this new generation with new rules about remakes, which Scream 4 seems to focus most of its criticism on – I wonder if the remake of Craven’s A Nighhtmare On Elm Street had something to do with it. Indeed, the whole third act of the movie, without giving too much away, is very much influenced by the deluge of horror films we’ve seen recently, with one humorous moment in particular seeing a distressed Hayden Panetierre answer one of the killer’s phone questions by screaming out a seemingly endless stream of films that have been remade in the past decade, drawing stark attention to the sheer number of them.

While three cast members from the original trilogy – Neve Campbell, David Arquette and Courteney Cox – all return for Scream 4, it’s perhaps unsurprisingly Cox who steals the show. Campbell is her usual drab, miserably-voiced self, while Arquette’s character seems to have shaken off his permanent limp from the previous film and is now the sheriff, essentially making him a bit of a dick. Cox, however, is hilarious as Gale Weathers, suffering writer’s block as she tries to get back in the spotlight while jealously watching on a Sidney (Campbell) has success with a book of her own and her husband Dewey (Arquette) flirts with his new female deputy. Almost all of the best lines belong to Gale, to the extent that it’s almost exciting to see her turn up in another scene because you know something else is coming. I never thought I’d be praising Courteney Cox as the star in a school play, let alone a film, but fair play to her.

Of course, it wouldn’t be a Scream film without a whodunit plot, and while the red herrings are perhaps a bit too obvious and clearly overacting to make you think it’s them, the real killer’s identity is a nice twist that actually makes sense and results in a great performance from the cast member in question.

It’s worth pointing out that the final act of Scream 4 does assume some prior knowledge of at least the first film in the series at times, so while it’s not essential I’d recommend you at least go into this one having seen at least the original film (if not necessarily all three) because you’ll get more out of Scream 4’s references, particularly those near the end of the film.

While Scream 4 could never be the revelation and genre-changer the original film was, it still does a great job updating the series to address the changes in horror cinema since the trilogy ended. It’s probably the best of the sequels, and well worth a watch if you enjoyed the first Scream.