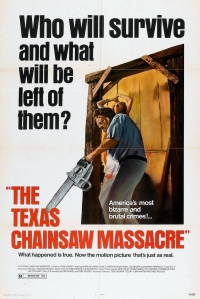 “I just can’t take no pleasure in killing. There’s just some things you gotta do. Don’t mean you have to like it.” (The Cook, The Texas Chainsaw Massacre)

Though it was never technically a video nasty, The Texas Chainsaw Massacre was refused a certificate for a theatrical release by the BBFC and as such remained banned for an astonishing 25 years in the UK. It actually wasn’t until 1999 that the film was finally given an 18 certificate and finally got a British cinema run. Quite a result for a film whose director was initially aiming for a PG rating.

This lengthy ban is particularly interesting when you consider that The Texas Chainsaw Massacre is actually fairly tame by today’s standards, at least in terms of graphic content. Indeed, there’s actually very little on-screen violence at all – instead the film relies on the power of suggestion to terrify audiences. In a way its real downfall was that it worked too well.

The film tells the story of Sally, her brother and their three friends who are taking a trip to Texas to stay at Sally’s grandfather’s house out in the countryside. There have been reports that some ne’er-do-wells have been robbing graves, so after a brief stop at the graveyard to check her granddad’s grave is still intact, Sally and chums head on down the road. They pick up a hitch-hiker who turns out to be a bit mental, but it soon turns out that’s just the start of their problems when they happen upon the Sawyer house.

You see, it soon emerges that all the graverobbings have been committed by a weird, possibly in-bred family who live together in a huge country house decorated with their own macabre creations. There are lamps made with human skin, chandeliers made out of bones and armchairs that quite literally have arms on them. That’s what happens when you live too far from an Ikea.

One by one Sally’s friends discover the Sawyer house while out wandering, and one by one they encounter Leatherface, the huge mentally troubled son of the household who’s taken on the “mother” role. Being the “mother”, Leatherface is in charge of preparing the dinner, and being that the family are a bunch of cannibals, that means capturing his new guests and turning them into that night’s dinner.

This leads to some of the more infamous scenes in ’70s horror, including one in which a young chap is smacked in the head with a mallet, his legs convulsing as the skull fragments enter his brain. Then there’s the notorious ‘meathook scene’ in which a girl is dragged into the kitchen and literally hoisted up and onto a meathook through her bare back, then writhes around screaming while Leatherface cuts her boyfriend’s head off with a chainsaw.

Incredibly, despite the gruesome descriptions there is very little blood spilled in these scenes. You never see the hammer hit the head, you never see the meathook going in the back, you never see the chainsaw actually touching anyone. Using the same principle that The Human Centipede would copy 35 years later, the film relies on the audience’s ability to fill in the gaps themselves. Whereas actually seeing a meathook pierce the victim may not have worked out so well because the effect could have been hokey and unrealistic (especially given the film’s shoestring budget), by cutting away just before impact the viewer imagines the worst possible outcome in their head and it becomes far more powerful than it ever could have had it been shown.

Despite its incredibly low budget (the whole film cost around $83,500 to make) The Texas Chainsaw Massacre is an impressive looking movie at times. It’s clear that director Tobe Hooper (who would go on to do Poltergeist) had a good eye for effective shots at this early stage in his career, and some – such as the van picking up the hitch-hiker and Leatherface’s frustrated tantrum at the end of the movie – are breathtaking.

The cast are also believable too. The five teens each have their own distinct personalities and although it’s clear that Sally and her brother are the main characters and given more opportunity for character development, you can ultimately relate to all five. Meanwhile, the Sawyer family are all as mental as a washing machine filled with bacon and this really comes across well in their performances, particularly Gunnar Hansen as the neglected, scared and yet terrifying Leatherface.

The Texas Chainsaw Massacre is a classic in the horror genre. It may not be to everyone’s tastes, and while it’s tame by today’s standards some many still not like the unrelenting nature of the horror (the final 30 minutes in particular are essentially non-stop screaming, mental torture and noise). If you can stomach the insanity though you’ll find yourself stunned at how such a low budget could produce such an effective film. Essential.

WHERE CAN I BUY IT?
British would-be Texas Chainsaw viewers with a Blu-ray player can get the stunning “Seriously Ultimate” edition for less than a tenner by clicking here

, otherwise you can get the three-disc DVD by clicking here. Both have the same features (hours upon hours of great documentaries), but the Blu-ray fits it all on a single disc and naturally looks a lot better too.
American peeps, meanwhile, can get the Blu-ray here

and the DVD here