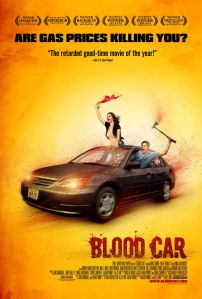 “Puppies… you killed that girl with puppies.” (Archie, Blood Car)

It is the near future – a few weeks from now, to be exact. Due to a crumbling economic framework the oil market has collapsed, making petrol as rare as gold dust and turning the roads entirely car-free. Nerdy vegan Archie Andrews (Mike Brune) thinks he’s got the solution to the problem and is working on a car that runs entirely on wheatgrass, but it isn’t going so well. Until he cuts his finger.

When just a drop of his blood gets into the fuel tank, Archie’s custom-built car suddenly springs to life. He quickly realises that not only does his car run on blood, it works far more efficiently than if he was using petrol.

Driving the only car in town? Having two women fight over you? Sounds like a good situation for Archie to be in. What’s the problem, you may wonder. The problem is that Archie’s car starts running out of fuel again, and he can hardly keep draining his own blood to fill it up. He’s going to need more fresh blood, and the best way for him to do that is to start killing random people. Of course, being a vegan, that’s easier said than done.

Blood Car may be decidedly low-budget but that’s part of its charm. You forgive the cheesy special effects and the hammy acting because the cast seem like they’re having a ball and you don’t want to rock the boat by saying “um, no offence, but you’re shit Chlumsky”. While many of the jokes are iffy, there are some real winners in there and the film’s general quirky mood will eventually have you smiling.

The only real problem with Blood Car is the ending, which just gets so ridiculous it stops being the funny little horror film it is and instead becomes a film trying too hard for attention.

Blood Car is cheesy, it’s eccentric, it’s low-budget and it’s funny. It’s not the greatest film of all time and it’s not exactly packed with memorable, show-stopping moments but it’s a pleasant enough way to spend an hour and a half.