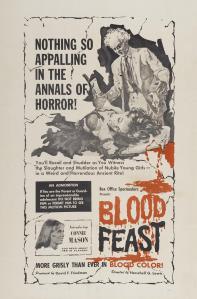 “Have you ever had… an EGYPTIAN FEAST?” (Ramses, Blood Feast)

Herschell Gordon Lewis is often referred to as the Grandfather of Gore. He was the first filmmaker to make a truly bloody movie, at a time when the likes of Psycho and The Birds were shocking mainstream audiences with their relatively bloodless terror. While nowadays we’d think nothing of a horror film where someone dies a bloody death, in 1963 it was a shocking sight.

It’s surprising then to see just how far Blood Feast goes, considering many credit it as the first ever gory movie. Eyeballs are stabbed, tongues and hearts are pulled out and heads are bashed in, leaving brains scattered on the floor. The effects aren’t very convincing (the blood is the reddest thing you’ll ever see) but it’s probably a good thing because it makes the film more entertaining. Had it had the realism of something like Saw or Hostel it would have been disturbing rather than enjoyable.

The plot’s fairly kooky. Ramses is an Egyptian caterer who has been asked by a wealthy woman to provide an Egyptian-themed feast for her daughter’s birthday party. Ramses is happy to help, mainly because he’s been killing lasses left, right and centre to prepare for an ancient Egyptian ritual in which he wants to bring an Egyptian goddess to life, and he reckons the party will be a great time to do it.

Despite the gore effects, the most entertaining aspect of Blood Feast is the bad acting. And when I say it’s bad I mean it’s absolutely atrocious. From the killer’s terrible accent and seeming inability to say a sentence properly (not to mention his laughably bizarre silver hair and eyebrows) to the mother of one victim who sound like she’s laughing when she cries, the performances are incredibly terrible. By far the worst/best of the bunch though is the chap playing one victim’s boyfriend, whose abysmal attempt at showing grief makes him possibly the worst actor I’ve ever seen. Here, see for yourself (if you think he’s bad at the start, wait until you see him when the police turn up):

The script’s great too. From the unfortunate euphemisms (talking about the murder case, one detective tells his partner “well Frank, it looks like one of those long, hard ones”) to some truly bizarre reactions (“Ramses was the killer we’ve been looking for, Mrs Fremont.” “Oh dear, the guests will have to eat hamburgers for dinner”) there are plenty of chuckles to be had.

Blood Feast is well worth seeing for a laugh, and at a brisk 68 minutes it won’t take up too much of your time. The gore is satisfying if unrealistic, but the acting is so bad that you’ll be laughing too much to care.

HOW NASTY IS IT? – I can understand how it would have been considered nasty back in the day but given how horrifiying the likes of Saw are these days this is laughably tame by comparison now.

AVAILABILITY – It’s now available uncut in the UK, but it’s out of print. There’s an uncut American disc which is region-free (so it plays on UK players), is cheap (about a fiver) and has good extras. If you fancy it then you can click here to buy it from Amazon UK and I’ll get 40p or something for recommending it. So not only can you enjoy a laughably bad film, you can also help me rob Amazon of some of the profit. Finally, as ever, here’s the trailer: