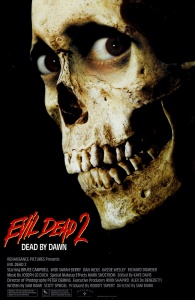 When The Evil Dead was released in 1981 it completely blew away the horror film industry.

Usually a success like this leads to a sequel following soon after but fans of the original had to wait six years for Evil Dead II: Dead By Dawn.

Why the delay? Well, Raimi was actually done with Evil Dead and looking to move on with his career. Irvin Shapiro, a publicist who had helped mastermind the mainstream release of the first Evil Dead, told Raimi he should make a sequel, but Raimi wasn’t interested.

Instead Raimi signed up with Embassy Pictures to make his first studio film, the comedy Crimewave (written by a young Coen brothers), which was supposed to be the next big step up for him.

Ultimately though, Crimewave was a massive disaster. Raimi had a much bigger budget this time – $2.5 million – but with it came the new hassle of studio interference, something his indie filmmaking roots meant he’d never experienced.

Raimi wanted Bruce Campbell in the starring role but the studio stepped in and shot this down, reducing him to a bit part. Executives demanded cuts to the script and made layoffs halfway through shooting.

As I explained in my review of it, Crimewave was an enormous flop and Raimi was left reeling, certain his career was over before it had really begun.

Raimi agreed, partly out of desperation, and it ended up being one the of the best decisions he could have made.

Evil Dead II kicks off with a heavily revised retelling of the original film’s plot, with Ash and his girlfriend Linda (no longer a group of five) heading to an abandoned cabin and unwittingly playing a recorded incantation which summons an evil spirit.

The evil infects Linda, who attacks Ash, but he manages to incapacitate her to make her stop. Okay, he decapitates her with a shovel, but leave the guy alone, he’s stressed.

Ash buries Linda but the evil remains. It grabs Ash and flings him through the woods, which fans will recognise as the famous closing scene from the first film.

The rest of Evil Dead II, then, follows on immediately from where (this revised version of) The Evil Dead left off. Daylight breaks and the evil force is driven away but before too long night falls again and he’s forced back to the cabin, ready to endure a second night of torture.

This comprises partly – but not entirely – of Linda’s headless body coming back from the dead and attacking Ash with a chainsaw, his own reflection attacking him through the mirror and a bunch of inanimate objects in the cabin all joining in and laughing at him.

Most notably though, Ash has to deal with his own hand, which has been infected by the evil and has taken on a life of its own (leading to some hilarious scenes which are perfectly acted by Campbell). This ultimately leads to a bit of DIY amputation, complete with the aforementioned chainsaw.

This would usually be enough for most films but Ash is soon joined by four brand new characters – Annie (the daughter of the professor whose tape summoned the evil in the first place), Ed (her research partner), Jake (a road worker) and Bobby Jo (his girlfriend) – who turn up at the cabin.

Cue more hijinks as Ash is mistakenly accused of killing the professor and unceremoniously locked in the cellar, where more evil awaits. It may seem like I’m spoiling too much here, but trust me: I’m barely scratching the surface.

I’m very much in the third camp, which is adamant that Evil Dead II is the best in the trilogy.

The first film is more of a horror movie. Yes, there are laughs, but for the most part the focus is firmly on the impending evil and there are some scenes – the possession / pencil in the ankle scene, the infamous tree rape – that are straight horror and not intended to make you laugh.

The third movie, meanwhile, is pure comedy. Campbell puts in one of the best performances of his career with just the right mixture of arrogance and ignorance, and you’ll be laughing away from start to finish. But there isn’t a single scare to be found.

For me, Evil Dead II offers the best of both worlds, delivering a mix of horror and comedy that’s so perfectly balanced Goldilocks probably has the film poster up on her bedroom wall.

Any time something horrible happens – Ash’s amputation, an encounter with a massive Deadite later in the film – it’s mixed with just the right level of deliberate absurdity that you’re screaming and laughing in equal measure. You’d probably look like a fucking maniac if anyone saw you.

It also offers what I feel is the best version of Campbell’s Ash character too. In the first film he was a helpless sap getting the shit kicked out of him over and over again by an evil cabin, while in the third he’s a massively confident arsehole who reckons he’s God’s gift to women.

Both are brilliant versions of the character, handled masterfully by Campbell. But the Evil Dead II version of Ash straddles both personality traits, giving us an Ash that’s still far more confident than he ever was in the first film, but nowhere near as cocksure as he is in the third.

Combined, this all results in a film that’s so bloody endearing you don’t mind if some of the supporting cast is a bit forgettable, or that the ending is a blatant set-up for a sequel (which is usually a pet hate of mine).

That said, I’d still recommend you check out The Evil Dead first. It’s still a true horror classic and you’ll appreciate this one better if you see where it came from.

It’s brilliant to see how Campbell’s Ash character has been tweaked and how Raimi – a massive Three Stooges fan – felt more comfortable pushing the slapstick even further this time.

Evil Dead II: Dead By Dawn’s rating earns it a place in the hallowed That Was A Bit Mental Hall Of Fame. Click here to see what else made the grade.

Alternatively, I recommend getting your hands on an Evil Dead Trilogy box set, containing all three outstanding original films. Here’s a UK DVD one and a UK Blu-ray one. Because of licencing reasons, America doesn’t have one.