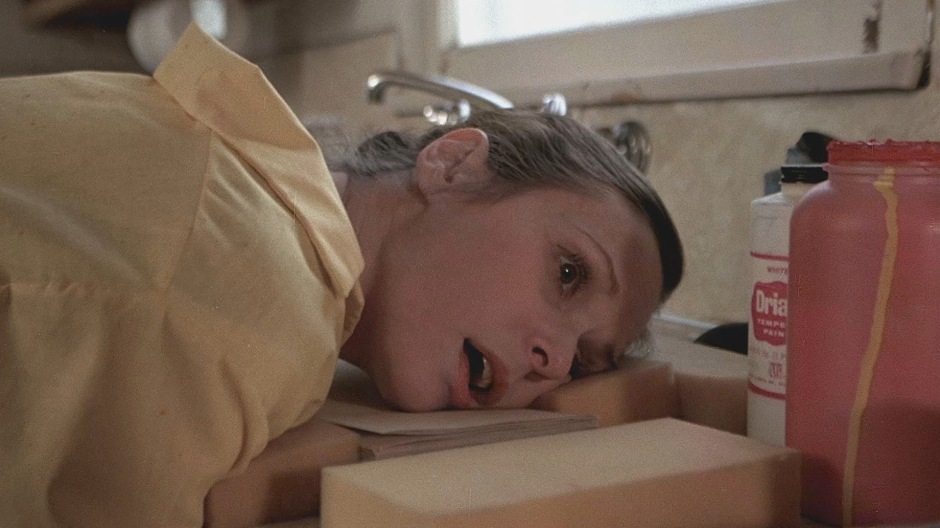 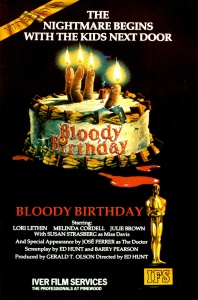 My birthday is coming up soon. I’ll be 32 on 8th April, thanks for asking. Feel free to send me presents.

Even if you don’t, it’s unlikely my birthday will be as grim as that of Debbie, Curtis and Steven, the three 10-year-old villains in Bloody Birthday.

Their dodgy doings begin in the days leading up to their joint birthday, where they find and murder a couple of teenagers shagging in the graveyard.

In fairness though, said randy teens were bumping uglies in an open grave, so they were basically begging for such an ironic death.

Things are kicked up a notch when the local sheriff – who also happens to be little Debbie’s daddy – is also cornered by the trio and beaten to death with a baseball bat.

Why are these tiny kids being such enormous dicks? It’s simple: all three of them were born on the day of a lunar eclipse.

Anyway, next they… what’s that? You need more of an explanation? God, you’re a picky sod. Fine.

It turns out this particular lunar eclipse saw the moon block out Saturn. According to astrologers (well, in this film at least), Saturn is the planet that controls your emotions, and its position when you’re born determines the nature of your personality.

The problem is, with Saturn blocked by our bloody ignorant knob of a moon, the three sprogs are therefore born without emotions and grow up to become cold-blooded killers all too happy to bump off their fellow townsfolk, friends and even family members.

Well, as ‘happy’ as someone without emotions can be, of course.

The only two aware of the group’s evil intents are Timmy – a young lad who managed to escape after the trio locked him in an old refrigerator at a junkyard – and his big sister Joyce, who narrowly avoids their attempt to run her over with a car, also at the junkyard.

They’re shite at killing people at the junkyard, is what I’m basically saying.

It’s up to Timmy and Joyce to put a stop to the three wee shites before they kill more people but that’s obviously easier said than done, because who’s going to believe them?

Bloody Birthday is something of a forgotten slasher, one that’s rarely mentioned when horror fans bring up other ‘seasonal’ films like Halloween, Black Christmas, April Fool’s Day or Graduation Day.

It’s a shame, because while it may not be as shocking or graphic as other slashers, it does still have a unique charm that makes it worth watching.

One thing fans of Halloween will note, however, is how often Bloody Birthday shamelessly lifts from John Carpenter’s classic (which had only been released three years prior).

Joyce is very much the Laurie Strode of the film, introduced with similar shots of her walking along an idyllic suburban neighbourhood.

Just like Annie in Halloween, her friend Beverly is an outgoing brunette whose dad is a police officer: at one point he even pulls over next to them to make sure they’re okay, as in Carpenter’s film.

And both Joyce/Laurie and Beverly/Annie have to keep an eye on younger kids while their parents are away, though this time instead of babysitting Tommy and Lindsey they’re the older sisters of Timmy and Debbie.

Where it differs from Halloween – other than the obvious age and quantity of its killers – is in its levels of gore, nudity and suspense, of which it respectively offers slightly more, plenty more and significantly less.

Most of the kills are clean but there’s one particularly wince-inducing moment involving an arrow in the eye, offering the sort of visceral offing Michael Myers didn’t indulge in the first time around.

As well as arrows in the eyes, it’s even less shy to shove breasts into them at the slightest opportunity, keeping the more easily pleased male teens in the audience happy.

It isn’t, however, a scary film. Not in the slightest. Even though the thought of young children killing people should conjure up the likes of Children Of The Corn and Village Of The Damned in your mind, this doesn’t come close to matching those in terms of atmosphere or fear factor.

Instead, when you see a wee dick who looks like a young Egon Spengler grinning away as he runs around firing a gun at people, you don’t feel the need to run from him. You feel the need to give him a stiff boot in the arse.

Go into Bloody Birthday expecting healthy helpings of cheese and you’ll have a good time with it. It isn’t too gory and it isn’t scary in the slightest, but watch it in a group and you should have fun shouting abuse at the wee pricks.

HOW CAN I SEE IT?
Bloody Birthday is only available on Blu-ray in the UK, though it’s a pretty nice transfer given how unimportant the film is in the grand scheme of things. In the US it can be found on both DVD and Blu-ray.