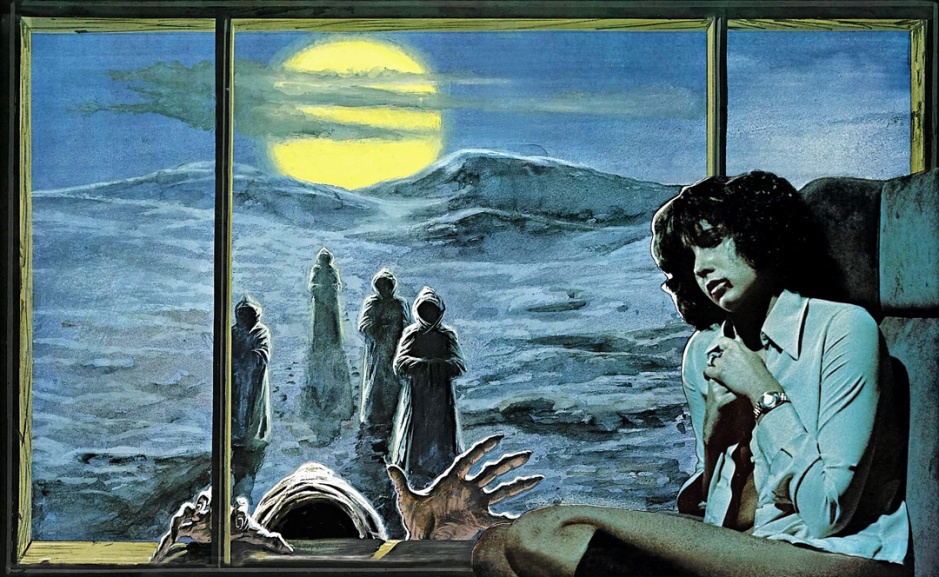 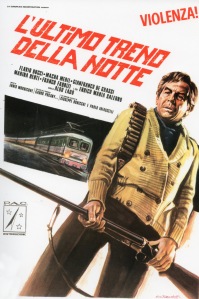 Also known as: Late Night Trains (UK VHS release), Last Stop On The Night Train (US), New House On The Left (US)

In 1972, Wes Craven wrote and directed The Last House On The Left.

Based on Ingmar Bergman’s 1960 film The Virgin Spring, it was a bleak film in which two teenage girls are encountered in the woods by a trio of criminals – two men and a woman – who proceed to rape and murder the girls.

Fleeing from the scene, the three seek refuge in the home of a friendly couple, who by sheer coincidence are the parents of one of the girls. When the parents discover what has happened, they decide to get revenge, with gory results.

The Virgin Spring had come and gone without much hullabaloo, being a classy Swedish art film and all. But The Last House On The Left was grim and sleazy enough to spark a grindhouse genre of its own: the revenge film.

I Spit On Your Grave, Naked Vengeance, even modern films like Baise-moi, all fall into this genre. But of all the revenge films that followed in the wake of The Last House On The Left, Night Train Murders is perhaps the most similar in terms of plot.

Indeed, the only major difference is that, as the title suggests, this one takes place on a train instead of in the woods.

Margaret and Lisa are two friends studying at a school in Germany. Deciding to stay with Lisa’s family in Italy over the Christmas period, the two get an overnight train to Verona, where Lisa’s parents will pick them up in the morning.

Also on the train are a pair of hoodlums, who hopped on board at the last minute while escaping a chasing policeman. And further down, in another carriage, is a nymphomaniac woman in her 30’s looking for a good time.

As you’d imagine, the five eventually find themselves together in the same carriage, at which point all manner of nasty shit ensues.

Given that there’s some sexual violence here, it goes without saying that Night Train Murders makes for uncomfortable viewing at times.

However, despite the notoriety it’s ‘enjoyed’ over the years as one of the 72 video nasties, its subject matter is handled with a surprising degree of tact.

If you’re expecting lashings of gratuitiously exploitative nudity and gore, then you’re not going to find much of it here.

Barely a ketchup sachet’s worth of blood is spilt over the course of the film, and the nudity extends to a few seconds of a bare bum as one of the victims tries to run away. The sexual violence is also kept mercifully brief.

It’s all a bit tame then (well, as tame as it could be) and at times is actually quite stylish, with some interesting shots and the lighting getting progressively darker as night falls and the girls’ situation gets bleaker.

There’s also an attempt to get some social commentary in there, though it’s slightly jarring, with the film frequently cutting to a dinner party at Lisa’s parents’ house where everyone’s discussing the state of society and the like.

Special mention should go to master composer Ennio Morricone’s soundtrack, which is fairly minimalist compared to most of his more well-known work but almost becomes a character in its own right.

His simple harmonica theme, played by one of the killers, is often heard before he’s seen, giving the audience a heads up that shit’s about to go down before it does.

Of all the video nasties I’ve seen to date, Night Train Murders is by no means the most shocking.

Its subject matter certainly makes for uncomfortable viewing, especially during the 15-minute period where all five characters are together and the dodgy deeds take place.

However, it’s all handled in a reasonably respectful manner and resists the temptation to go down the graphic route like so many other films in the genre, making it easier to stomach.

HOW CAN I SEE IT?
Night Train Murders is coming to Blu-ray in the UK at the end of the month, courtesy of 88 Films (who kindly provided a screener for this review). It’s a lovely transfer and includes a 20-minute interview with Irene Miracle, who explains how awkward she felt during the dodgier scenes.

There’s also a DVD version already out in the UK courtesy of Shameless Screen Entertainment, who treat the subject matter with significantly less respect than the film itself does with the tagline ‘whore aboard’.

In the US, both the Blu-ray and DVD versions were released by Blue Underground. However, only the upcoming 88 Films UK Blu-ray release features a choice of audio: either the English dub or the original Italian dub with subtitles.