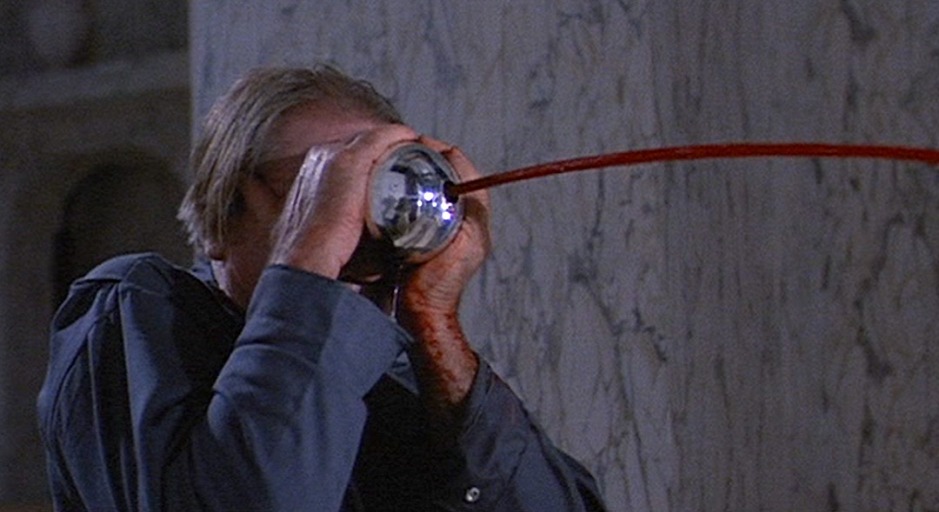 “You think when you die, you go to heaven? You come to us.” (The Tall Man, Phantasm)

When most people think of iconic horror movie villains they tend to reel off the usual suspects: Jason, Freddy, Michael Myers, Chucky and the like.

However, one particular evildoer was doing his nefarious deeds long before most other slasher baddies got their blades wet. His name is the Tall Man, and he’s the villain in cult ’70s horror Phantasm.

The film takes place in a small Californian town which, when we join it, is mourning the apparent suicide of one of its residents. We’ve already seen in the opening scene that it was actually a murder, though, so it’s clear hijinks are due.

Sure enough, 13-year-old whippersnapper Mike sneaks into said stiff’s funeral and, after the guests leave, is stunned to see an incredibly tall man approach the coffin, lift it all by himself and, instead of burying it, dump it into the back of a hearse instead.

Mike can’t believe what he’s seen and tells his brother Jody what happened. Naturally, Jody’s having none of it so Mike decides to head to the Tall Man’s mortuary to see what the proverbial dilly-o is.

This is where things get odd. Well, odder. At the mortuary, Mike is attacked by a flying metallic sphere with a large spike on it.

He dodges the sphere at the last minute and it attaches itself to a mortuary worker instead, drilling into his forehead and spurting his blood out the other side of the ball. It’s an awesome little trick to watch, nasty though it obviously is.

After being attacked by the Tall Man and chopping off one of his fingers, Mike takes the still-twitching, yellow blood-dripping digit as evidence and shows it to his brother, who finally believes him.

Time to pay that Tall prick a visit and see what’s happening to all the dead folk in town, then.

I love Phantasm. It’s just so bizarre and filled with so many “um, what the fuck just happened” moments which aren’t properly explained until a couple of movies down the line.

It’s said the original film was going to be over three hours long until director and writer Don Coscarelli realised that would be madness and hacked it down to 90 minutes instead. This would certainly explain the unexplained moments peppered throughout the film.

Just what are the flying balls all about, and how do they work? Why can the Tall Man seemingly transform into a blonde woman at times? Why does he have an army of midgets?

What’s the deal with the weird fortune teller woman in town, and how come we never find out what happens to her granddaughter when she enters the mausoleum and we hear a scream?

And, just a tiny, minor point, but why exactly does the mausoleum contain a portal to an alternative world where midget slaves are seemingly building something in a strange red alien desert?

The answer, it would appear, is “because this is Phantasm, shut up”. And it’s one I’m perfectly happy with, actually.

I love how bizarre this film is. I love how Coscarelli must have known how confusing the story had become after he hacked it in half, and didn’t care because it clearly made for a more interesting (if mystifying) movie.

I also love the cast chemistry. You’d completely believe Mike and Jody were brothers, and when ice cream salesman and folk guitarist Reggie turns the pair into a trio it makes for a genuinely likeable group of friends.

Finally, the ending is brilliant. I’ll have to include a fairly huge spoiler below so if you plan on seeing it I’d suggest skipping to the final paragraph.

The whole “it was just a dream” twist has been done so many times that it’s considered nothing more than a cop-out, and rightly so.

But Phantasm adds an extra twist to it by not only saying it was a dream, but that in reality Mike’s brother Jody had been killed in a car crash a few weeks prior.

It’s a small detail but it’s a important one, as it reveals to us that the horror film we’ve been watching may have contained scary moments, but also sweet moments of bonding between two brothers, taking place in the subconscious of a young boy whose brother has been taken away from him forever.

It makes you see the film in a different light. Early on, for example, when Mike tells the fortune teller he’s scared his brother is going to leave home for good, its double meaning suddenly becomes clear.

If you’re looking for a horror film that offers something different and will have you saying “well, I never saw that coming” at least a couple of times between its moody opening scene and surprising twist ending, Phantasm is the one. Just don’t try to make sense of it all or your mind will start crying.

Phantasm‘s rating earns it a place in the hallowed That Was A Bit Mental Hall Of Fame. Click here to see which other films have made the grade.

HOW CAN I SEE IT?
Phantasm is only available as a standalone DVD in America. It’s in the UK where the options are – as well as the standalone DVD you can also get a five-disc box set featuring all four films, or – the best of the bunch – a stunning killer sphere-shaped version of the same box set.