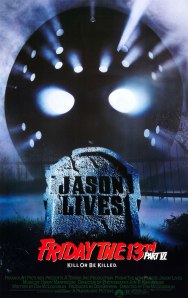 “I went to go cremate Jason… but I fucked up.” (Tommy Jarvis, Friday The 13th Part VI: Jason Lives)

After pissing off long-time Friday The 13th fans by releasing a sequel in which Jason wasn’t actually the killer (see my review of Part V: A New Beginning), Paramount wasn’t taking any risks with the sixth film. That’s why Friday The 13th Part VI comes with a fairly definitive subtitle that states, yes, Jason is alive and well in this one.

Not that his resurrection makes a lot of sense, mind. After surviving a Friday film for the second time, Tommy Jarvis (now played by a third actor, the frustratingly spelt Thom Mathews) escapes from his mental institution, heading to Jason’s grave with his friend to convince himself he’s gone once and for all. After digging up the grave he sees Jason’s rotting body. Nice one, job done.

Except it isn’t, because Tommy decides he wants to drive a metal pole through Jason’s corpse, an act that comes back to munch on Tommy’s arse when a lightning storm hits the pole and brings Jason back to life, all zombified and annoyed and that.

Thus marks the beginning of the ‘zombie Jason’ era in Friday The 13th lore. Before he was just a man – a lumbering, powerful mountain of a man, mind you, but a man nonetheless – but in his resurrected state he’s an undead, unstoppable zombie hell-bent on turning everyone in his vicinity into a mushy pulp.

Realising he might have done something a bit silly, Tommy heads to the nearby police station, where the sheriff – aware of Tommy’s history and not willing to accept Jason is back in Crystal Lake – locks him in a cell.

Meanwhile, a new summer camp is just about to start up, and one of the counsellors is the sheriff’s daughter, who takes a liking to the imprisoned Tommy. Ooooh, it’s like Eastenders or summat.

If nothing else, credit has to be given to Jason Lives for featuring a summer camp that actually has children in it for once. Usually, due to the inevitable issues that come when shooting a film with child actors, slasher films set at summer camps tend to take place a few days before the camp opens, with all the trainee counsellors hacked to bits before a single kiddiewink arrives at the camp.

By pushing Part VI a bit further back so the camp is actually full of children, then, what inevitably resulted in countless headaches for the film crew also gives an extra sense of dread to proceedings, as there are now a bunch of genuinely vulnerable targets running around.

Deep down you know none of them will be killed (though not all slashers stick to that unwritten rule: see Sleepaway Camp), but it keeps things tense anyway.

Not that we’d have been subjected to a gory slaughter even if Jason had offed the sprogs, mind you. The Friday The 13th series has always had a hate-hate relationship with the MPAA (the American ratings board), and Part VI in particular suffers from some heavy censorship.

Almost every death was cut more than Jason’s victims themselves, leading to a series of disappointing, anti-climactic moments that hint at something gruesome but quickly cut away.

That’s not to say there aren’t any inventive deaths in there. Over the course of the film’s 86 minutes we’re treated to a total of 18 kills, including a ripped out heart, a spear in the mouth, a triple decapitation with a machete and a head being crushed with Jason’s bare hands. It’s just a shame so much clearly had to be compromised and as such we barely get to see any of the special effects crew’s handiwork.

Um, that analogy makes me uncomfortable, so I’ll stop now.

HOW CAN I SEE IT?
Friday The 13th Part VI: Jason Lives is available on standalone DVD in the UK and US. Here’s the UK version

and here’s the US version (though it’s worth bearing in mind the former is completely devoid of any special features).

If you’re craving a more overall Friday The 13th experience you have three choices. In the UK your only main option is this DVD box set, which contains DVD versions of Friday The 13th Parts 1-8.

This same DVD box set is also available in the US, though by far the best option is the recently released Friday The 13th: The Complete Collection Blu-ray box set. This is only available in America but I can confirm it’s region-free (I bought it myself). It’s also currently the only way you can get Jason Lives on Blu-ray.

Did you enjoy this review? There are 100 more just like it in That Was A Bit Mental: Volume 1, the first TWABM ebook. Get it today!