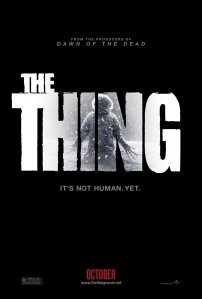 Legend has it the 2011 version of The Thing was originally going to be a remake of a remake. John Carpenter’s fantastic 1982 movie was already a newer take on 1951’s The Thing From Another World, and Universal’s original intention was to remake the Carpenter version and give it a CGI update.

It’s said, however, that the film’s producers managed to convince Universal to make a prequel instead, because in their eyes Carpenter’s version was already perfect and remaking it would be like “painting a moustache on the Mona Lisa”. This refreshing moral stance (if the story’s true, mind) led to what we have here, a film that instead focuses on the unknown events that led up to the Carpenter film, one based on the Norwegian research camp that discovers the Thing before it gets to Kurt Russell’s team in the ’82 film.

Kate Lloyd (Winstead) is a graduate palaeontologist who specialises in ice-based excavations. When an Antarctica research site uncovers a huge alien spaceship hidden under the ice, Kate is asked to join the team to help them study it. Oh, and the big alien monster they find trapped in the ice. Guess what happens next.

As in the ’82 film the “Thing” has the ability to change its shape and imitate any living organism it makes contact with, so once it inevitably escapes from its icy prison the film, like its predecessor, becomes as much about the crew’s lack of trust for each other as it does the monster itself.

There are further nods dotted to the original film throughout, some of which are fairly obvious (the origins of the odd two-headed corpse found by Kurt Russell in the 1982 version are finally explained, and the end credits sequence fits nicely in with the start of Carpenter’s film) while others are more subtle additions that only die-hard devotees of the original would notice.

For example, in one scene during a battle with the Thing, one character swings an axe and it gets stuck in the wall. They’re told to leave it in case it’s infected, so they do. While this scene is fairly throwaway, fans of the 1982 film may remember a scene where some characters find and explore the Norwegian camp, during which an axe can be seen stuck in the wall.

While The Thing actually does an impressive job of trying to live up to the Carpenter classic, it does eventually run out of steam and the whole “who can you trust” thing takes a back seat. The film then essentially becomes a standard slasher movie where the monster stalks around trying to kill people, who every now and then look at each other as if to say “wait a minute, are you a monster? No, probably not”.

And when Mary Elizabeth Winstead’s character eventually does her own metaphorical transformation and essentially becomes Ripley from the Alien films, right down to actually entering the Thing’s spaceship and hiding in its air ducts, the film loses its identity a little. Even its variation on the famous blood test scene – where it’s instead decided that anyone with a filling in their teeth can’t be the Thing because it’s not organic, hence the quote at the top of this review – is, while tense, a little disappointing.

That said, while The Thing 2011 doesn’t quite have the same magic, immaculate timing and atmosphere as the near-perfect The Thing 1982, it’s still much better than the majority of other recent films “inspired” by classics. Fans of the Carpenter classic should give this a go, if only to see its take on what happened before Kurt Russell and chums encountered one of cinema’s greatest monsters.