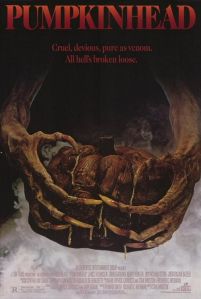 Ed Harley (Lance Henriksen) is a bit of a hillbilly. He lives in a house with his young son, who makes him a necklace thing for seemingly no reason. The next day a few bikers come to the village and run his son over, killing him. Lance is clearly pissed off (and rightfully so), so he seeks out a crazy old woman who teaches him how to make a demon based on his rage that will seek vengeance. And so Pumpkinhead is born. Cue mindless killing of the bikers.

Pumpkinhead is a huge monster (even the action figure dwarves the other ones in the series), but all it seems to do to the people it kills is put its hand over their head and pick them up a bit. That’s extremely fucking weak. The plot’s also a bit simple. Boy dies, man goes mad, enlists the help of a demon which then kills people. Meh.

The fact that it’s from the ’80s is no excuse. Pet Sematary still scares me to this day. But this was just poor. There are two ‘jump’ scares in the film. One just isn’t scary (Henriksen’s dead son sits up in the car next to him) and the other’s poorly timed (a dog wanders slowly into the frame to a dramatic musical sting). And as impressive as Pumpkinhead looks, it doesn’t seem that it could do any harm at any point, especially given that its main party trick is the old “picking people up by the head” routine. Give me a pointy stick and I could probably take the bastard.

Yes, there are a couple of deaths, but they all happen off-screen so we don’t really know what happens. The only one that’s sort of shown is when Pumpkinhead uses the tried and tested “pick up by the head”, climbs a tree then drops the person he’s carrying. Naturally however, we don’t see the impact. To be fair, there’s one clever moment where an unfortunate chap is impaled on a rifle, but that’s about it. 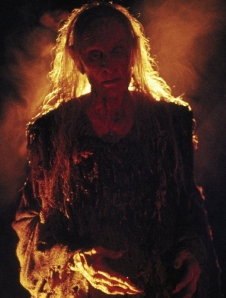 Incidentally, the story for Pumpkinhead was based on a poem by Ed Justin. Here’s how it goes:

Keep away from Pumpkinhead,
Unless you tire of living
His enemies are mostly dead,
He’s mean and unforgiving
Bolted doors and windows barred,
Guard dogs prowling in the yard,
Won’t protect you in your bed,
Nothing will, from Pumpkinhead

Oddly, it doesn’t mention anything about Lance Henriksen’s son getting his head caved in.

Sorry to say, Pumpkinhead isn’t too great. If you’re a special effects junkie it’s certainly worth a watch to see the great Pumpkinhead puppetry (with Stan Winston directing it’s no surprise the monster looks great), but I wouldn’t make it top of the priority list if I were you.